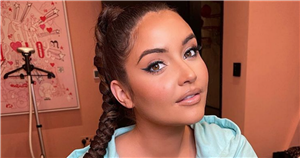 The mum-of-two is said to have trademarked the name NIXIE for the range, which was reportedly approved last month.

According to The Sun, she will be selling up to 17 different beauty products for hair, face and body as part of her company Ella Oil Ventures Limited.

Ella is the name of Jacqueline’s first-born daughter, who she welcomed with ex-TOWIE star husband Dan Osborne in 2015.

The actress, 28, is also mother to daughter Mia and stepmother to Dan’s son Teddy from a previous relationship.

Jacqueline made her name playing Lauren Branning in Eastenders, taking up the mantel from previous actress Madeline Duggan from 2010-2019.

The brunette beauty met husband Dan, 29, in 2013 at an awards ceremony, and they got married in 2015, nearly a year after having their first daughter, Ella, together.

Jacqueline set up her company Ella Oils Limited last year, and it is reported on Companies House as ‘retail sale via mail order houses or via internet’.

Another business owned by Jacqueline is her performing arts company, EMJ Entertainments.

Since being crowned the queen of the jungle on I’m a Celebrity in 2019, Jacqueline has been kept busy with different projects including a clothing range with In the Style.

Jacqueline’s husband Dan’s tattoo shop was forced to close during the Covid-19 pandemic.

He addressed Instagram followers last year saying: “People assume that because you've been on TV once, that you're rich. No! I have to make a living as well.”

Dan, who recently said he and Jacqueline "understand each other" and "his mistakes are in the past now", appeared on TOWIE for two years and came third on the 2018 series of Celebrity Big Brother, where he was reportedly paid £60,000 for his appearance.

Jacqueline moved in to a £1.2 million Essex mansion earlier this year with husband Dan and daughters Ella and Mia.

Their luxurious new home boasts six bedrooms, a fireplace and garden, large kitchen and study, with her own walk-in wardrobe attached to the master bedroom.

Jacqueline set up Instagram page, At home with the Osbornes, posting pictures and videos of the home they’ve been renovating since March.