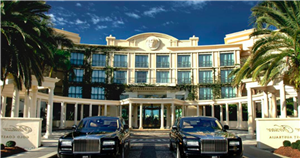 It's less than two weeks until I'm a Celebrity…Get Me Out of Here! is back on our screens, and this year, it's making its long-overdue return to Australia.

Having spent the last two years being filmed at Gwrych Castle, north Wales, due to the Covid pandemic, viewers will be excited to see some of their old favourite show features as the celebrities make their entrance to the Australian jungle.

However, on their exit from the jungle, there is one feature that won't be the same – and that's the jungled-up celebrities entering the gleaming foyer of the Palazzo Versace Hotel upon their elimination, which is where the celebrities usually stay post-eviction until the end of the series.

Despite the luxury hotel – said to be £1,000 a night to stay – being used by ITV since the show started in Australia in 2004, the broadcasters have decided to take the celebrities somewhere different this year as they'll be staying at JW Marriott Gold Coast Resort and Spa, where rooms start from £256.

The Sun reports that a TV insider said: “ITV has used the Versace ever since the series came to Queensland in 2004. Those classic scenes of the muddy, exhausted celebs arriving in the glamorous, gleaming lobby are part of I’m A Celeb’s very fabric.

“The new hotel is lovely, but just different to the bouji opulence of the Versace, which is so well-known to viewers.”

There are expected to be a few changes in the format of the show as it bounces back to its home of Australia following the pandemic.

A source told The Sun: "We’re constantly looking at ways to refresh the show and being away from Australia during the pandemic gave us the opportunity to look at all aspects of the show including the hotel the celebrities stay in upon their jungle exit – for the new series we'll be using a different hotel on the Gold Coast."

Whilst the JW Marriott Gold Coast doesn't quite match up to the opulence of the Versace Palazzo, the celebrities are by no means going to be slumming it (apart from when they are actually in the jungle).

The JW Marriott Gold Coast hotel boasts ocean view rooms and a stunning pool area, although it's expected to cost ITV less for the celebrities to stay here than the Versace.

It looks set to be an exciting series, as celebrities such as former Love Island star Olivia Attwood, radio DJ Chris Moyles, Hollyoaks' Owen Warner and Coronation Street's Sue Cleaver have arrived in Australia ahead of the show's launch.

Also expected to be joining the cast is singer Boy George and – in what is sure to be a massive coup for the show – none other than Mike Tindall – husband of the late Queen's granddaughter Zara Tindall.