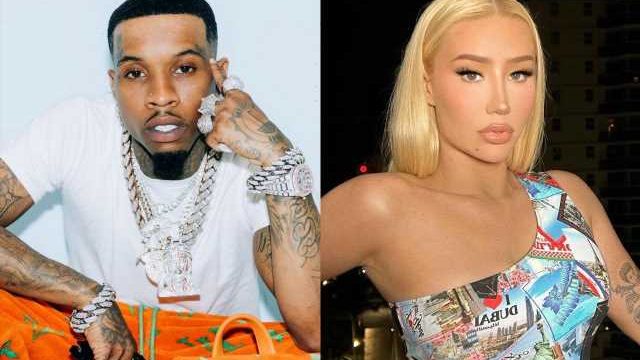 Social media users quickly weigh in on the supposed romantic relationship between the ‘Black Widow’ hitmaker and the ‘Luv’ emcee after they are pictured looking cozy during an outing.

AceShowbiz –Iggy Azalea has apparently found love again in another fellow rapper, nearly two years after calling it quits with Playboi Carti. The Australian femcee has been rumored to be dating Tory Lanez and there’s new evidence that seems to support the claim.

On Thursday, June 30, Gossip of the City’s Twitter account obtained and released a picture of the “Fancy” hitmaker and the Canadian star hanging out together. They looked cozy during their meet-up, sitting together on a couch with the mother of one resting her hand on his knee.

According to the Twitter account, “Tory Lanez and Iggy are messing around . It’s been going on for a few weeks now.”

Social media users quickly weighed in on the supposed relationship between Iggy and Tory, with one warning the “Black Widow” raptress, “Not Iggy messing with Tory went from a vampire to an abuser smh.” Another thinks that Tory is bad choice of boyfriend for Iggy, tweeting, “Iggy if you really messing with Tory, why? Like you think you learned your lesson from Carti.”

Some others spoke in favor of Tory, while believing that Iggy would be a bad influence on him. “Tory Lanez ain’t learn his lesson from messing with them female rappers Trina, Kash Doll, Joseline, DreamDoll, Megan thee stallion, Melli, and now iggy… that boi wild,” one claimed. Another chimed in, “iggy and tory?! Ikyfl. Iggy is bad vibes. She does it to herself. I still blame ti.” Another fan defended Tory, “Why people coming at Tory lanez for dating/f**king iggy that is a single man his life ain’t end when Meg lied on him.”

Meanwhile, others think that it’s no one’s business if Iggy and Tory are indeed dating or not. “People saw a picture of Iggy Azalea & Tory Lanez sitting down talking and just assumed the two are f**king. I could never be famous, that is insanity,” one person clapped back at the commenters. Another echoed the sentiment, “Look at there h**s in the comments yapping if Tory & iggy fooling around thats their business NOT outs and no matter wat yall say ain’t s**t u can do about it. Hang it up flat screen.”