“By the end of this trilogy, in 20 years, you’re going to look back at these movies as the greatest history lesson of our times, and yet they’re slasher movies,” Halloween Kills star and actress in six pics in the franchise Jamie Lee Curtis tells us on Hero Nation today.

The movie has already beat the preview theatrical grosses of A Quiet Place Part II with $4.85M, while also debuting on Universal’s Peacock streaming service today. It’s a film, per the actress, that was conceived, much like the 2018 reboot, well ahead of its time. You can listen to our riveting conversation with Curtis below:

With the 2018 version of Halloween becoming the most successful film in the franchise with $255.6M while speaking greatly to the #MeToo era, Curtis explains that Halloween Kills is “about the collective trauma, concentric circles of trauma and violence that take place in a community, the collateral damage that takes places in a community.”

“It’s about (Laurie Strode’s) daughter and granddaughter having to step into the maelstrom of circling of masses of people and mob violence because I’m rendered impotent by the wound. I’m a wounded warrior, I cannot fight and they now step up,” explains the actress who first originated the role of Strode in the 1978 movie.

“It was written in 2018. We shot it in 2019 and we held it for a year right when all of the social uprisings were happening, the protest marches, the riots, all the police brutality marches were happening,” says Curtis.

“And then in Janury of this year, there was another uprising and another and we watched when mob violence takes over.  Whatever political side you’re on…misinformation propelled mob violence to a really terrifying point. So, it’s prescient of David Gordon Green, Danny McBride, Scott Teems to write two movies that predated the social uprisings.” 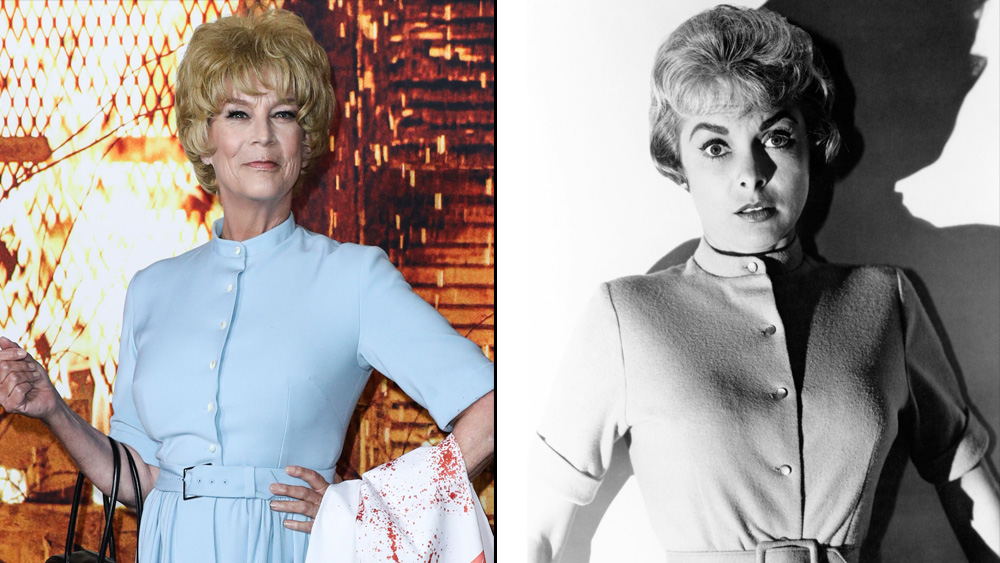 Outside of the interview, Curtis informed Dominic and I that her costume at the Halloween Kills premiere was a version worn by her mother, Janet Leigh, in Alfred Hitchcock’s Psycho : Specifically, the version played by Scarlett Johansson, who Curtis has championed from the sidelines in the actress’ legal crusade against Disney with Black Widow, in the 2012 movie Hitchcock.

Also Curtis spills the beans as to whether there is another season of Scream Queens or not.