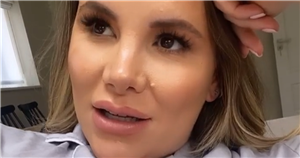 TOWIE star Georgia Kousoulou has announced she will no longer be a full-time cast member as she prepares to welcome her first child.

As she approaches the end of her pregnancy, Georgia has decided to take a step back from the show to focus on parenting her newborn with boyfriend Tommy Mallet, 28.

The mum-to-be, 29, described her final day of filming as “an end of an era” as she announced the news to her 1.3 million followers after the cast wrapped up filming series 28 of the popular reality series.

As she reflected on her time on the show, she said: “We’ve finished filming TOWIE, it all feels very real, I'm not gonna lie, it's been an emotional day for me. “I know I'm not leaving for good but it is going to be different, life as I know it is changing and I don’t think I'm gonna be a full time cast member anymore."

The Essex native will be switching to a part-time role on the show, adding that she wants to be a “care-free, does what she wants, films when she wants” kind of mum.

She was quick to reassure fans that this isn't going to be the end of her time on the show though, stating she will be back with the baby to catch up with her co-stars.

She continued: “I am gonna have a little bubba that I’m gonna have to add into the equation. But don’t worry TOWIE fans I will be back with the baby.”

The TV personality said she thinks she’s ready for the baby's arrival but joked that it has just dawned on her that she is going to be a mum, despite how far along she is in her pregnancy.

“I feel like I’m just realising that just now and I've been pregnant this whole time that I'm actually going to be a mum not just a dog mum, a mum," she explained. Georgia and Tommy announced that they are having a baby boy in a sweet gender reveal back in February, which they shared with their fans in a video posted on Georgia’s Instagram page.

The sweet clip, which garnered over 1.4 million views, saw the couple surrounded by multicoloured balloons as they counted down to pop them with their little Pomeranian dog, Monkey, by their side.

Fans were quick to congratulate the loved-up couple on the social media platform. Another added: “Congratulations what amazing news. Best News of 2021. I wish you and Tommy had your own show lol at home with Georgia & Tommy … becoming parents ITV better snap up my idea lol.”