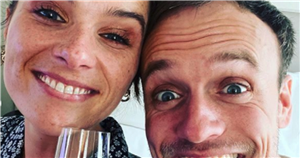 Chelsea Halfpenny has revealed she's engaged to be married to actor James Baxter.

The 29 year old, who is best known for her portrayal of Emmerdale character Amy Wyatt, took to her Instagram feed to announce the happy news as she shared a series of photos of them together throughout the years.

The first snap showed Chelsea wearing a floral shirt with a pair sunglasses on her head as she smiled for the camera while her other half, 30, looked ecstatic. The actress flashed her gorgeous engagement ring, which featured an emerald rock.

Another saw the pair laughing together in front of a poster of dogs, while a third showed them in hysterics as they drank beer outside.

"Obv changed his name to ‘FIANCÈ [green heart emoji]’ immediately on my phone."

She added: "Also congrats to my 14-year-old self on managing to get the boy with the spikey hair that she fancied so much." followed by a heart eyes emoji, Champagne flutes emoji and a stars emoji.

Celebrity friends were quick to comment as Charley Webb wrote: "Basically the best news of life," with a white heart emoji.

Sammy Winward chimed: "The best news in life!!!! So happy for you both. The dreamiest couple and that ring!! Actual heaven xxxx," alongside a pink heart emoji and a stars emoji.

Chelsea and James have been together for three years.

James played Jake Doland on hit show Emmerdale from 2007 to 2009, which means the pair did not actually overlap on set.

Earlier this year, Chelsea took to her Instagram feed to share a sweet snap of her significant other sitting on a boat as he smiled for the camera.

Gushing over him on his special day, she wrote in the caption: "Happy 30th Birthday you beautiful human.

"I love you so much that I’ll make toast for us both and give you the one that looks the best.

"You are silly, you take things too far, you burp too much, and you are ridiculously thoughtful and kind and funny and I’m pretty set on being with you on the longggggg term. @jamesbaxterrealtalk," with a white heart emoji.