The London-born model and actress calls out Internet trolls who criticize her as a mother, posting on her Instagram Story, ‘nobody deserves to be told by strangers that they’re a s**ty mother.’

AceShowbiz –Emily Ratajkowski isn’t here for people judging her parenting skills. The mother of one has clapped back at her haters who criticize her for the way she takes care of her son Sylvester, reflecting on how those Internet trolls were no better than when people mom-shamed Britney Spears.

The 30-year-old model/actress took to her Instagram Story on Friday, July 16 to slam the critics. “We are all reflecting back on shaming Britney [Spears] and calling her a bad mom,” so she wrote along with her selfie taken in her car. “We talk about how we have to ‘do better’ as a culture. Meanwhile, my comments are filled with awful remarks about how I don’t deserve to be a mom. Shame on you all.”

The London-born beauty went on lamenting the hate culture. “I don’t care if you hate me or hate celebrity (or just hate women) but it’s incredibly scary to become a parent and nobody deserves to be told by strangers that they’re a s**ty mother,” so she concluded her post. 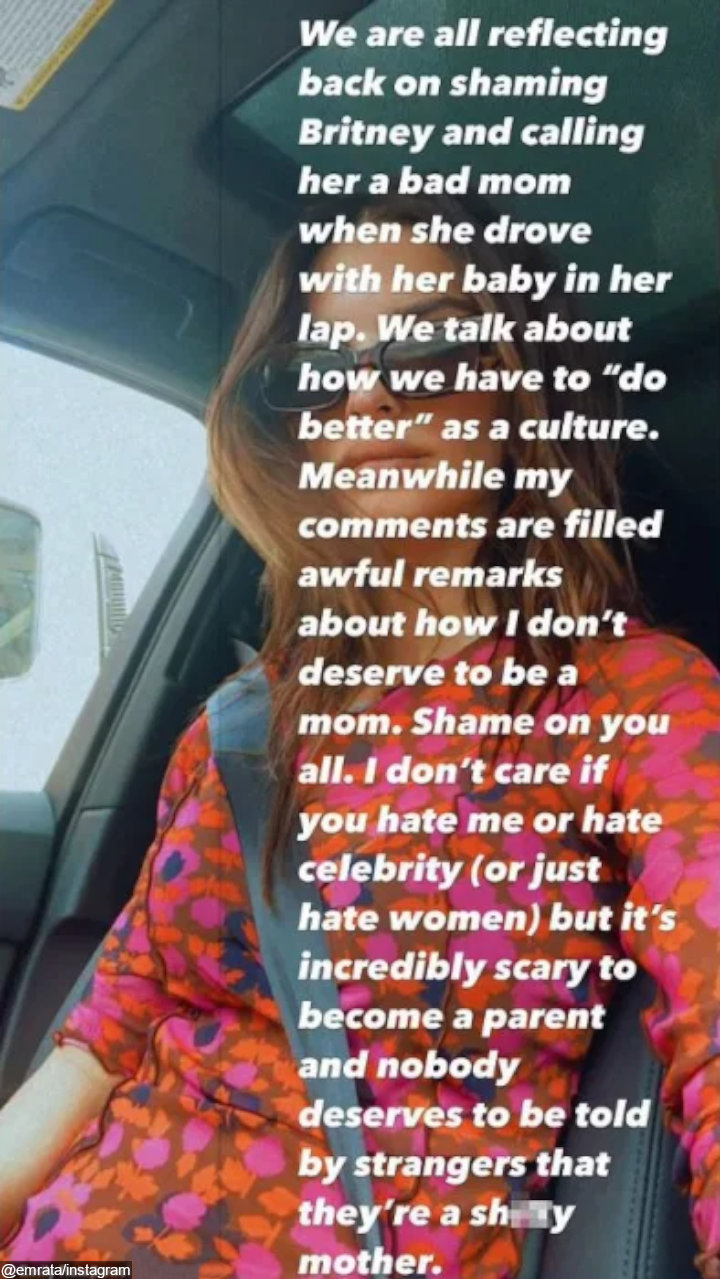 Emily Ratajkowski clapped back at haters mom-shaming her.

Emily’s parenting skills have been heavily scrutinized since she welcomed her son and first child with her husband, actor and producer Sebastian Bear-McClard on March 8. Last month, the “Gone Girl” actress was put on a blast for the way she held her then-3-month-old baby in one arm while showing off their matching swimsuits via Instagram.

One of the critics was Piers Morgan, who tweeted at the time, “That’s not how you hold a baby @emrata – and your millions of followers shouldn’t be encouraged to do the same.” The former “Good Morning Britain” presenter added, “Happy to give you some tips if you need them.”

Emily subsequently disabled the comments on the sweet shot with her son before deleting the photo altogether from her Instagram page.