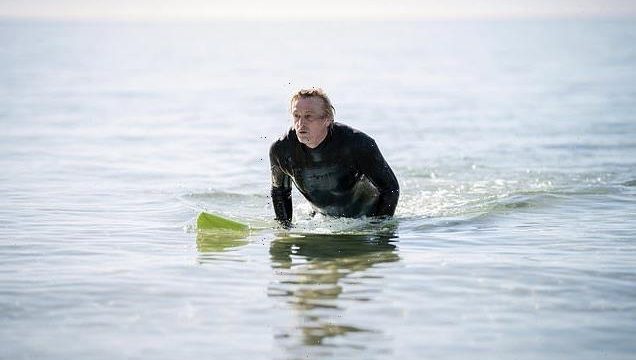 CHRISTOPHER STEVENS reviews last night’s TV: Death in the surf and a thriller that’s on a downer Down Under

The fountain of eternal youth used to bubble up somewhere in the Aussie city of Erinsborough, on a cul de sac called Ramsay Street.

So many of its famous Neighbours have proved ageless. When Scott and Charlene (Jason Donovan and Kylie Mynogue) returned for the series finale this year, they still looked barely more than teens. The likes of Donna and Mike (Margot Robbie and Guy Pearce) are forever young, too.

So what the heck has happened to Shane Ramsay? Peter O’Brien, the actor who played him for the first two years of the soap’s run in the mid-1980s, looks as lined and craggy as an Easter Island statue.

O’Brien stars as surfer dude Sean, in the thriller Riptide (C5), and his face is so deeply fissured that I worried he might crumble into dust if not handled gently. 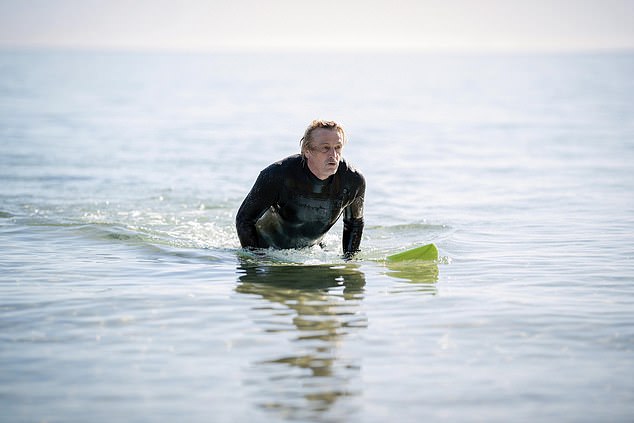 All credit to him for refusing, unlike so many actors of his generation, to have cosmetic surgery. But even all the Botox in Hollywood couldn’t fix him. Those wrinkles need Polyfilla.

Sean looked as ancient as Methuselah but he wasn’t acting his age as he embarked on a second marriage to his masseuse Alison (fellow soap star Jo Joyner, from EastEnders).

They were trying for a baby – to the seething fury of his ex-wife, their son, plus Alison’s ex-husband and her truculent teenage daughter. Then Sean announced he was changing his will, and went surfing.

Within hours, the police helicopter was searching for his body. They needn’t have bothered. When an Easter Island statue falls off a surfboard, it’s bound to sink.

Up to this point, Riptide was a cliched but enjoyable mystery thriller, with plenty of dramatic aerial shots showing the roiling surf.

But it got bogged down in grief, as Alison slid into a depression and hung around sobbing with the bloke next-door whose wife had just died from cancer.

A maudlin memorial service was held, where characters queued up to remember what Sean was like when he was young – and when his face looked less like a dried-up riverbed.

This added nothing to the plot. It was just a downer, down-under.

Miriam Margolyes was down-under too, but that was little surprise because she’s been everywhere lately – roaming Scotland in a campervan with Alan Cummings, cooking a Dickensian Christmas dinner at her London home, popping up on This Morning.

She’s even rumoured to be the voice of a monster called Beep the Meep on Doctor Who next year.

Perhaps there’s more than one of her, which is an alarming thought. The Miriam Margolyes who presented Australia Unmasked (BBC2) announced she’d lived in Oz for decades and even took Aussie citizenship 10 years ago.

Why they put up with her, I don’t know. For the first ten minutes she was constantly making jibes about the country’s history as a Victorian convict colony.

Visiting Tasmania, she stayed with a sheep farmer and his wife, and baited the man that his ancestors had exploited criminals for ‘slave labour’. That’s not just rude, it borders on racism.

And in case anyone thought she wasn’t being obnoxious enough, she asked the woman whether she’d married the man for his money. This couple were letting her stay and giving her dinner, remember.

The meal turned out to be roadkill wallaby. If it gave her indigestion, she deserved it.

Because this is BBC2 and not C4, Miriam tried to tackle serious subjects, learning about the island’s history of homophobia and its current problem with illiteracy.

But none of that stopped her spattering conversation with F-words, or breaking wind, which she does so frequently that it’s practically her catchphrase.

I’ve had more than enough of her now.