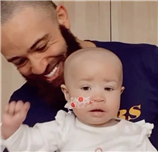 Ashley Cain has shared a heart-shattering tribute to his late daughter on Instagram.

In a moving Instagram post on Monday, The Challenge cast member honored little Azaylia by sharing a throwback video of himself playing with his baby girl, who tragically died of leukemia on April 24 at just 8 months old.

Cain did so in honor of what would have been her ninth-month old birthday.

“I’m finding it hard to look through photos and videos at the moment.

“So I blindly scrolled through and posted the first video my finger landed on. & what an beautiful video it was!”

Cain and girlfriend Safiyya Vorajee both confirmed their infant’s passing late last month, following an October diagnosis … and many months’ worth of keeping social media followers aware of her status.

“What a strong, clever, brave and beautiful little girl you were. My champion, my hero… MY INSPIRATION!

“#AzayliaDiamondCain FOREVER IN MY HEART.”

Cain also wrote on his Instagram Stories that he and Vorajee have “lit candle at home so we can celebrate” their daughter’s life.

“I LOVE YOU CHAMP,” the reality star wrote alongside a video set to The Lion King’s “Circle of Life,” which featured a corner of the house decorated with flowers and photos of Azaylia.

Relatedly, Vorajee also posted a video of rainbow she had spotted while driving home, writing in a message addressed to her little girl,

:”You show us a rainbow to let us no your here. Azaylia you are powerful, beautiful and incredible.

“you fill my soul when you show me these signs that we ask for.

“I’m so proud of you princess I love you so so much.”

Cain and Vorajee recently announced that they plan using part of the more than $2.2 million raised for Azaylia’s treatment to start a charity in their late child’s name.

They confirrmed as much via GoFundMe on Saturday, writing:

“After days of emotional yet careful consideration we have decided that, firstly, we would like to use some to give Azaylia a magical and deserving send off – something that we believe you would all want to be a part of.”

“Secondly, we will use the remaining money to help other children through a new charity we are setting up in Azaylia’s name,” they continued.

“She has guided us throughout this process and it only feels right that we continue to use the platform we built together to help those in similar situations.”

The grieving mother and father then thanked everyone who donated and showed support, noting that the funds needed for Azaylia’s potential treatment in Singapore were raised in the first 24 hours.

That money can sadly no longer be used to help Azaylia but we want to make sure it is used positively – and in Azaylia’s name,” they explained.

A few weeks before she passed, Cain revealed that Azaylia had “days to live,” after doctors found cancerous tumors throughout her body.

“What we saw during our time fighting this monster has changed us forever and we will spend the rest of our lives spreading Azaylia’s message of hope and strength to all those who need it,” Cain and Vorajee wrote over the weekend.

“We will ensure she lives on until the day we are able to hold her again in paradise.”