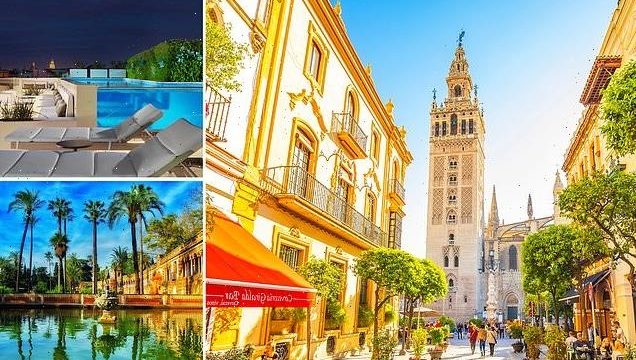 Forget Paris and Venice! Google has revealed that sunny SEVILLE is currently its most searched-for flight-only destination… here we reveal why it’s so popular

Every week our Holiday Hero Neil Simpson takes an in-depth look at a brilliant holiday topic, doing all the legwork so you don’t have to. This week: mini-breaks in Seville.

Seville is set to rival glamorous stalwarts such as Paris and Venice as one of the year’s most popular city-break destinations.

Google has revealed that the sunny Spanish city is currently its most searched-for flight-only destination, with travellers attracted to its mix of grand cathedrals, royal palaces, flamenco shows, orange trees and over-sized sculptures.

‘Seville is perfect for long weekends as it’s not too overwhelming but it’s got a surprisingly large amount to see,’ says Manuela Almagro of the Visita Sevilla website. ‘Most first-time visitors run out of time and come back for more.’ 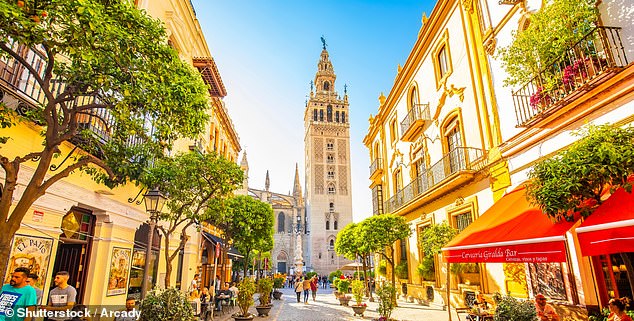 The first big-ticket attraction of Seville is its imposing Gothic cathedral – the biggest in the world and the final resting place of Christopher Columbus.

As well as a riot of turrets and flying buttresses, it promises one of the world’s most unusual bell towers – inside the 350ft Giralda Tower there are sloping floors rather than steps, as it was designed to allow patrons to reach the top on horseback. Visitors today can stroll up to reach a viewing platform.

Nearby, tourists can also step inside a working palace at the Alcazar Real.

An official residence of the Spanish royal family, it’s the oldest continually occupied palace in Europe and opens up a series of ceremonial salons, some with richly decorated golden domes. 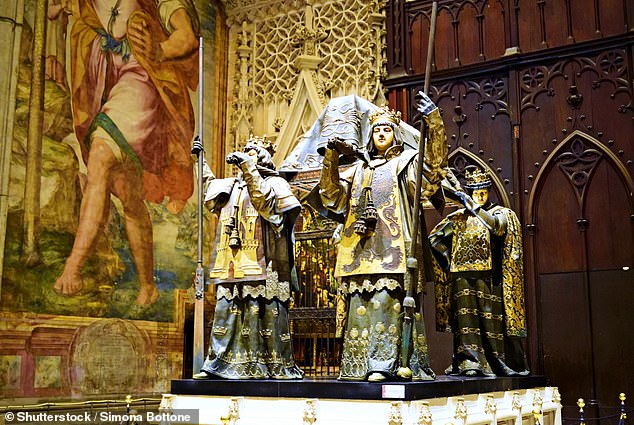 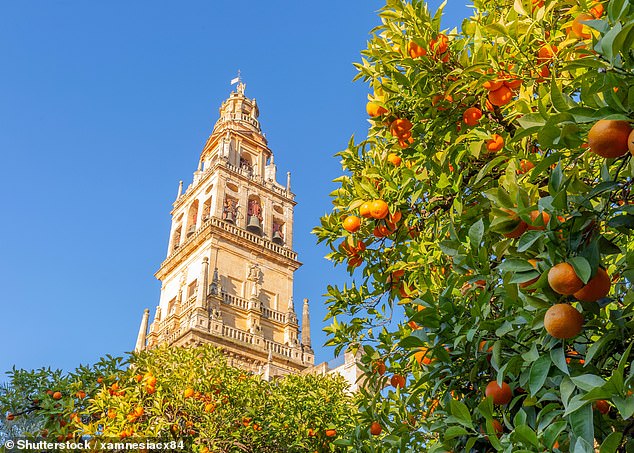 Inside the 350ft Giralda Tower (above) of Seville’s cathedral, there are sloping floors rather than steps, as it was designed to allow patrons to reach the top on horseback

The impressive and imposing gardens, with palm trees, peacocks and reflecting pools, have starred in everything from Lawrence Of Arabia to Game Of Thrones.

Audio tours bring the complex to life, or join a guide for a three-hour wander around the palace and cathedral, including Giralda Tower, from £45 (getyourguide.com).

Outdoor concerts are held at the palace in spring and summer, and details can be found under ‘Nights in the Gardens’ at visitasevilla.es.

As the birthplace of flamenco, dramatic dance shows are another of Seville’s night-time attractions. 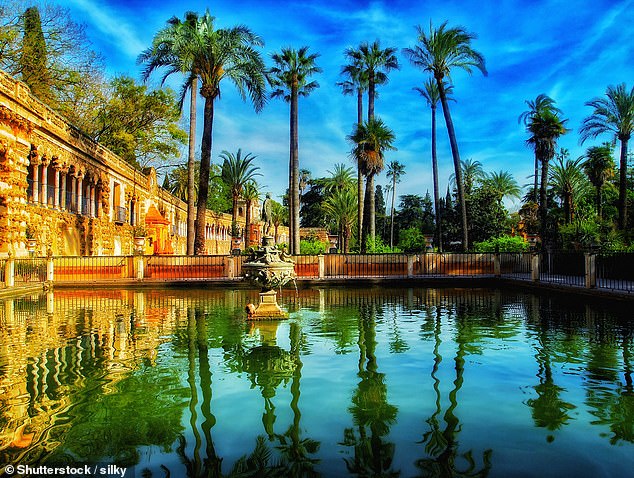 Explore the Alcazar Real, above, an official residence of the Spanish royal family 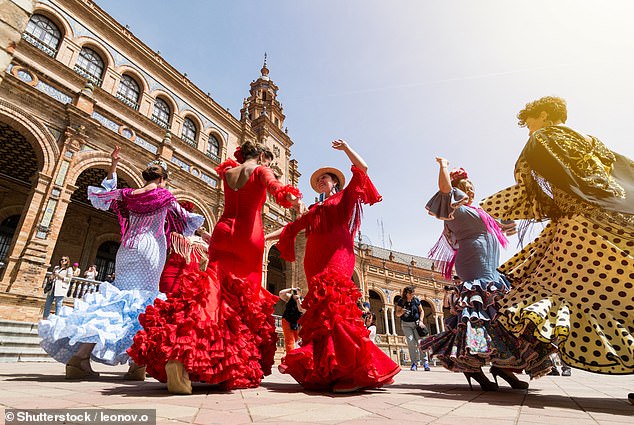 A host of theatres and ‘tablaos’ around the city put on shows, with Teatro Flamenco, Los Gallos Tablao and Tablao el Arenal among the best known. Hour-long dance classes at many venues start at about £55pp.

Otherwise, head to the Royal Tobacco Factory, now part of the University of Seville, to see where Bizet found inspiration for his opera Carmen.

Modern Seville is on display at the Setas de Sevilla, or Mushrooms of Seville. The six huge structures create the biggest free-standing wooden sculpture in the world, hovering over an underground museum and covering an entire city square.

You can take the lift to the top, then follow the ‘footpath in the sky’ to a series of viewpoints on the summit. Tickets cost from £12pp (setasdesevilla.com).

Great food and shopping can round off a Seville city break. Tapas bars abound, while stalls laden with seafood, fruit, ham and bread spill out of Triana Market. Here, information boards also tell the story of the Spanish Inquisition that terrorised the area in the 15th Century. 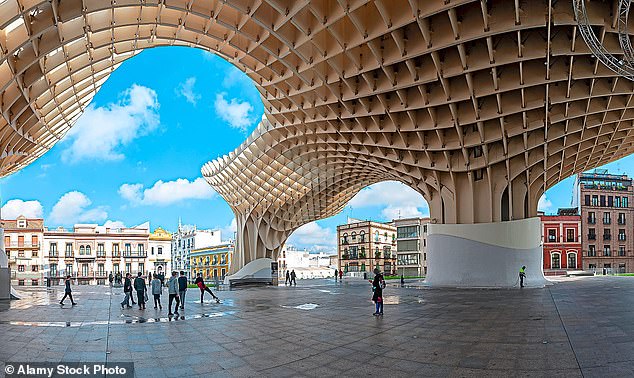 Wooden wonder: The imposing Mushrooms of Seville (pictured), known as the biggest free-standing wooden sculpture in the world 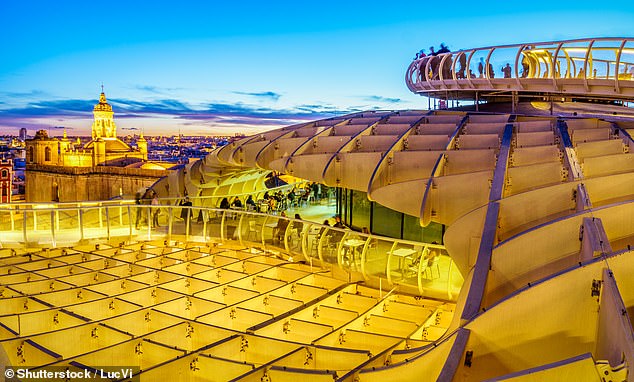 Pottery is for sale everywhere in Seville, and it is worth paying a visit to the pretty Ceramica Triana, an emporium packed with colourful, locally made ceramic tiles that resemble those found on buildings across the city.

Hotels worth checking out include H10 Casa de la Plata, with a rooftop pool, from £92 per night, and the boutique Corral del Rey hotel, in a converted 17th Century mansion, from £269 per night.

Direct flights to Seville take under three hours and cost from about £50 return with Ryanair, easyJet, British Airways and others. Trailfinders is offering three-night breaks including flights, transfers and hotels from £295pp (trailfinders.com). 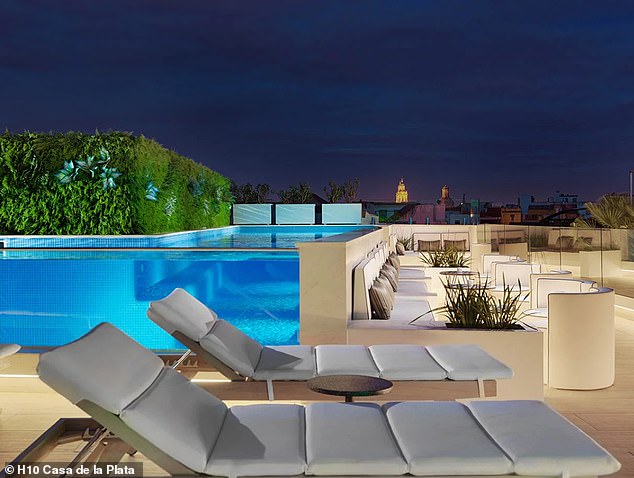 Hotels worth checking out include H10 Casa de la Plata, with a rooftop pool, from £92 per night