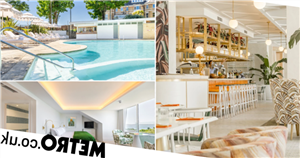 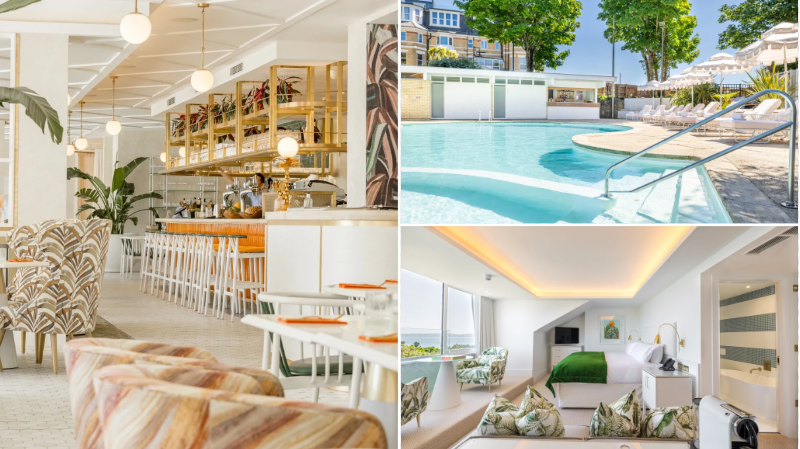 Walking into the cool white lobby of The Nici, the first thing I’m greeted with is a piece of modern artwork that says MY AMI – geddit?

And indeed, despite having just got here by walking from Bournemouth station down through a slightly generic high street and past a somewhat soulless leisure complex, I feel as if I’ve entered a different dimension.

Heading through to the art deco-style, pale green and white checkered-tiled terrace outside, to catch my first glimpse of the azure sea beyond, the feeling intensifies. Am I in boring old Blighty or… Miami?

Back inside, the decor veers from splashy, oversized tropical print wallpaper, to a scattering of modern artworks.

Some of the 73 rooms have hot tubs – mine features a decked terrace with sunloungers, a massive bed as plump and comfy as a marshmallow, and a small gold and glass cocktail trolley bearing a decanter with a jigger or two of complimentary rum.

There’s a small pool in the grounds, with plans to install a bigger infinity pool for next summer (to be followed by a spa).

Two antique bronze palm trees flank the entrance to the restaurant, aptly named South Beach, where you can feast on the likes of BBQ cauliflower steak (£12), beef short rib (£18) or fish and chips (£16).

In a town full of traditional guesthouses and B&Bs, The Nici’s slick style and art-focused design stand out.

All the artwork – from an image of Che Guevara painted on to Cuban cigar moulds, to kitsch renderings of Americana, such as pink Cadillacs – was directly sourced or commissioned by the hotel’s creative director, Anthony Rudolph.

Locals of all ages have been flocking here. The staff reveal they’ve also had visits from former guests of the Savoy, the dated 80s hotel that became The Nici, and which used to be owned by coach company Shearings.

Their packages catered largely to the blue rinse brigade, some of whom have been back to see how it’s changed and have apparently had a blast.

The beach, reached by the winding West Cliff zig-zag path, is just moments away and stretches for ten miles all the way to Poole.

Further along the coastline is the Russell-Cotes museum, a sumptuous Victorian villa with pretty gardens owned by a rich family who loved collecting art, including some dreamy pre-Raphaelite paintings (entry £7.50).

In the town centre, department store Bobby’s, established in 1915, has opened a contemporary art gallery on the second floor.

The posh resort of Sandbanks is just 15 minutes’ drive away.

Try a Scandi experience by booking a session at the new Saltwater Sauna on the promenade (from £50 for up to five people).