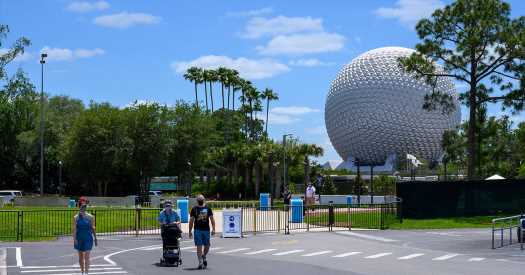 After being closed for more than a year, Disneyland in Anaheim, Calif., will reopen on Friday to residents of the state only. Travel advisers around the country said tickets and reservations sold out quickly, and people have been waiting online for hours to get a reservation.

Though Disney has not said when non-California residents will be allowed in, that doesn’t keep people from hoping.

“I have a file filled with families waiting for Disneyland to open up to non-California residents,” said Staci Kimball, a senior adviser with Glass Slipper Concierge, a travel agency that specializes in luxury Disney trips. “They know they can go to Walt Disney World, but there’s so much nostalgia for the original park.”

As more people across the United States are vaccinated and as summer approaches, park bookings are picking up, despite the fact that children are still not eligible for the coronavirus vaccines.

“Things were slow for some time,” said Greg Antonelle, the chief executive of Mickey Travels, a travel agency that helps plan Disney trips. “People are tired of being cooped up, not going on vacation. The fact that so many people have gotten the vaccine helps and that we can clearly say there have been no outbreaks in a park also helps.”

Disney would not comment on how many cases of Covid-19 had been linked to park visitors, but no large outbreaks have been reported.

Mr. Antonelle said that his company, which exclusively books Disney trips — 10,000 of them in a typical year — had more business in March than ever before (the company had its strongest year of business in 2019) and he anticipates that if bookings keep coming at the pace they’ve been at so far, this will be the company’s strongest year, a sentiment echoed by other advisers.

Ahead of the Disneyland reopening, we talked to travel advisers and park visitors about what to expect at the Disney parks right now.

It takes three steps to get in

Walt Disney World is limiting entry at 35 percent of its normal capacity. Disney has not said whether it will increase capacity anytime soon, but Christine McCarthy, senior executive vice president and chief financial officer for the Walt Disney Company said during an earnings call in February that when the Orlando park started opening it was “at a level less than 35 percent.”

At Disneyland, the company is going beyond the state guidelines, which would allow it to admit out-of-state visitors who have been vaccinated, and limiting visitors to California residents. Groups cannot be larger than three households and park capacity is capped at 25 percent. The company has not said when it might ease those restrictions and would not comment on its plans generally.

One way capacity is being kept in check is by requiring people to make a park pass reservation as well as to buy a ticket in order to enter its four Orlando parks — Epcot, Animal Kingdom, Hollywood Studios and the Magic Kingdom. Disneyland will be using the same system for people to enter its two parks, Disneyland Park and Disney California Adventure Park. Guests who are 3 years old and over need a park reservation and ticket for the same park on the same date.

Here’s the three step process to get both: First, check Disney’s theme park availability calendar in order to confirm that the park you want to visit is available for the date you want. Second, purchase park tickets and log into a My Disney Experience account. Third, make a park pass reservation. The system will only allow you to make a reservation if you have a ticket.

Ms. Kimball suggests checking park reservation availability before booking a flight to Orlando, so you don’t end up with a flight and no way of getting into a park.

“You’re not just buying tickets,” Ms. Kimball said. “You need both a park reservation and a ticket and they have to be linked in the My Disney Experience website or app. If you don’t have both, you can’t get in.”

On social media, people have said that they were not able to get into parks because they had one of the two entry requirements — a ticket or a reservation, but not both.

Bethany Millar, an administrator at a medical school in St. Louis who visited the Orlando park in mid-April, said that she thought Disney did a good a job throughout the booking process on its website of reminding people that they needed the reservation and a ticket.

Ms. Millar, 42, has been to Disney World eight times and said that she felt just as safe in the park this year as she had in previous years, if not safer. She chose to go on a solo trip to the Florida park, leaving her husband and son at home, because she knew she could feel confident there.

“I wanted a place that was magical and storybookish,” she said. “I didn’t want to think about the world. This was my trip. It was for me to ride the roller coasters as much as I want and if I wanted to sit there for six hours and stare at the castle I could, because I knew Disney would worry about Covid for me.”

In addition to placing hand sanitizing stations around the around the park and urging guests to social distance, Disney requires everyone, including people who have been vaccinated, to wear masks at all times, except when swimming or eating.

And forget about strolling while eating: “You may temporarily remove your face covering while actively eating, drinking or taking an outdoor photo, but you must be stationary and maintain appropriate physical distancing during this time,” the Disney website says.

When Mishal Hafeez, 27, visited Disney World from Houston in January, she was struck by how seriously protocols were being followed.

“We were nervous at first because we weren’t sure how Disney was going to be handling precautions,” she said. “But everything was good. People were masked, if not double masked. Castmates were doing a wonderful job keeping everyone in check.”

Ms. Hafeez said that at one point there was a family without masks standing behind her in a line waiting for a ride. Before she could say anything, a castmate asked the family members to put on their masks. She also described hearing several announcements reminding people to social distance and wear masks.

“Disney’s staff did everything in their power to make you feel like you were having a safe Covid experience and I trusted that more than I trust other places,” said Ms. Millar, the solo visitor. “There are mask mandates in other places, but they aren’t enforced like they are at Disney.”

Lines are shorter, experiences have limits

For repeat guests, one of the biggest differences in the parks might be the lack of fast passes, which let holders jump the lines on chosen rides. Everyone has to wait for rides, unless they have a VIP booking through a travel adviser, but with capacity at 35 percent, lines are moving faster than on a normal prepandemic day, visitors said.

“This trip had the shortest lines I’ve ever experienced in my life,” said Anum Syed, a paralegal who lives in Texas and visited Disney World in late January. “The longest was 25 minutes and everything was 15 minutes or less.”

Mr. Antonelle, of Mickey Travels, who lives 10 minutes away from the Magic Kingdom and said he has been to the park more than 100 times since it reopened in July, said that he has noticed lines getting longer since July, but they are still shorter than before the pandemic. (Mr. Antonelle has an annual pass).

Ms. Syed and Mr. Antonelle both said that rides were equipped with plexiglass dividers, and that depending on the ride visitors might be placed in every other car, or that parties would not be mixed within a car (each group would get its own Teacup, for example). There were plenty of signs encouraging social distancing. They and others said that they felt safer in the park than in grocery stores.

“It felt like being in a bubble,” Ms. Syed said.

The parades, fireworks, and nighttime spectaculars that are typical of the Disney park experience are still suspended. Instead of parades that typically draw big crowds of people who line up and sit on the curb, guests who recently visited Orlando parks said there were smaller performances throughout the day. Character interactions are allowed, but have to be socially distanced.

“You can dine inside Cinderella Castle, but guests can’t hug characters,” Ms. Kimball said. “The characters appear and they can still be in the background. It’s still magical and immersive but fits the climate of today’s culture.”

One of the anticipated introductions at the parks has been a scheduling app called Disney Genie, which the company announced in 2019. The app would help people plan their trips and guide them through parks in an efficient way. The app is intended to assist guests in efficiently navigating the parks’ rides and activities, a highly in-demand skill, especially for first-time park visitors.

The app is meant to feel like a personal planner helping game out the trip and make the in-park experience more seamless (a goal that has created an entire industry of Disney-specialist travel advisers). The chairman of Disney Parks, Experiences and Products Josh D’Amaro said in April that the company is still working on the app, and no date has been set for its launch.