AIRPORTS across the UK are already seeing huge crowds and long queues as Brits head abroad on holiday for the first time this year.

From today, holidays abroad are no longer illegal, meaning families can travel to a number of destinations which are on the UK's green list. 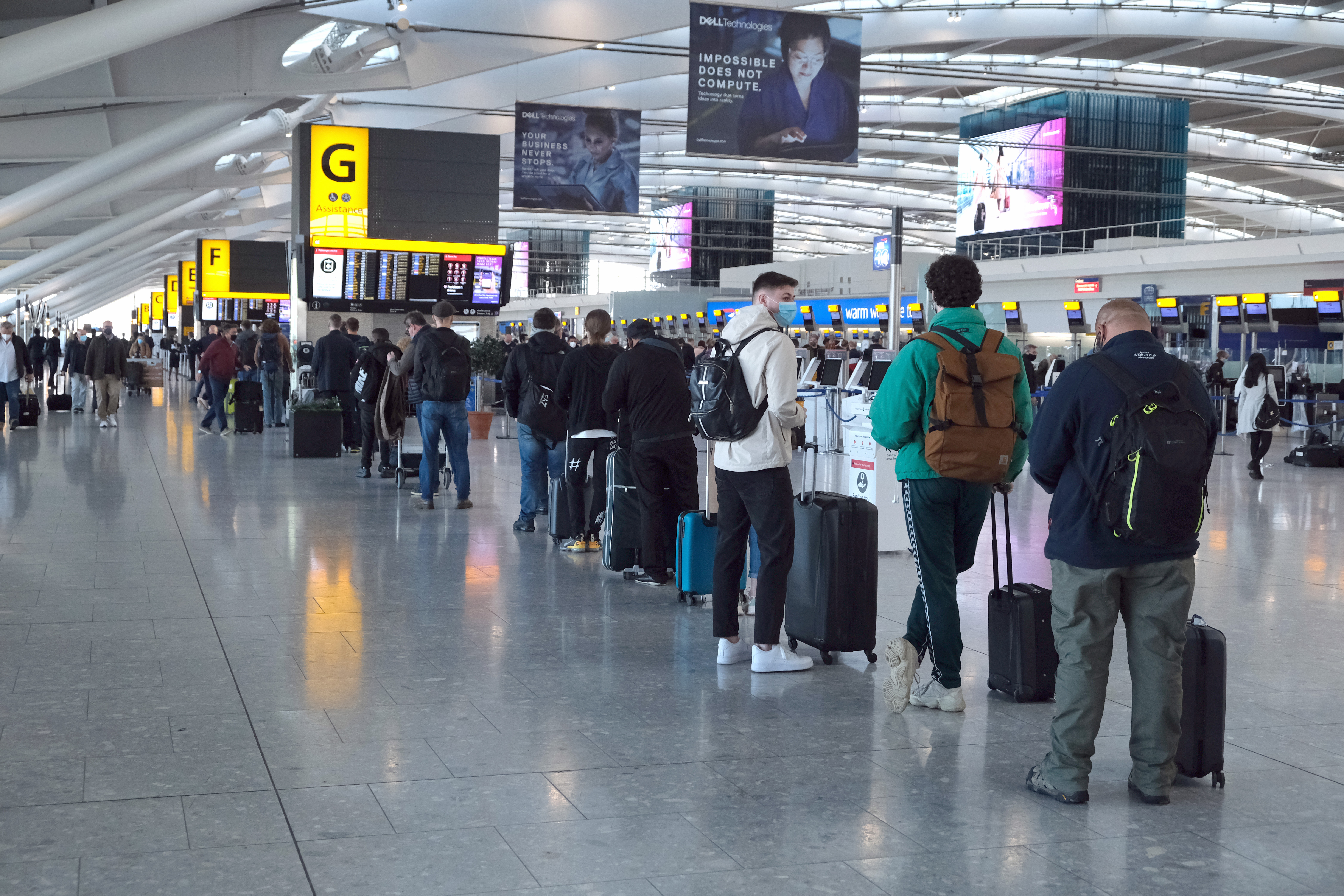 The majority of Brits will be heading to Portugal, one of the few destinations which is open to Brits.

Of the 12 countries on the list, just four are open to the UK, which also includes Gibraltar.

Brits will only need a negative Covid test before returning to the UK, and one on day two – no quarantine is required.

Long queues have been forming at Heathrow and Gatwick Airport since 6am as they prepare for their busiest day of the year so far.

Retired couple Keith and Janice Tomsett, aged 72 and 71, from West Chiltington in West Sussex, said they were "looking forward to" their break to the Portuguese island of Madeira.

As they prepared to board their flight at Gatwick Airport's north terminal, Mr Tomsett said: "We've gone through all the hoops, PCR testing […] after 15 months of being locked up this is unbelievably good."

He joked: "It was even worth getting up at 3 o'clock this morning". 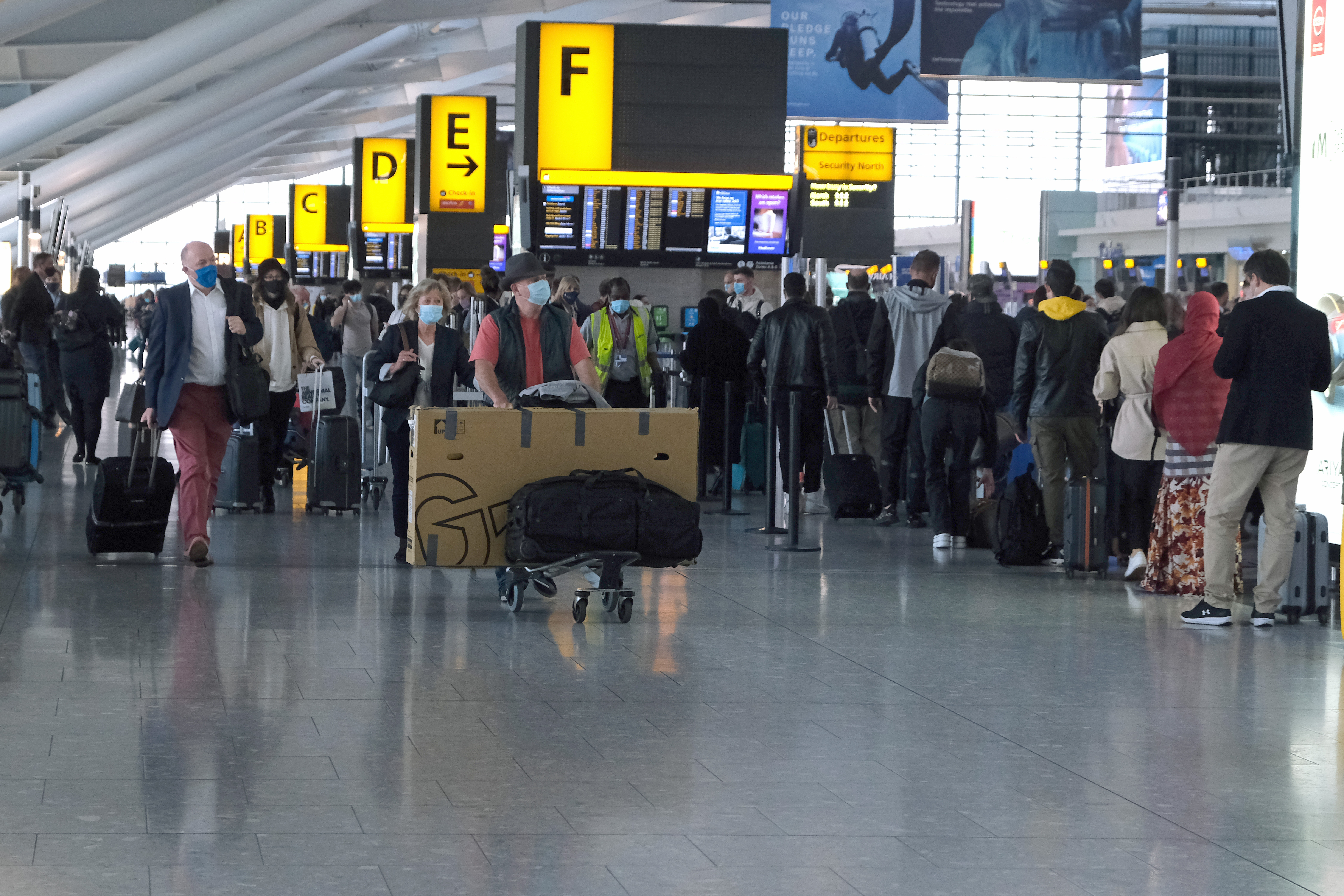 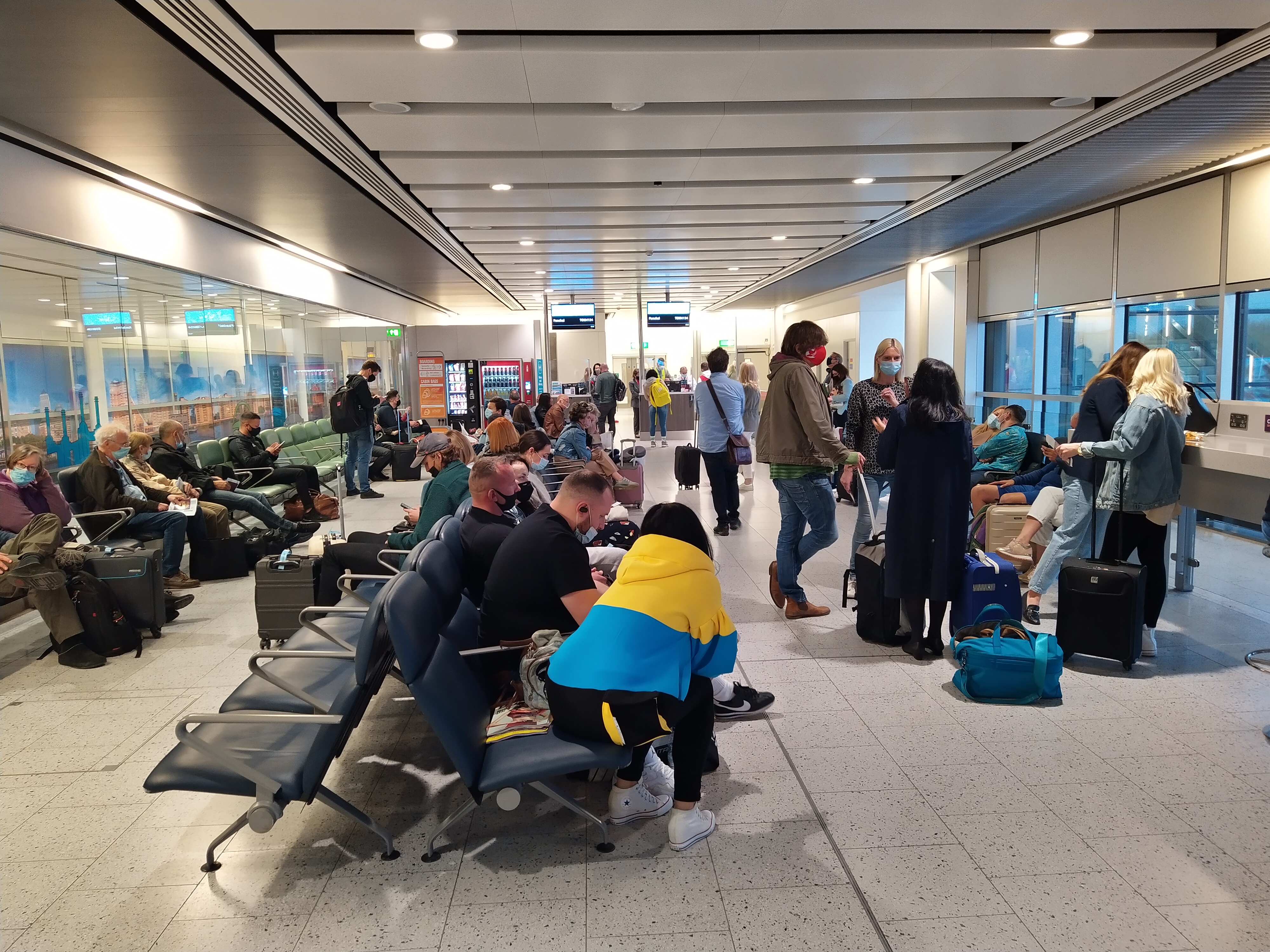 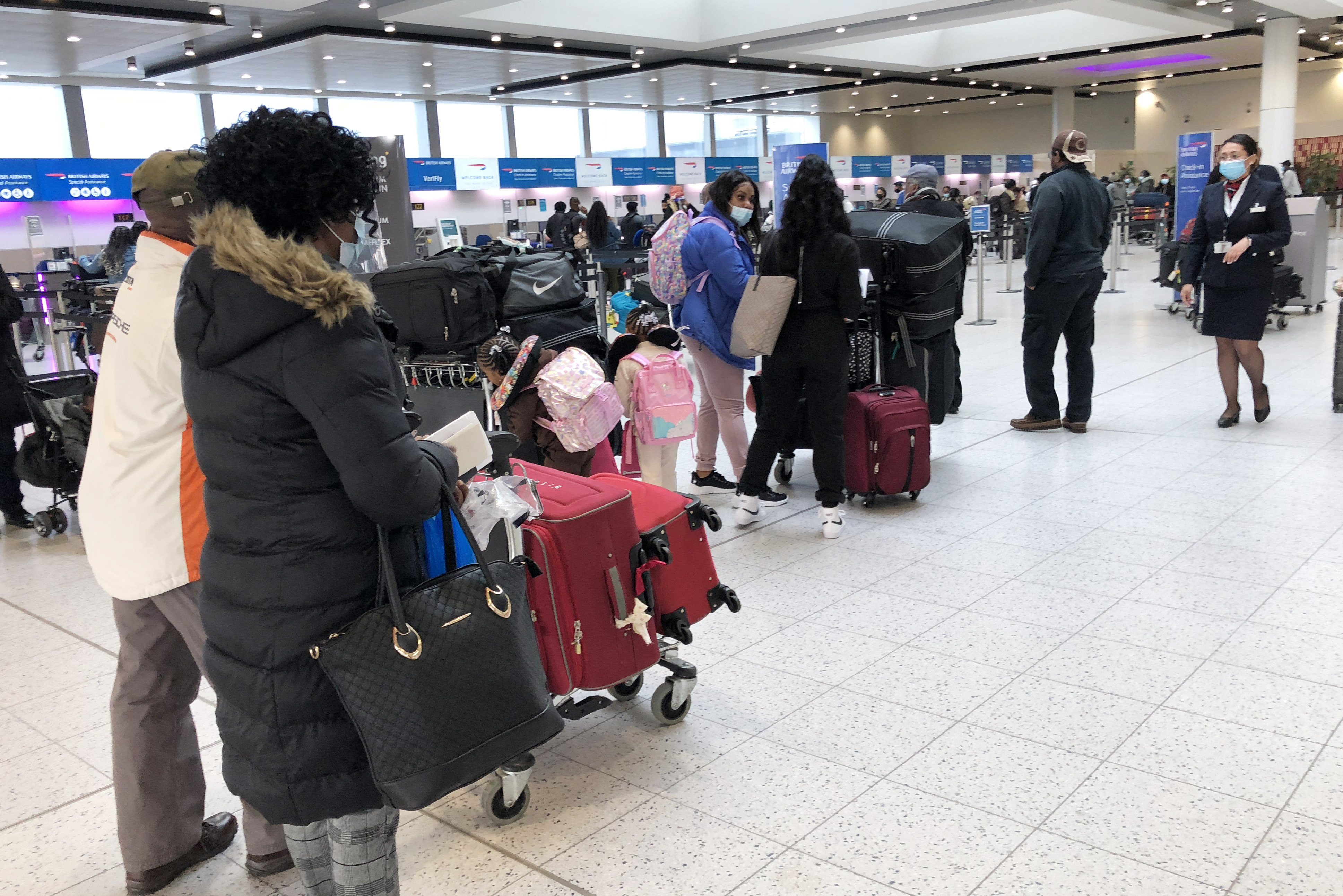 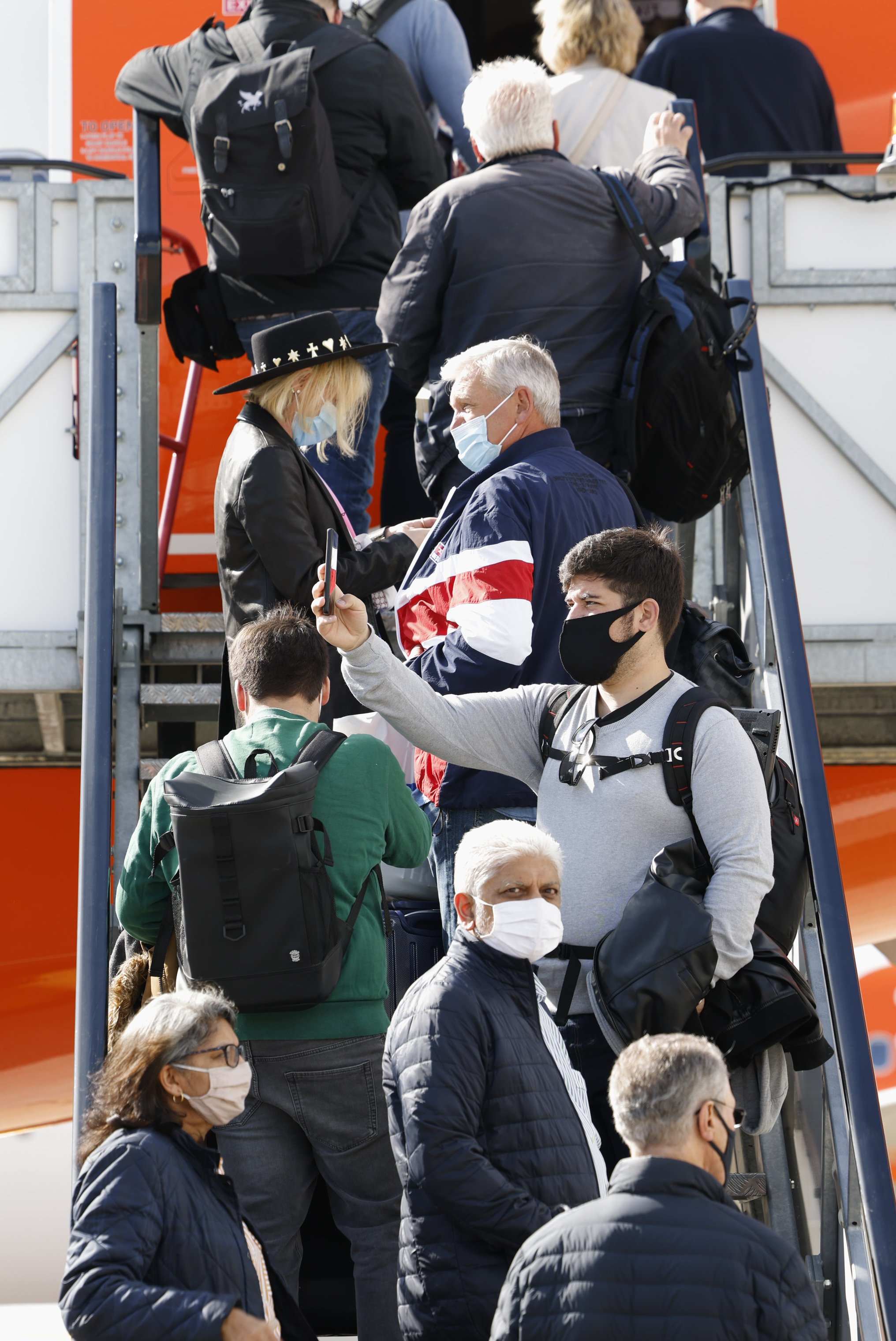 The couple, who are both vaccinated against Covid-19, said they found their pre-flight drive through testing at the airport "easy" but Mr Tomsett expressed frustration at the need to complete another test after returning to England from their holiday.

He said: "We're fully vaccinated, we're going to a green list country and we will be having a test 48 hours before we fly, so why we have to have another one two days later I do not understand."

Restaurant manager Amanda Brown said she "can't wait" to be reunited with her boyfriend, who lives in Faro, after eight months apart and six flight cancellations, as she boarded the first green-list flight from Gatwick Airport.

While queuing for the plane, Ms Brown, 48, said: "I booked this holiday in December but it has cancelled probably about six times now, so this is the first opportunity I've got to fly out."

When asked how it felt to finally be making the trip, she said: "Fantastic, I'm so excited – I didn't sleep properly last night – so yeah it's amazing, I love it – it's really good to see everything going back to some kind of normality.

On the testing and airport process, she added: "I found it quite easy going through the airport, no queues or anything really.

"There's a bit of anxiety on the build-up because obviously you have to take a test before you go, it was a bit anxious waiting for the result to come back through." 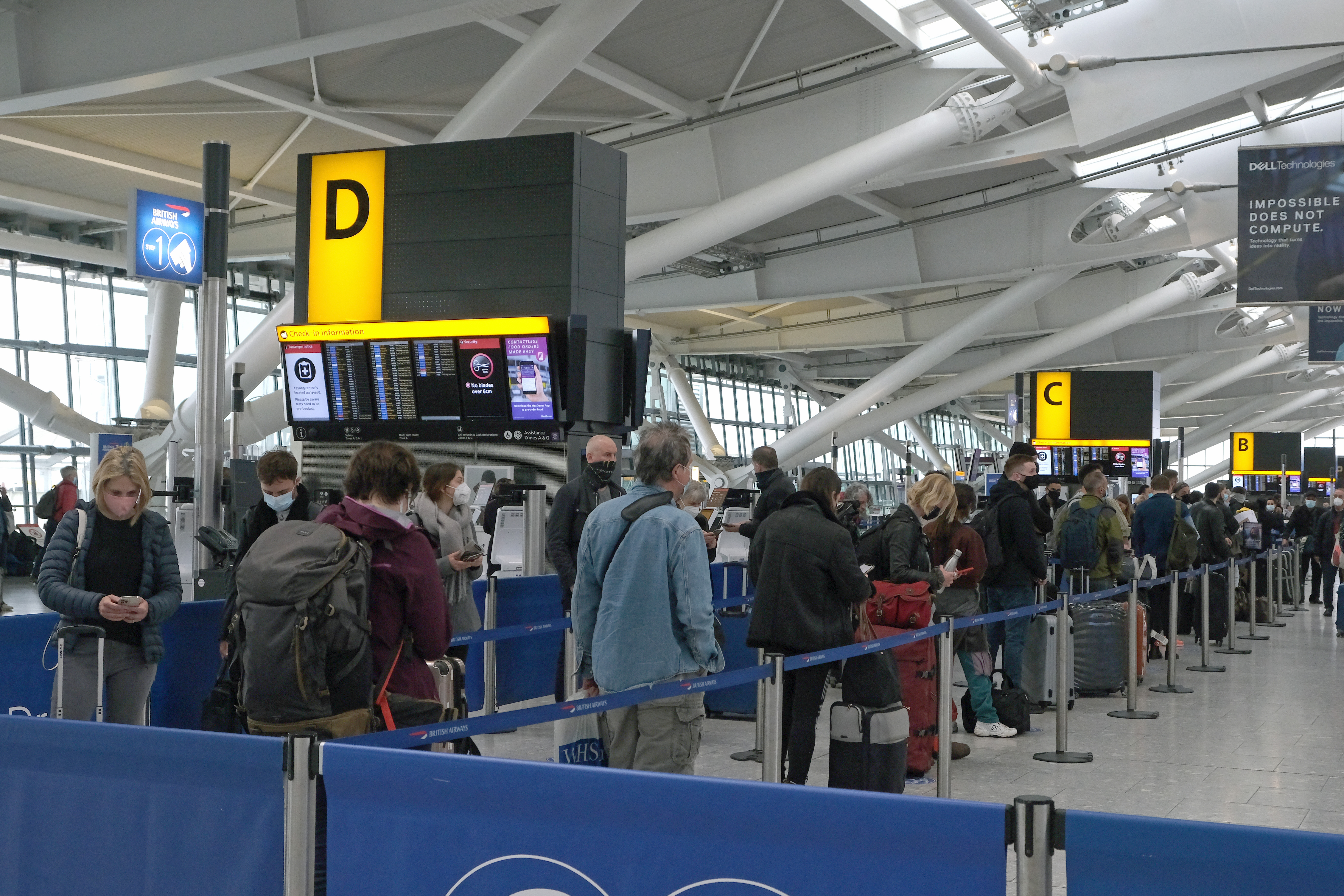 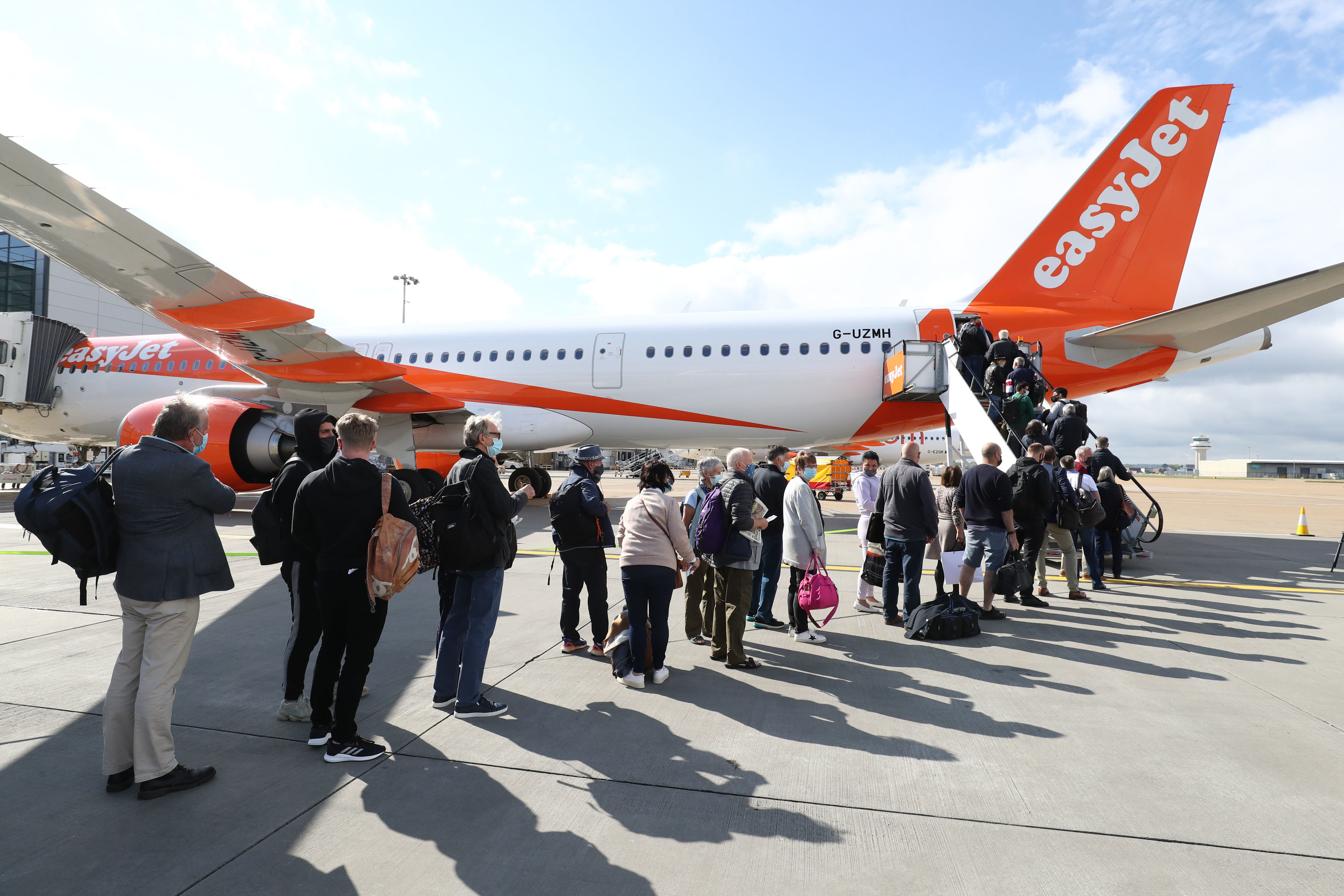 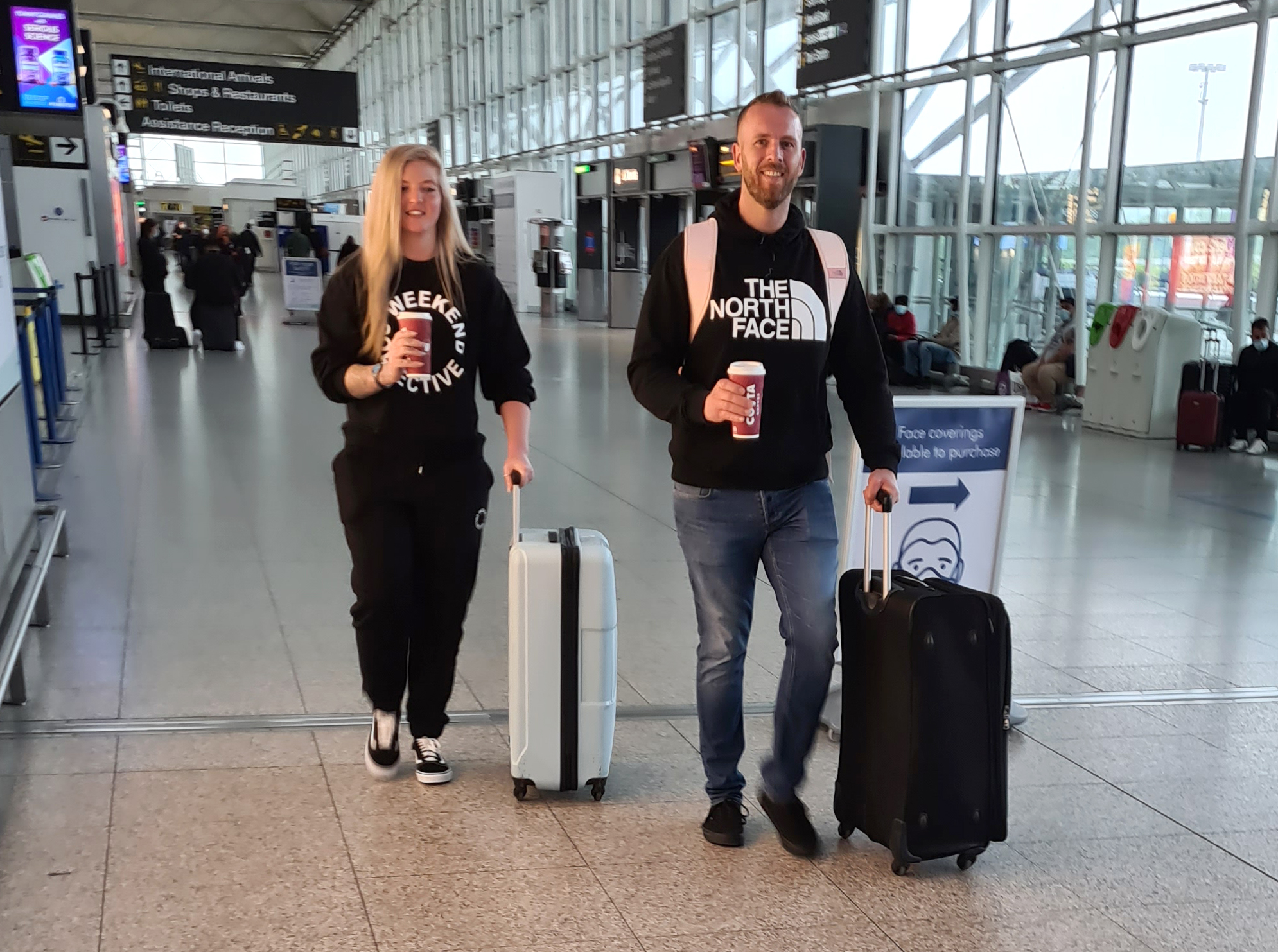 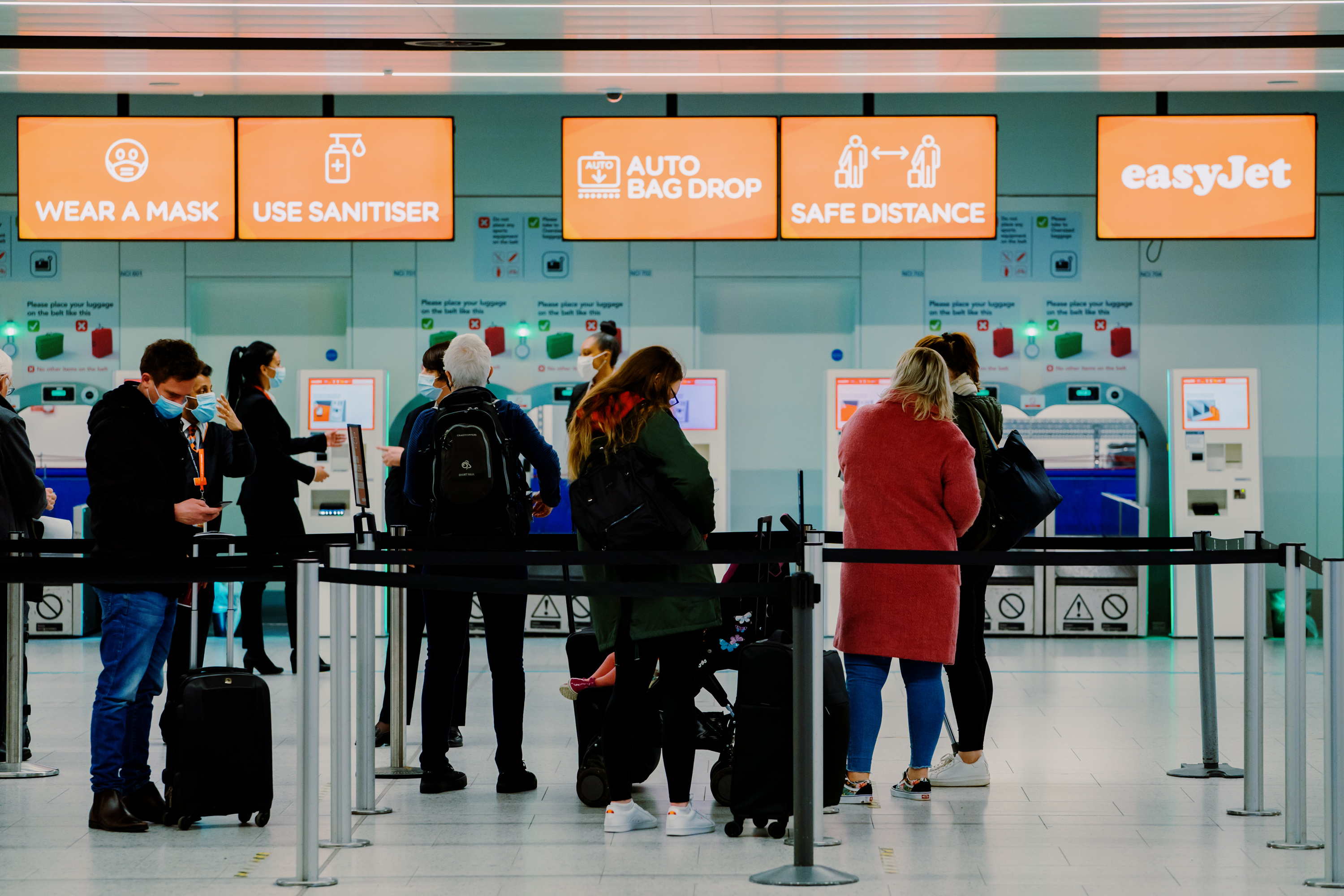 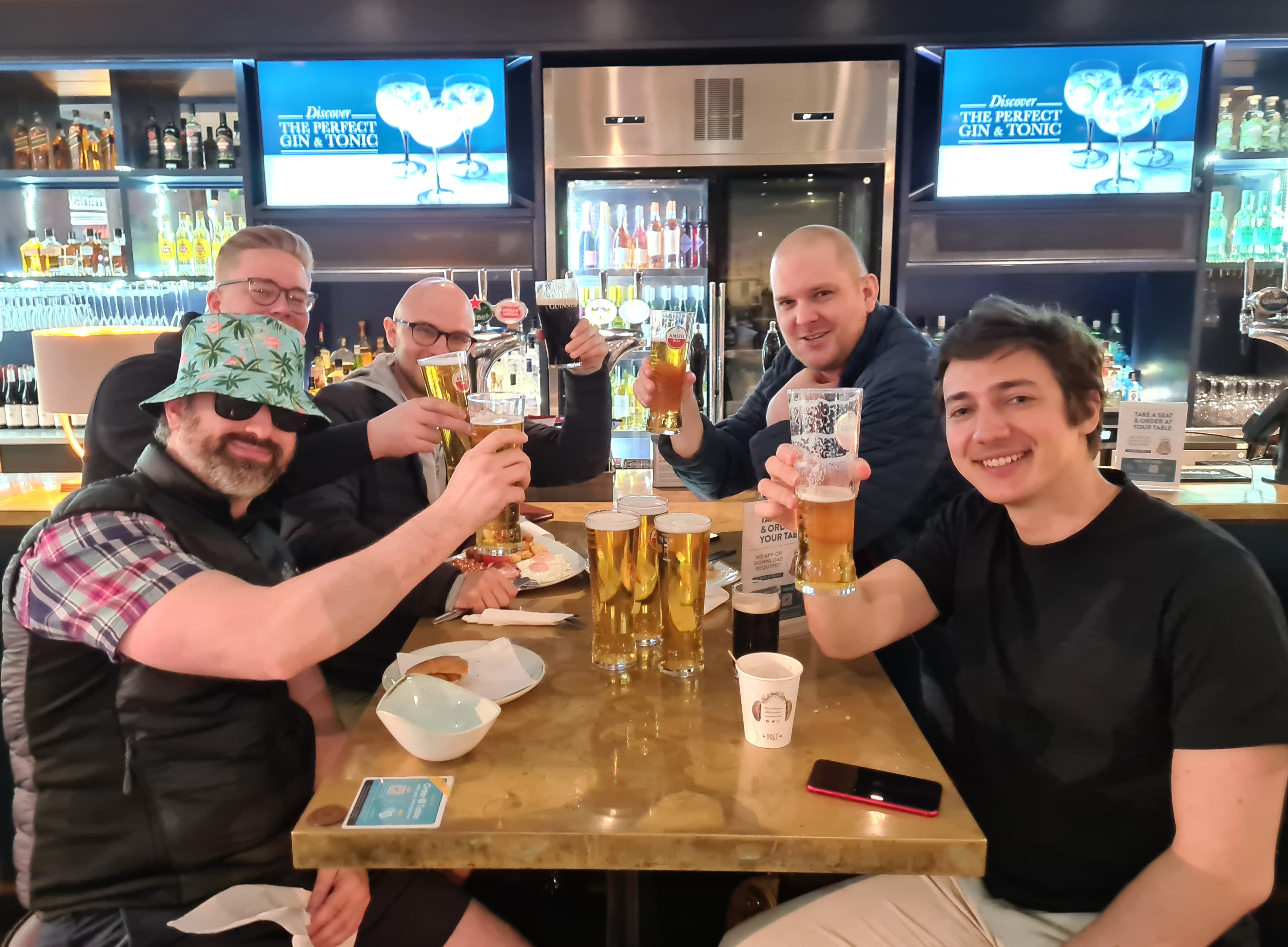 Also travelling to Portugal, couple Maurice and Sue, aged 55 and 53, said completing "the paperwork" was not difficult.

Asked if they had any health concerns about heading abroad, Sue said she was "trying not to think about it" but added: "The are checking our paperwork and we have to assume they do that for everybody and it's relatively low risk."

Despite fears of long queues, and large crowds already forming, Royal Mail postman Gary Underdown, 33, has said he was "shocked" at how quickly he and his family got through airport security on the morning of their flight to Faro in Portugal.

Travelling from Gatwick Airport with his partner Georgina Raven and their young son, he said: "We got here really early expecting the six-hour queues, and we walked straight to the front, straight through and sat there for three-and-a-half hours waiting."

He added: "We can't wait to get there, we've been waiting a long time."

When asked what they plan to do in Faro, he said: "Not a lot. We're key workers, we work for Royal Mail, we've been working a lot and very hard for the last year so we just want a break.

"Sit at the pool, do nothing, walk up into the mountains, that's all we want to do."

Most of Europe, which includes Spain, Greece and France, remains on the UK's amber list which requires a 10-day quarantine at home.

The Health Secretary has already said that travelling to amber countries is not advised unless "absolutely necessary".

It is also unlikely that any countries will be added to the green list any time soon, the Prime Minister has said.

Brits will find out on June 14 if travel restrictions will be fully lifted from July 21, Matt Hancock has warned.