FORGET The End Of The Pier Show . . . the fun is just beginning. Our piers are preparing to open up again on April 12.

These historic landmarks are the beating heart of entertainment and family fun in many seaside resorts. Trisha Harbord discovers what treats we can expect. 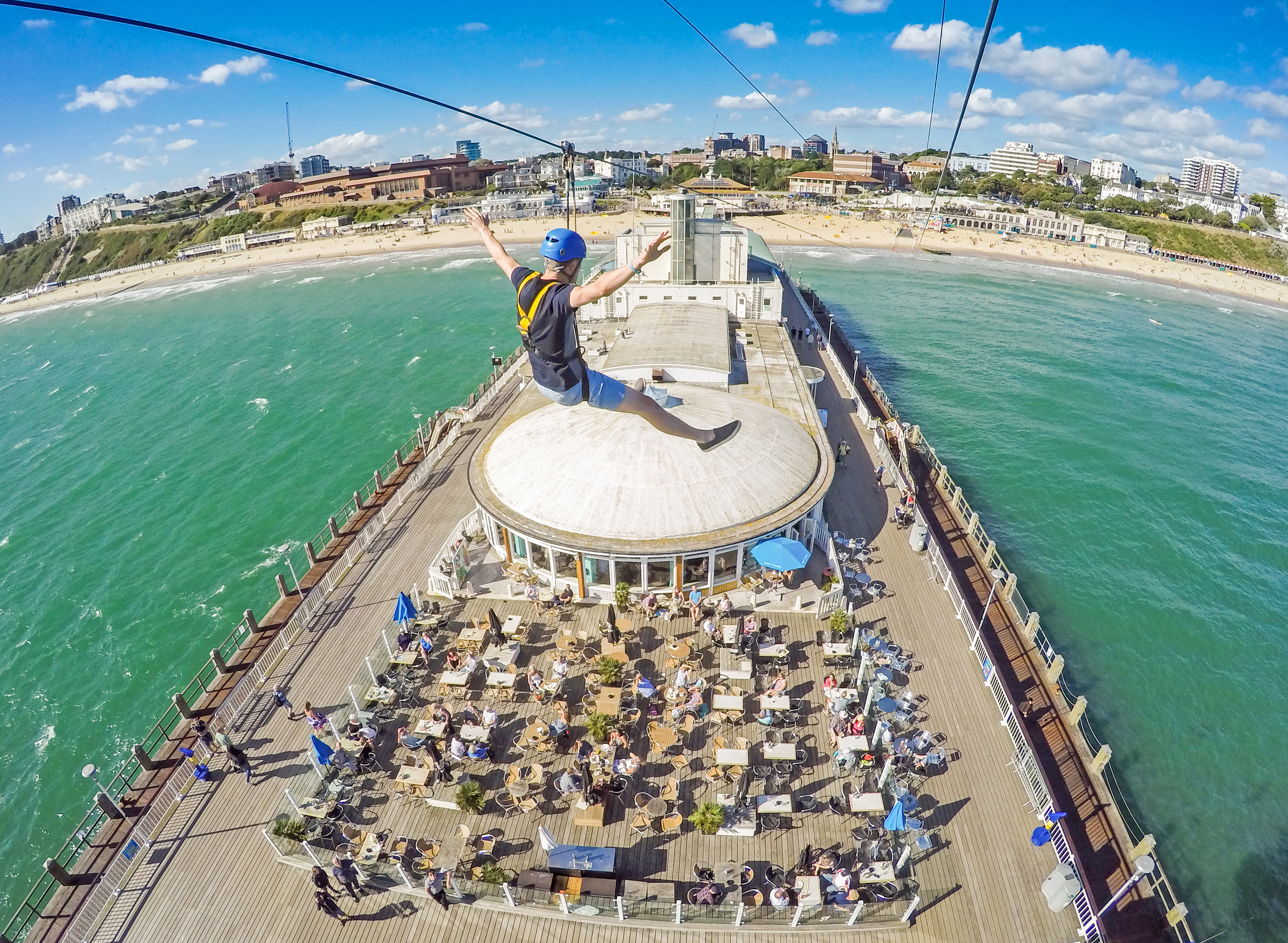 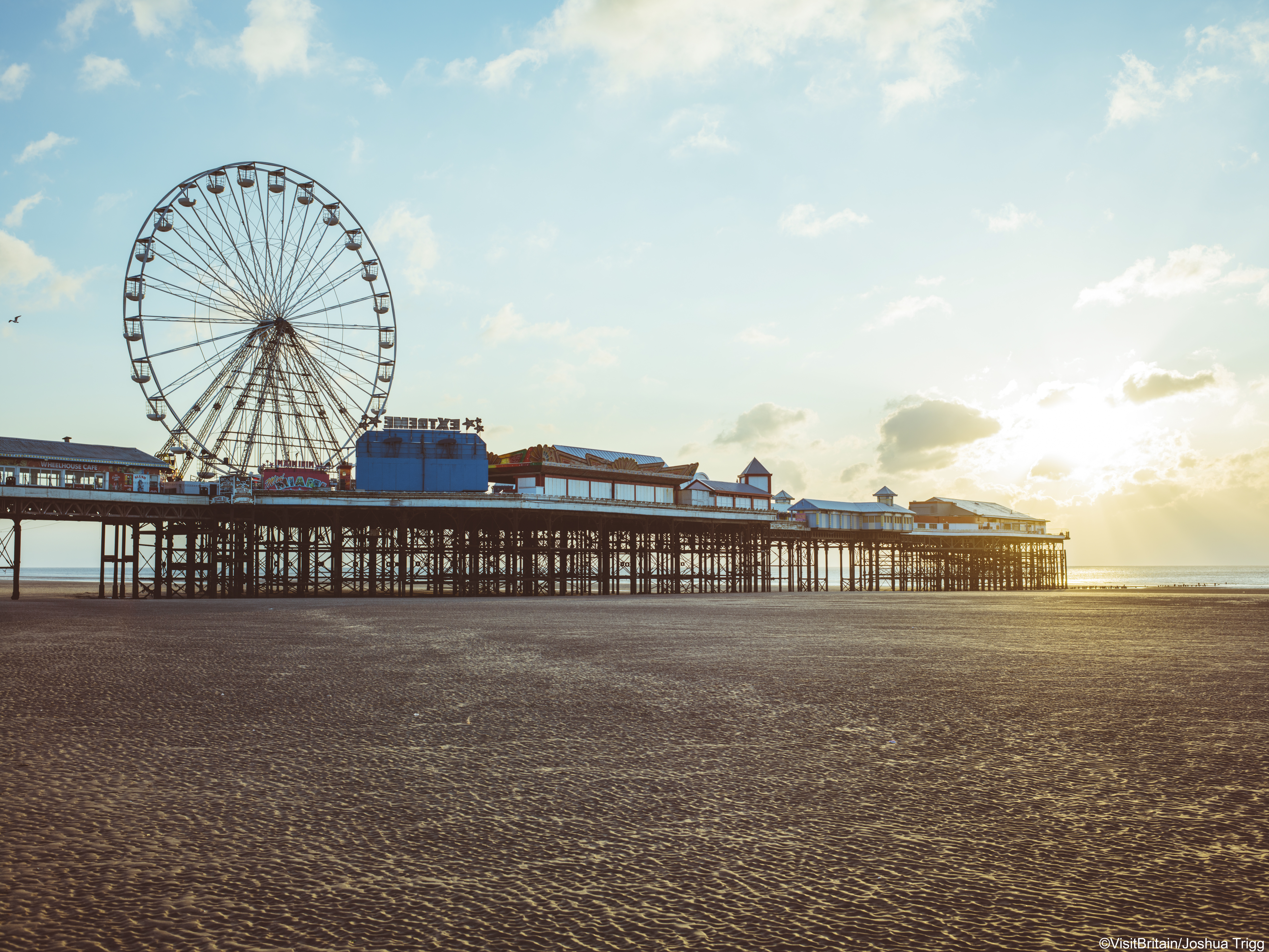 The Grade II-listed North is its longest and oldest. Hop on the carousel, listen to live music or watch sporting events in the Merrie England Bar or shows in the Joe Longthorne Theatre.

The 108ft Big Wheel is the Central Pier’s showpiece, giving superb views of the Lancashire resort.

It’s part of Sedgwick’s funfair including waltzers, dodgems and an amusement arcade. South Pier is even racier thanks to the Adrenalin Zone featuring Extreme rides such as Skyscreamer, where you are catapulted into the air at 100mph. 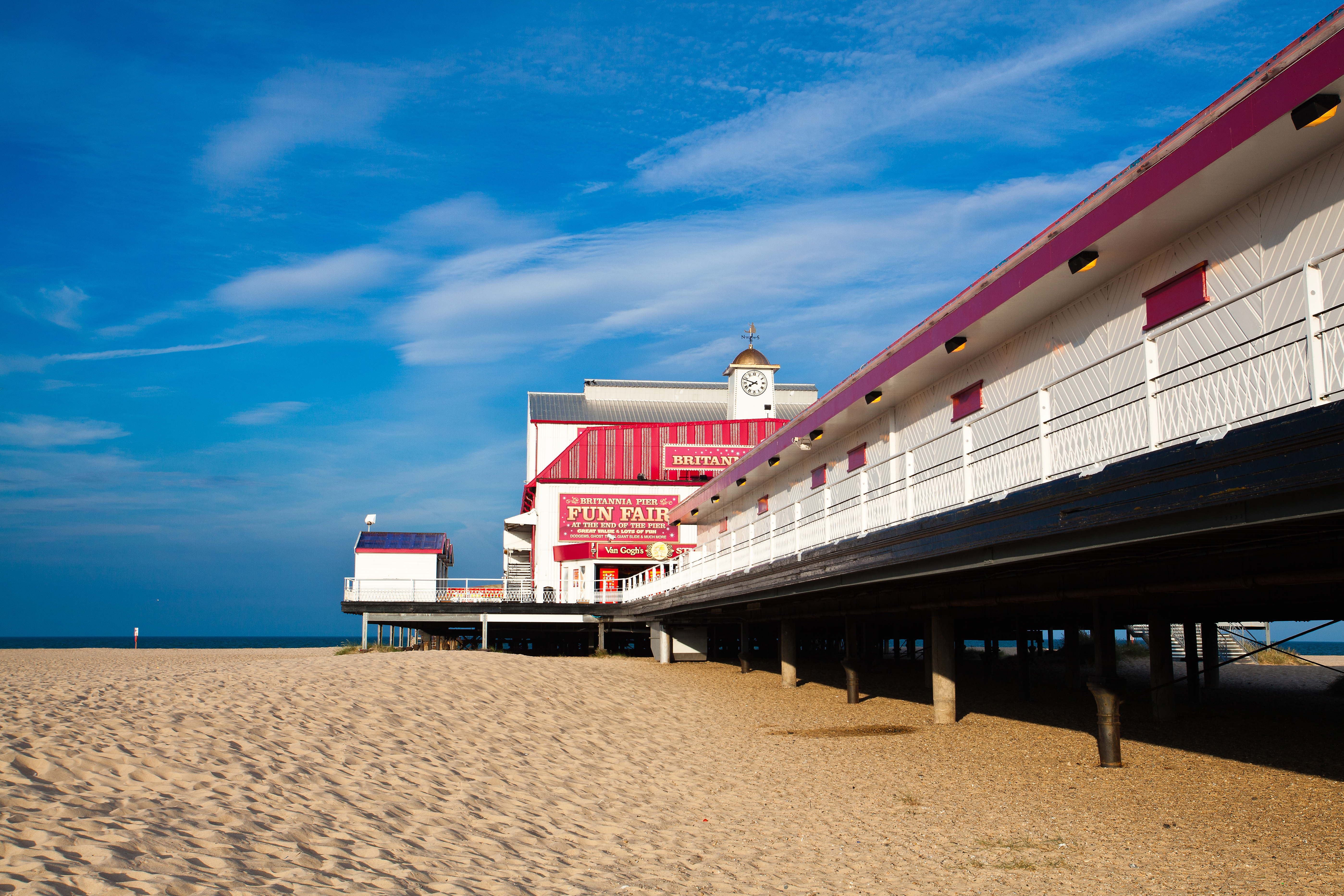 WE’RE all looking for a laugh this summer and Great Yarmouth’s Britannia Pier is one big comedy fest.

TV comics Jimmy Carr, Sarah Millican and Jim Davidson are all appearing at the theatre, along with musical acts.

It’s the pier’s fourth theatre, the others were destroyed by fire, as was the original 1858 wooden pier. The present land-mark opened in 1901.

Britannia rules the entertainment waves with a funfair including dodgems, carousel and a ghost train.

Refuel at the Sea Chef restaurant or burger bar and there’s no shortage of ice-cream, doughnuts and sweets.

The Norfolk resort has 15 miles of safe beaches and its promenade, The Golden Mile, is packed with attractions – the Sea Life aquarium, award-winning Merrivale Model Village and the Pleasure Beach theme park. 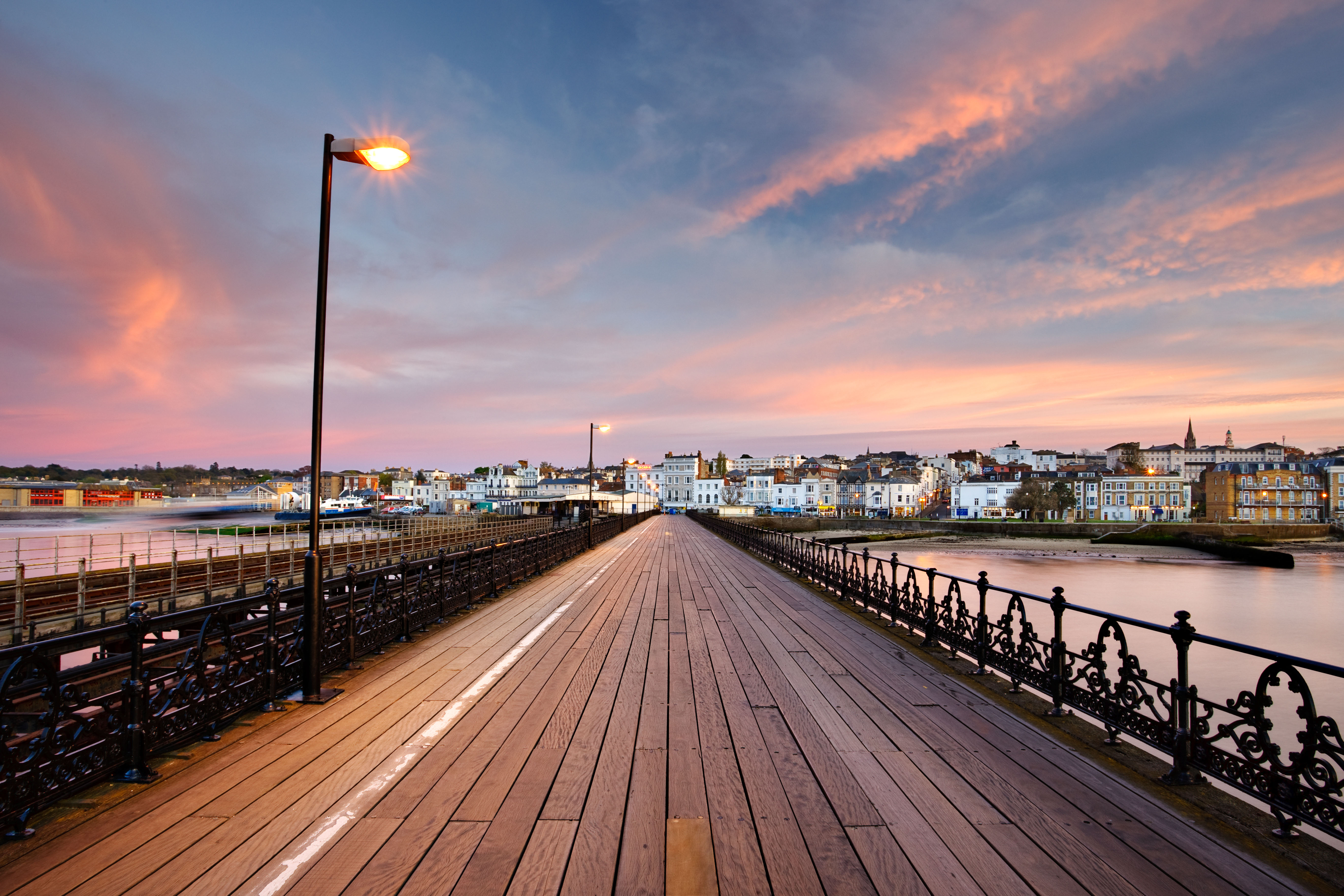 NEVER mind funfairs and shows, the Isle of Wight’s traditional Ryde Pier will always have its place in British history – as it’s the world’s oldest.

The wooden structure – now nearly half a mile long after a couple of extensions – sparked the building of pleasure piers across the UK.

It is also unique because you can drive along the walkway to the pier head, where ferries run a service across the Solent to Portsmouth. There is a railway track on the pier, too, from where you can get a train to the resort of Shanklin eight miles away. Talking of trains, you can also explore the beautiful ­countryside on the steam railway at nearby Havenstreet.

Ryde’s award-winning beaches are superb for bird-watching, or go east of the pier to find amusements, cafes, the harbour and other attractions include karting, ten-pin bowling and a tree-climbing centre. 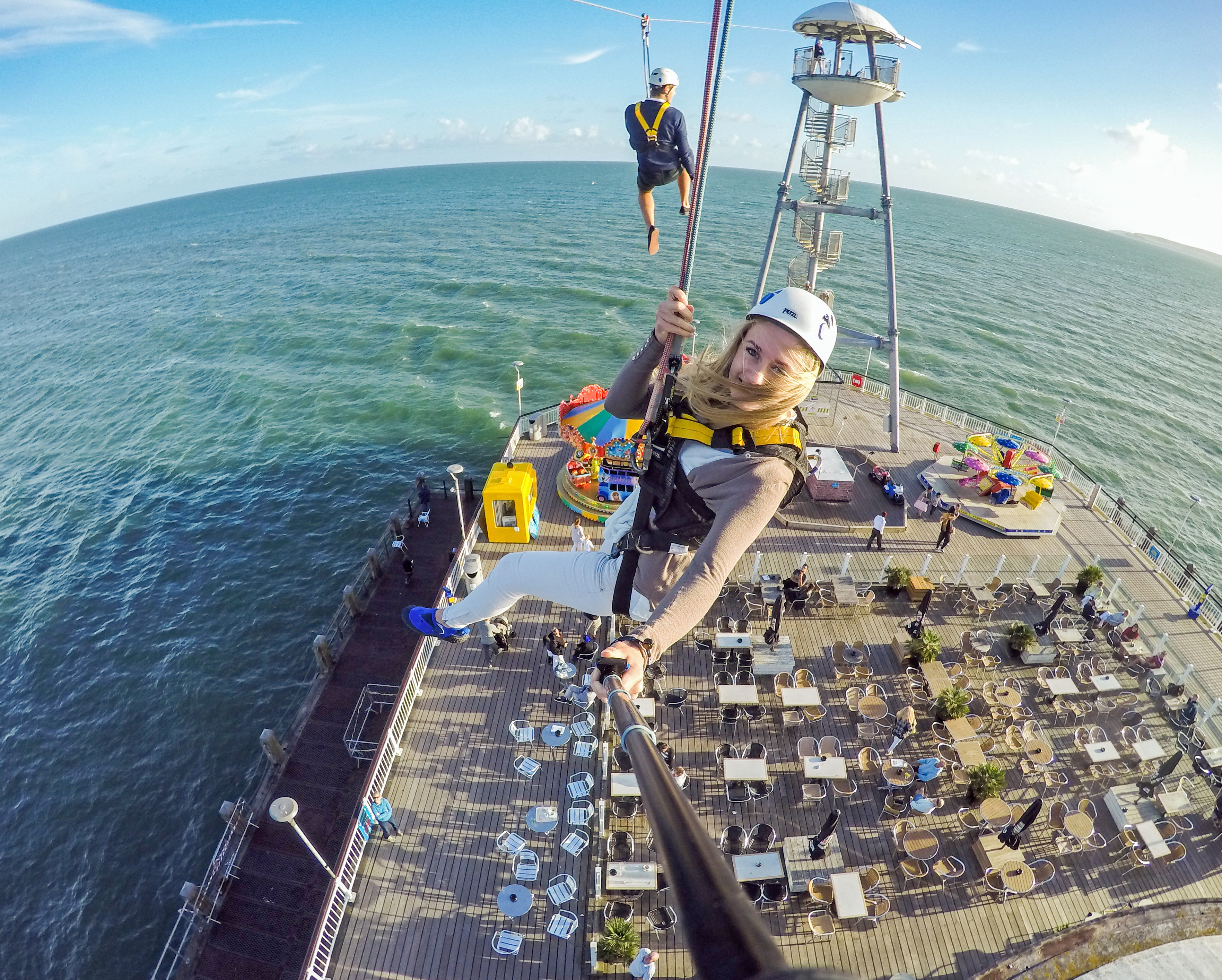 TAKE a leisurely walk . . . or get the adrenaline going with the world’s first pier-to-shore zipwire.

Thrill-seekers are launched from a platform 82ft over the sea, zooming 820ft to the beach.

The Key West Bar & Grill has stunning views and a huge menu, on which the scrummy fresh-fish platters are a­ ­highlight. It will be back in business for al fresco dining on April 12.

It is a great place to watch the sun set – and to take in the Red Arrows’ display on September 4.

Bournemouth has seven miles of sands – recently voted among Europe’s ten best by TripAdvisor – with colourful beach huts dotted along the lovely Dorset coastline. The beaches are ideal for watersports such as kayaking, windsurfing and scuba diving. 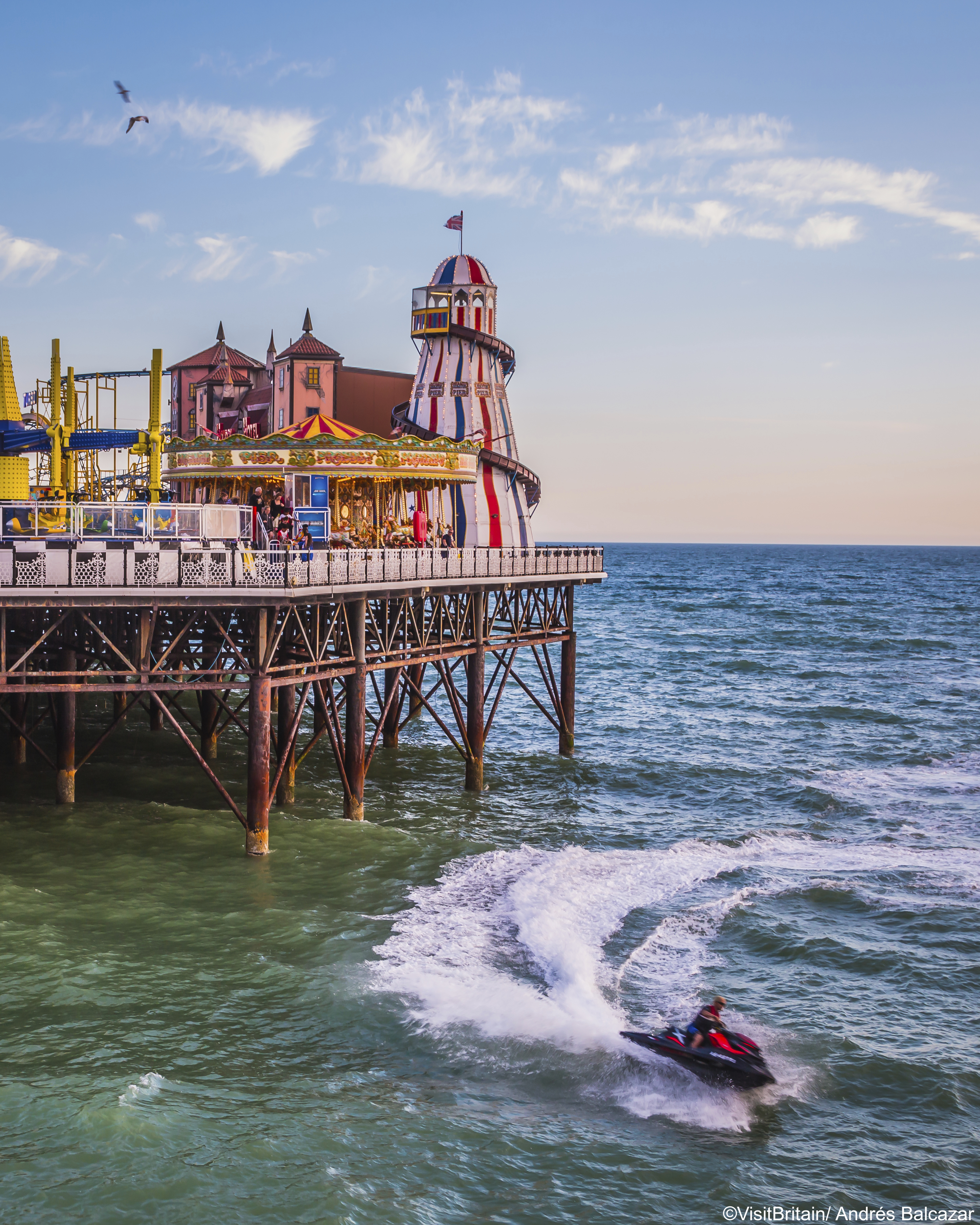 BUILT for £27,000 (more than £2million today), Brighton Palace Pier has seen a huge transformation. It used to have just a palm reader and a few punch ball machines to amuse crowds – now there’s a giant funfair.

Millions of pounds have been spent turning one of the finest ever piers into a superb entertainment centre for holidaymakers.

Your bones will be shaken by the loops and dives on Air Race and stirred by The Booster, where you will be turned upside down and catapulted 130ft in the air.

Little ones will love the teacups, mega slides and bouncy castle, just three of the rides and attractions, along with games in the Palace Of Fun.

The glass-fronted Palm Court restaurant offers fantastic views across the Channel. Sit in a deckchair on the pier boards and watch a live show or concert.

Brighton is packed with attractions, including the majestic Royal Pavilion museum and art gallery, Sea Life aquarium and the 530ft British Airways i360 observation tower.

Oh, and you’ll see the burned-out remains of the Palace Pier’s old rival, the once grand West Pier. 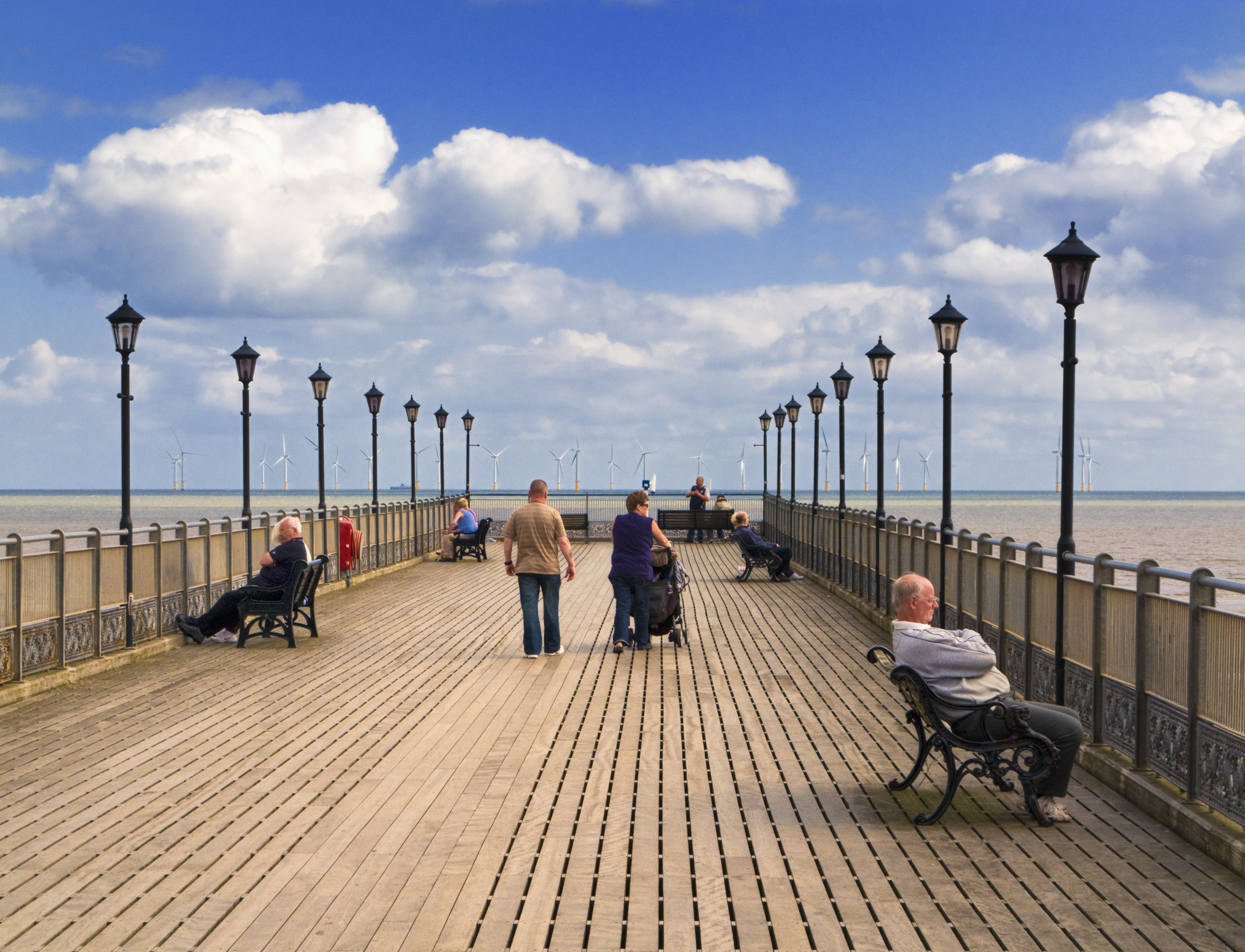 RECENTLY sold for £3million, Skegness Pier is to be restored to its “former glory” by its new owners.

The iron structure may even be extended – it was 1,844ft when it opened, but after being damaged by a storm and a fire, it ended up just 387ft.

Despite this, there is still a lot packed on to the Lincolnshire pier.

The pier entrance has become one of Europe’s largest amusement centres, with a ten-pin bowling centre, a fantastic Captain Kids’ Adventure World, with slides and ball pools, escape rooms, amusements and an adrenalin-rush Laser Quest where you can hunt down your family and friends.

On a clear day, you can see the towering wind farm in the North Sea and the Norfolk coast.

Chill out at the beach bar on the sands below the pier, or for more thrills, head to nearby theme park Fantasy Island. And don’t miss a visit to Natureland Seal Sanctuary, which does incredible work rescuing injured or orphaned animals from local beaches.

Or to escape the crowds, drive along the coast to the nature reserve at Gibraltar Point. 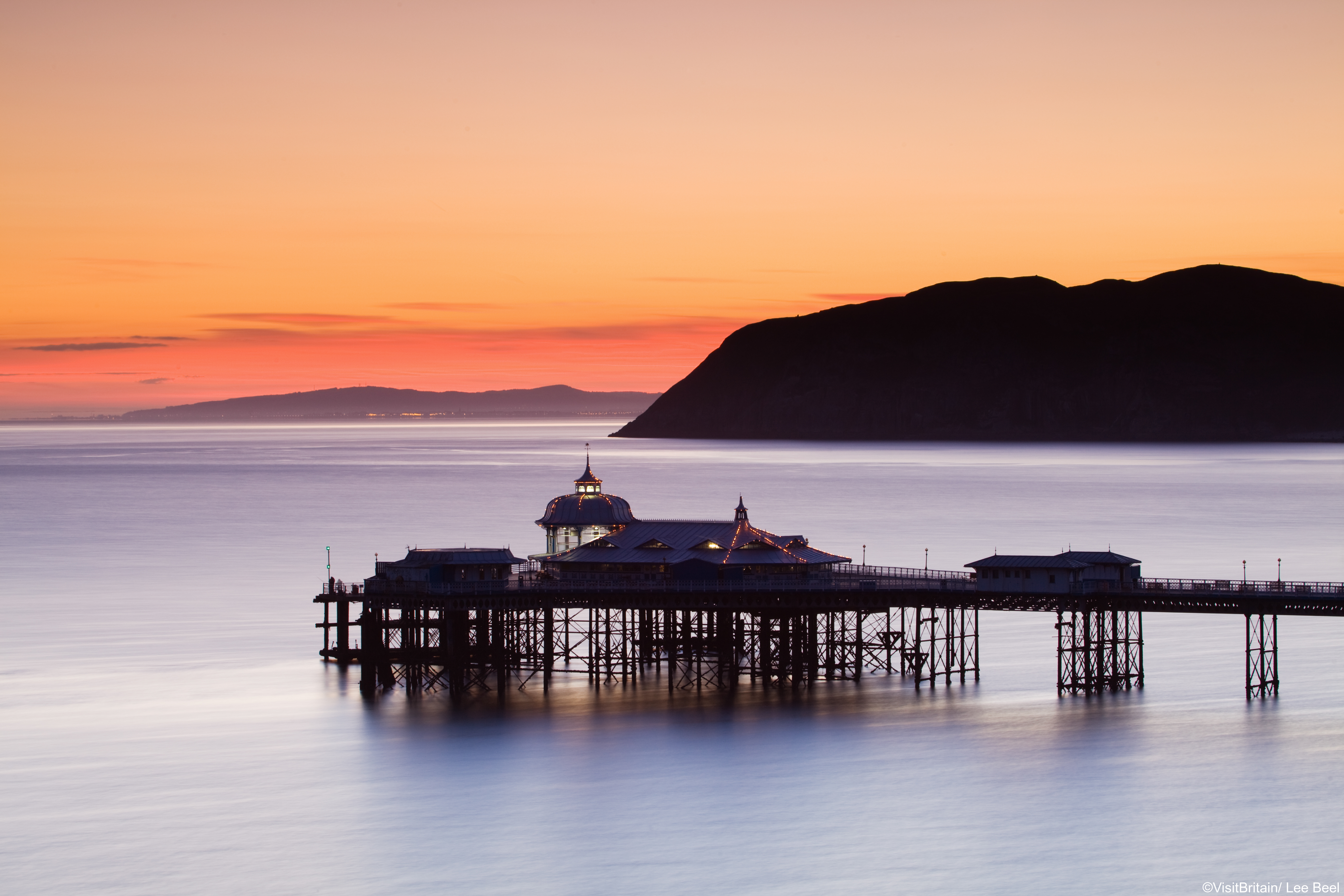 THE beautiful landscape wrapped around Llandudno Pier makes it one of the most appealing.

With its blue and white railings stretching out into the Irish Sea, the striking pier is the longest in Wales, set against the backdrop of promenade fringed by ­pastel Victorian houses.

Llandudno is an unspoilt resort and the pier reflects that, with traditional attractions such as a Punch & Judy show and stalls selling crafts and local produce including oysters, pies, cheese and beer – plus fish and chips, doughnuts and ice-cream.

An amusement arcade is the raciest this pier gets, but the town offers many more attractions.

Take the tram or cable car to the top of Great Orme Country Park, whizz down headland on a dry ski slope, take a boat trip or fishing tour, or visit the prehistoric copper mines, museum and art gallery.

See the white rabbit statue on the west shore – Alice Liddell, who inspired Lewis Carroll’s beloved character, had childhood holidays in this picturesque part of the world.

STROLL along Southend Pier and dive into the cafe for a refreshing drink. You will have earned it after walking more than a mile over the Thames ­Estuary along the world’s longest pleasure pier.

A great idea to save your legs is to walk one way and take the train back for £5, or take it both ways for £5.50. The cafe, boasts a great choice of food and is part of the super modern Royal Pavilion, a venue for concerts and exhibitions. Artists regularly make an appearance while you are eating. 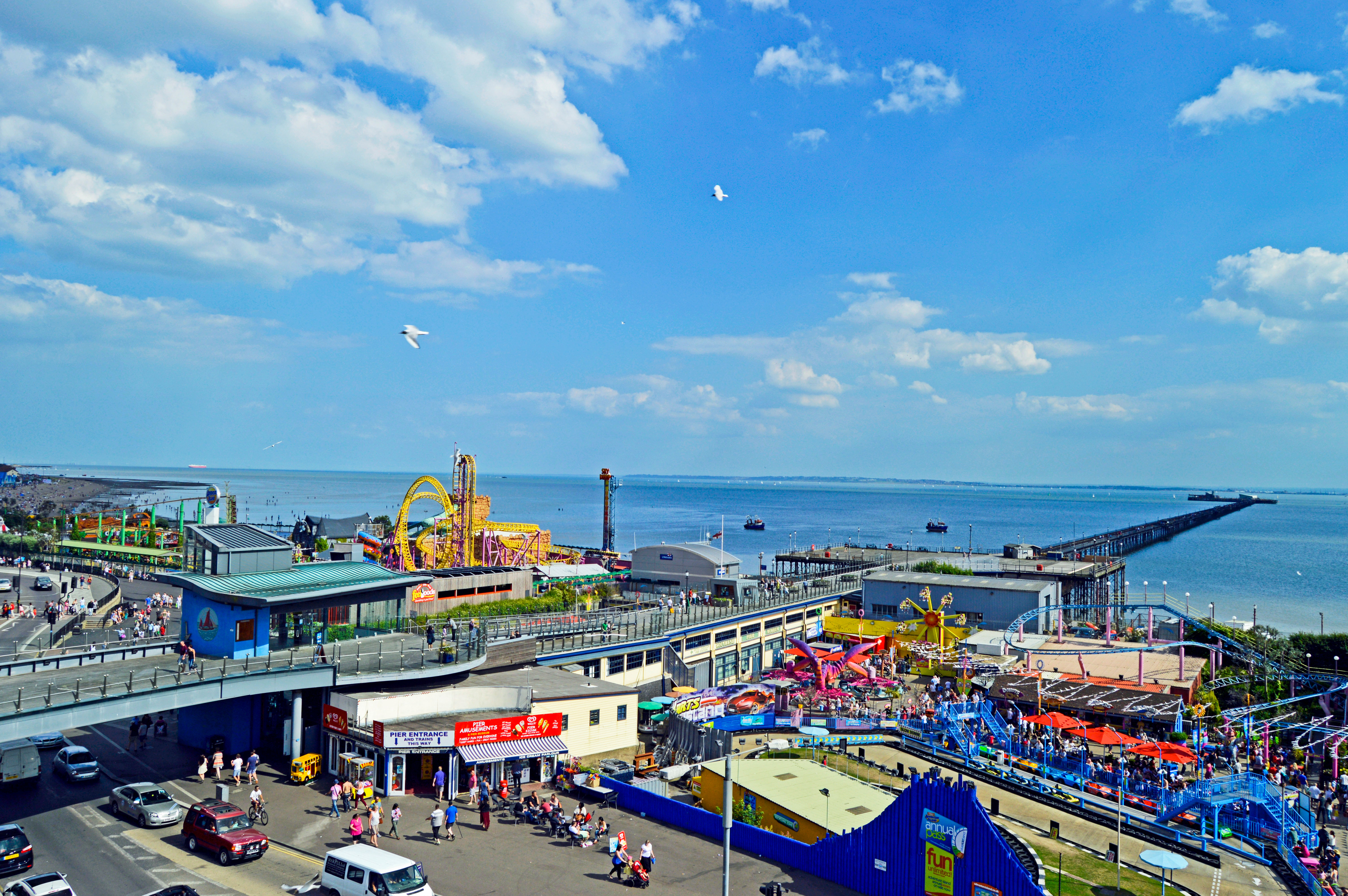 Play crazy golf or giant chess on the pier and. because it is in the heart of ­Foreshore Nature Reserve, you can spot wildlife including seals, porpoise and even dolphins.

Fancy fishing? Get a day pass and throw your line off the pier to catch mackerel, plaice or flounder.

Visit the museum at the pier entrance to learn about the landmark’s history and pick up souvenirs from one of the colourful beach huts on the Pier Head.

Nearby Adventure Island has more than 40 family rides and attractions.