Memorial Day kicked off the unofficial start of summer travel more than a year after the pandemic had Americans waiting on standby.

More than 1.65 million people were screened at airports across the United States on Sunday, according to the Transportation Security Administration. That’s an increase of 368% compared with 2020 figures when 352,947 people traveled through airports. 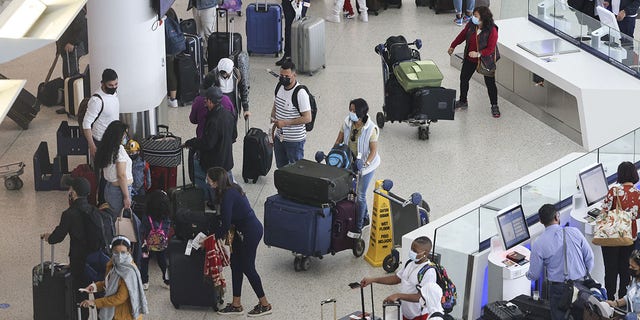 More than 1.65 million people were screened at airports across the United States on Sunday. (Angus Mordant/Bloomberg via Getty Images)

TSA figures show there was a 499% increase in travelers at U.S. airports on Friday alone with 1.95 million traveling compared with numbers from last year on the same day when just 327,133 took flight. And there was a 497% increase on Saturday when around 1.6 million people traveled compared with 268,867 in 2020.

And more than 37 million Americans were estimated to have traveled 50 miles or more from home between May 27 and May 31, according to the American Automobile Association. That’s a 60% increase from last year when travel was halted during the pandemic.

As more travelers hit the road as the weather gets warmer, demand for gasoline, meanwhile, has also seen a major surge with demand increasing nearly 7% on Sunday compared with a week ago, and demand surged 9.6 percent above the average of the previous four Sundays, according to GasBuddy analyst Patrick De Haan.

Gas prices jumped more than $3 per gallon for the first time in seven years ahead of Memorial Day Weekend.