“There is tragedy in my story, but my story is not a tragedy.” That was the powerful way that CNN anchor Zain E. Asher started our conversation about her debut book, “Where the Children Take Us: How One Family Achieved the Unimaginable.”

The book tells the story of Asher’s mother, Obiajulu Ejiofor, a Nigerian immigrant living in London. Ejiofor raised Asher and her three siblings alone after her husband died in a car accident. Asher was only five years old at the time of her father’s death.

In her memoir, she pays tribute to her mother’s strength in the wake of a terrible loss. She was determined to raise her children to be strong—and successful.

As the anchor of CNN International’s “One World,” Asher’s face is well-known around the world. So is her brother’s, actor Chiwetel Ejiofor, who starred in the Academy Award-winning film “12 Years a Slave.” Their sister, Kandibe, a medical doctor, and brother, Obinze, an entrepreneur, are also respected in their fields.

“I’m so proud of the way she raised us and the obstacles that she overcame,” Asher says of her mother to ESSENCE. “Thanks to her, we have surpassed every expectation. It’s despite the grief, despite the pain, she overcame. So the message [of] the book, even though this a lot of sadness, is a hopeful one.

Asher was inspired to write “Where The Children Take Us…” after sharing a part of her family’s story during a 2015 TED Talk. It was called “Trusting Your Struggle.”

In a press release, publisher Harper Collins says, “Where the Children Take Us…” is an “unforgettable portrait of strength, tenacity, love, and perseverance embodied in one towering woman”.

We say it’s a moving tribute to Asher’s mother and Nigerian culture.

ESSENCE recently sat down with Asher to learn more about the book and her family’s story.

ESSENCE: Your story begins with the tragedy that befell your family when you were just a little girl. Tell us about those circumstances and what compelled you to write a memoir which centers your mom’s story?

Zain E. Asher: When I was writing the proposal, I was 36 and so that was like, almost two years ago.  I was literally the same age that my mother was when she got that horrific phone call. I remember I was in the living room when we got the call.  The  voice on the other end of the line just said, ‘Your husband and your son had been involved in a car crash, one of them is dead, and we don’t know which one.’

When you’re a child, you see 36 [as] really old. When you reach that milestone, it’s so young. I cannot even imagine being that young. Not just being a single mother, but being a widowed single mother and an immigrant. The immigrant aspect of it is relevant, because being a single mother is difficult, no matter the circumstances. However, when you’re an immigrant, there usually isn’t the network of extended family to lean on. You can’t really say, ‘Well, you know what, this week has been really difficult for me. I’m going to call up my mom who lives in the next town and invite her over.’ That just doesn’t happen when you are a recent immigrant. She was literally by herself having to raise four kids.

ESSENCE: How did seeing your mother’s determination to give you and your siblings the best shape you into the person that you are today?

Zain E. Asher: My mother is the personification of resilience. I would say that the most important thing she did for me is that she would cut out articles of Black success stories. She would plaster them to our walls. They were in our hallways or in my bedroom.That had a profound impact on me because it changed my belief in myself.

When you are growing up as a Black girl in England in the 1990s, when people obviously are not as woke back then, you can internalize some of the negativity and unfortunately, some of the racism that surrounds you. By plastering our walls with Black success and seeing it over and over, she convinced us that the people in the articles were just like us. And if we worked hard if we applied ourselves, if we gave everything we had, then we could achieve exactly what they had achieved. That was so powerful for me.

The second thing that she did for me that again, changed my belief in myself, [was asking] my teachers for my school syllabus. Whatever we were going to be learning in school, she would teach it to us at home beforehand. By the time we learned in school, we knew it inside out. That meant that the teachers began to treat me as a role model for other kids. There’s so many other examples that I talk about in the book, but changing the tape that played in my mind, that’s what she did.

“[S]he fought to give her children a better life when all odds were stacked against her.” 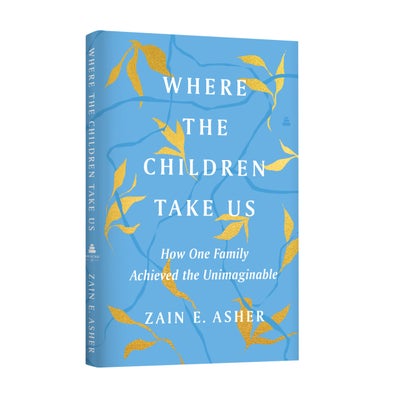 ESSENCE:  In the book, you describe your mother’s Nigerian parenting style.  Why was that such an integral part of the story and how do you hope it will resonate with others, especially people from immigrant backgrounds?

Zain E. Asher: My mom grew up and came of age during a civil war. I think that that is where her strength comes from. She was 15, maybe going on 16 during war in Nigeria called the Biafra War, where starvation was used as the weapon. People had to eat snakes to survive, termite and crickets.

My mom would sell cassava in the marketplace as a teenager. As she was selling her goods there would be machine gunfire raining down overhead.

Since she was the oldest child, it was her job to take care of her siblings and make sure that no one in our family died of starvation as so many other kids did.  She wasn’t even in school at all for two and a half years while the war was raging on.

When it came to being a single mother, the pain of losing my father in a car crash was unbearable. However, when it was time for her to roll up her sleeves, and when she felt as though her children’s future was teetering on the brink, she began to fight for us. That is probably the most remarkable part of my mother’s story is that despite experiencing the worst of circumstances through it—she became a fighter.

ESSENCE:  What does your family think of you telling your family’s story and sharing it with the world? What has been their feedback?

Zain E.Asher: Initially, my mom was like, ‘Why would you? Why are you writing a story about me? I’ve done nothing; I’ve done nothing special.’ When she says to me, ‘I’ve done nothing special,’ I’m like everything you did was special, Mom. I’m so thankful to her for that. I guess she never really sat and thought about what she’d achieved with her children. What she went through from a tragedy perspective and from a heartache perspective, was unimaginable. But she fought to give her children a better life when all odds were stacked against her.

ESSENCE: What do you hope that Black women in particular can take away from this story, whether they’re able to relate to several experiences in book one, or none at all?

Zain E. Asher: I would say the book is obviously my journey through the human experience. I would say that it also gives you a glimpse about what it’s like to live in Black skin. And [as] someone who lives in the UK, also as an African immigrant as well, which adds a different layer to it. I also would say that it’s really a celebration of the Black family.

It is sort of designed to debunk all the stereotypes of  Black people and what people can and can’t do. So it is a love letter to my mother, but [also] a real celebration of what Black people are capable of achieving.

Buy “Where the Children Take Us: How One Family Survived the Unimaginable” by Zain E. Asher here.