Workers entering Victoria from red zones such as Sydney are allowed to shop for food and medical supplies while serving 14 days’ quarantine under more lenient conditions than those granted to returning Victorians residents.

The construction sector is one of the industries whose employees are being granted “specified worker” permits by the Victorian government. 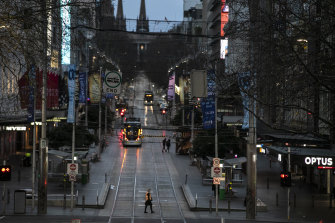 Under all permits, there is no obligation for workers to get tested before they enter the state – a condition experts say would add a crucial extra layer of protection against incursions of the virus.

Such a requirement may have helped prevent the five-day lockdown imposed on Victoria from Friday because the infections of two removalists from NSW, who entered the state on freight permits last week, could have been detected in advance.

Twelve new locally acquired cases were detected on Friday, including four cases revealed on Thursday. Two of the new cases are teachers from Bacchus Marsh Grammar, who will be included in Saturday’s figures.

Cases were also linked to Trinity Grammar in Kew, Deakin University’s Waurn Ponds campus, Ballarat Clarendon College and two Multiplex construction sites in the CBD but it is not known if they were new or existing cases.

The outbreak stood at 26 on Friday, with more than 150 exposure sites and 6500 people classified as close contacts.

“We never want to see more cases but I think it very much underscores the need to have a lockdown,” Premier Daniel Andrews said on Friday.

Three removalists from western Sydney worked at an apartment building in Maribyrnong last Thursday where they broke the rules of their freight worker permits and did not wear masks.

As police continue to investigate the removalists’ trip and alleged withholding of information from Victorian contact tracers, the government tightened the rules of freight permits on Friday. 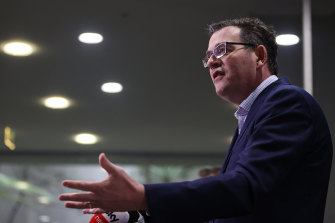 Removalists or delivery drivers who have been in a red zone — as Sydney currently is — in the past 14 days can no longer enter Victoria.

Yet, the rules for other workers who enter on permits remain more lenient than the conditions applied to Victorian residents who return home from red zones, close contacts of positive cases and visitors to tier 1 exposure sites.

Those three groups must self-isolate for 14 days at home and not leave for any reason, regardless of whether they test negative for COVID-19.

Conversely, The Age has obtained a “specified worker” permit, granted last week to a Victorian worker employed on a NSW infrastructure project who splits their time between Melbourne and Sydney.

It states that the worker must get tested within three days of arriving in Victoria and twice more within their 14 days’ quarantine.

Once they have tested negative for the first time, they can leave home for “medical care or medical supplies, takeaway food or drink, using a restroom” plus COVID-19 testing and emergencies.

A Health Department spokesperson said there are arrangements in place to allow border crossings for “workers carrying out jobs that keep Victoria’s economy going”.

“These permits come with strict obligations and if these are broken, significant penalties may apply.”

“I don’t understand why you would treat those workers differently to other red zone arrivals or close contacts,” she said. “You can get home delivery food and groceries so easily that it is odd they would be allowed to go out.”

Professor Bennett said the highly infectious Delta strain amplified the danger of any weaknesses in the quarantine system.

“It now looks like every small breach can lead to something much larger,” she said.

The conditions of specified worker permits have not led to an outbreak in Victoria. However, the danger of allowing visitors from red zones to go shopping was illustrated this week by a member of a family in Melbourne’s north who had previously tested negative but should still have been self-isolating because they had returned from Sydney.

The person instead broke their permit rules, visited Coles Craigieburn and ran into a friend who contracted the virus.

Separately, the cast and crew of the Moulin Rouge musical have been given last-minute border exemptions to leave Sydney for Melbourne. Almost 80 company members will undergo 14 days of hotel quarantine, though a small group have been given permission to visit the Regent Theatre for rehearsals.

Under the changes to freight permits, workers will also be required to test every three days and have a letter from an employer to confirm their eligibility.

Receiving a negative test before travelling from a red zone is not compulsory, however, unlike for passengers boarding international flights into the country.

Professor Bennett said pre-testing was not foolproof but added an extra layer of protection.

“If they test negative before then turn positive in Victoria, you have a more specific window for when someone was infectious,” she said.

Melbourne University epidemiologist Nancy Baxter, head of the Melbourne School of Population and Global Health, said it was not feasible to make permitted workers abide by the same rules as close contacts but that reinforced the need for testing.

“Testing obviously needs to be tightened up. Visitors should have a negative test close to the time of entering the state and then monitoring while they are here,” said Professor Baxter, adding that travelling workers should be prioritised for vaccination.

Mr Andrews said he “wouldn’t rule out [pre-testing] in future, we’ll just have to wait and see”. Asked why Victoria wouldn’t introduce it, he said there was “all sorts of things you could do”.

NSW recorded 97 cases on Friday including 46 people who moved around the community for at least part of their infectious period.

Premier Gladys Berejiklian warned numbers would probably rise again on Saturday and were “not where we would like them” three weeks into the Sydney lockdown. About three-quarters of the cases were in Sydney’s south-western suburbs.

In Victoria, two of Friday’s new cases were acquired at the Young and Jackson’s pub, where a COVID-positive man drank after his apartment complex was visited by the removalists. COVID-19 response commander Jeroen Weimar said the venue was “very busy” on Saturday before the Geelong versus Carlton match at the MCG.

“It’s a significant point of work for us, we have 207 primary close contacts identified … again, I’d urge everybody to go back to their memory banks, if you were there in that time window, please come forward now,” he said.

Victorian Industry Support Minister Martin Pakula announced a $201.8 million business support package on Friday with $3000 and $2000 payments to be automatically paid to operators who were eligible in last month’s lockdown. A Commonwealth-led income support payment of $600 or $375 for workers who have lost work hours is also available.

“This is not the time for the government to be pinching pennies,” he said.

Prime Minister Scott Morrison said work was under way on the details of the four-phase plan out of the pandemic announced by national cabinet a fortnight ago.

“Work continues to chart that way out and the vaccination rates we will need to achieve over the course of the rest of this year and next year,” he said. 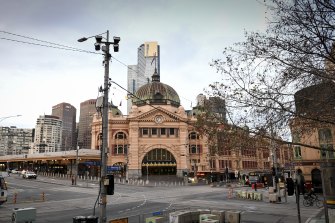 Mr Andrews said he believed police in NSW and South Australia as well as Victoria were investigating the removalists, whom Mr Weimar has repeatedly expressed frustration at for not being transparent with contact tracers.

The Premier said it was potentially an offence to lie to or obstruct contact tracers, and the removalists had been “flagrant” in their obfuscation.

A translator was used during interviews and the Premier indicated there were further barriers.

“Everyone is different, everyone has different circumstances. And some people are easier to get information out of than others,” he said.

“I won’t go any further than that for fear that people draw conclusions about an entire group within our community and I just don’t think that’d be fair.”

A Victoria Police spokeswoman said it would be inappropriate to comment further because the investigation was ongoing.

On Friday, Queensland declared Victoria a hotspot meaning anyone entering the state from Victoria after 1am on Saturday will be forced into 14-day hotel quarantine.

Victorians are also banned from entering the ACT, Tasmania, South Australia or the Northern Territory without an exemption.

And Western Australia has reinstated border restrictions for anyone travelling from the east-coast states.