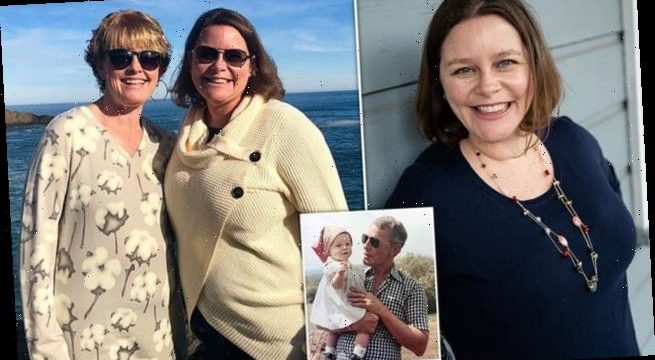 A woman who had no contact with her half-siblings for more than 30 years revealed how they reconnected after she spotted her photo while searching through newspaper articles online.

Michelle Glogovac, 39, who lives in San Jose, California, met half-siblings Annette, 56, and Steven Lalor, 51, as a toddler but lost contact after their father, Bob Lalor, divorced his ex-wife.

She saw her half-siblings once more in 1988, when their father was on his death bed, and began her search for them in the early 90s, hoping they could build a relationship.

It took until August 2010 for Michelle to finally track down Annette, who lives in Oregon, and she described laying eyes on her sister as like ‘looking in a mirror’.

Seven years later, after emails back and forth, the sisters finally met face to face. 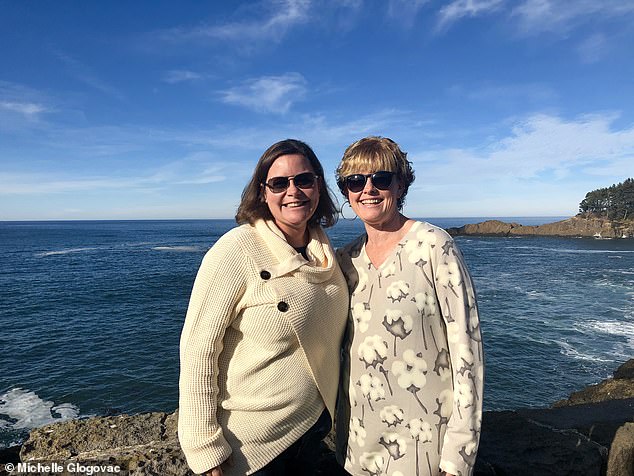 Michelle Glogovac, 39, who lives in San Jose, California, met half-siblings Annette, 56, and Steven Lalor, 51, as a toddler but lost contact after their father Bob Lalor, who had children with two women, left their mother for her mother. Pictured, the sisters together 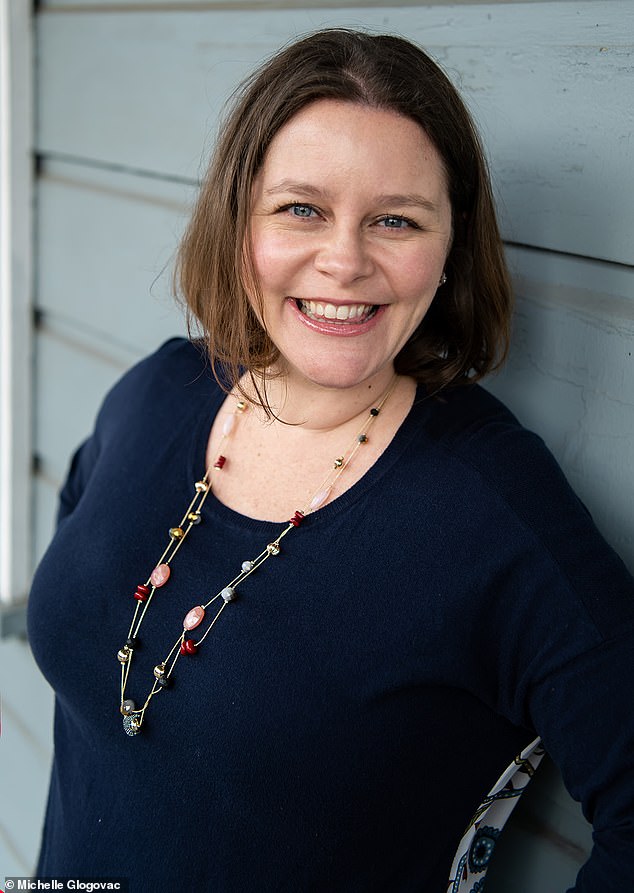 Michelle (pictured) said Annette visited her family home after the death of her father in 1988, however she didn’t have any interaction with her 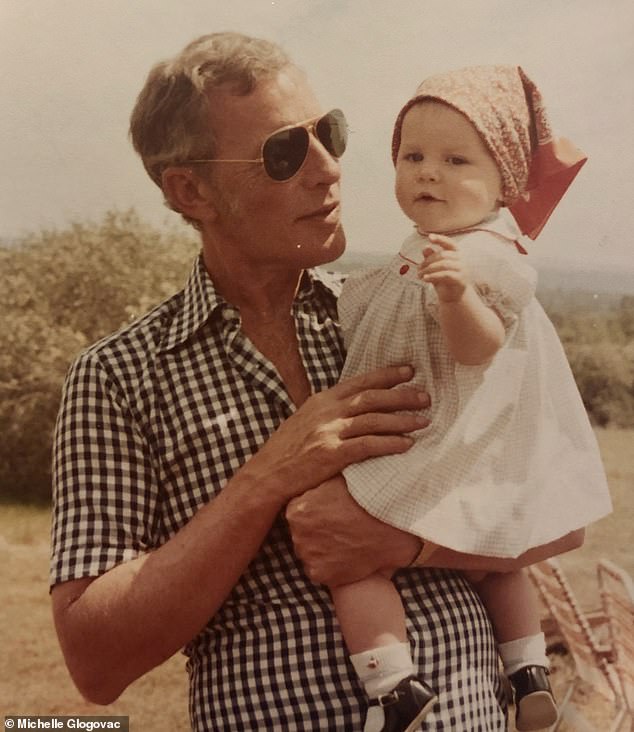 Michelle explained that her half-siblings stopped visiting when she was a toddler, after the birth of her brother Bob Lalor Jr. Pictured: Michelle as a child with her father

Michelle, a publicist, said: ‘I was nervous and excited at the same time because this was my sister after all, but she was also someone I hadn’t truly met before.

‘Our plan was to stay at her home for three days. We caught up, chatted over coffee, tea, food and we discovered our similarities were beyond what we could have ever imagined.

‘We both went to the University of California, Santa Barbara, both were law majors, we owned the same coffee maker, same soap dispensers, watched the same television shows, married men who are both of Lebanese descent, the number of coincidences and sameness was odd and yet so comforting at the same time.

‘We also discussed our pasts and were able to fit in the missing pieces for each other from the past 30+ years.’

Bob Lalor had been married to Annette and Steven’s mother for 13 years when he had an affair with Michelle’s mother, Yvonne Lalor-Kidder, 74, after meeting at work in Switzerland.

Michelle explained: ‘My dad worked in international finance for General Electric and was often relocated around the world, having lived in Japan for a while before being transferred to Switzerland.

‘My mother had been a flight attendant for KLM, Swiss Air and Lufthansa, but left the airline industry and became my dad’s secretary at General Electric.

‘They initially met in the office and it eventually became an office romance. It was only in the past two years that I learned that my dad was still married to his ex-wife when he met my mom.’

Bob divorced his first wife, the mother of his two eldest children, and remarried Yvonne in 1978. The pair settled in the US and went on to have Michelle and son Bob Jr, born in 1983. 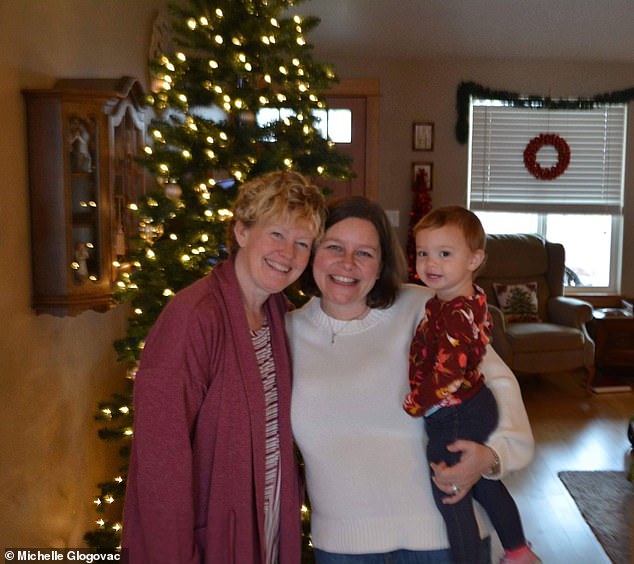 Michelle revealed the relationship with her mother has been strained since reconnecting with her sister. Pictured: Michelle and Annette with her child 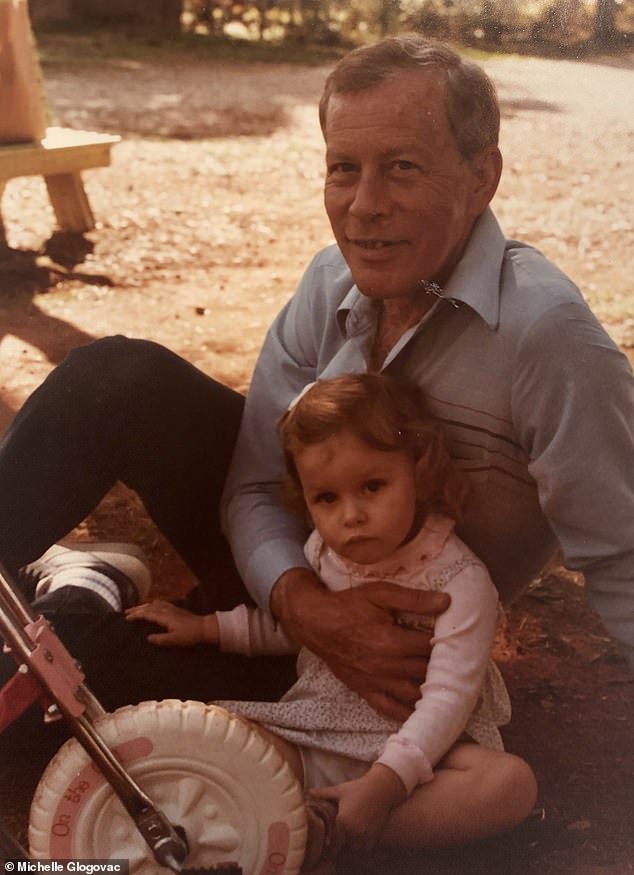 Michelle said she spent ages searching for her sister in the early days of the internet and the rest of her family didn’t help, despite at least one of her uncles having contact. Pictured: Michelle as a child with her father

Before Bob Jr was born, Bob Sr brought Yvonne and a toddler Michelle on a holiday to Bermuda with Annette and Steven.

‘My half-sister was 13 years old at the time and my half-brother was about eight years old,’ Michelle explained. ‘He introduced her [Yvonne] as his girlfriend and informed them that he was going to try to get an annulment from the Catholic Church to marry her.’

Michelle continued: ‘I recall my mom’s version of this story which included her being upset with my dad for spending too much time with his two kids while this was to be a vacation for her. She also mentioned finding an outfit she liked and mentioning it to my dad.

‘Apparently my half-sister spotted the same outfit and also liked it. She mentioned it to my dad as well, not in the presence of my mom, and ultimately my dad purchased it for my half-sister. This was the beginning of my dad not being able to navigate his way between being a dad and having a new relationship.’

Michelle doesn’t remember spending time with her half-siblings as a child because she was only a toddler when Bob stopped contact with his eldest children. The estrangement occurred shortly after the birth of Bob Jr. 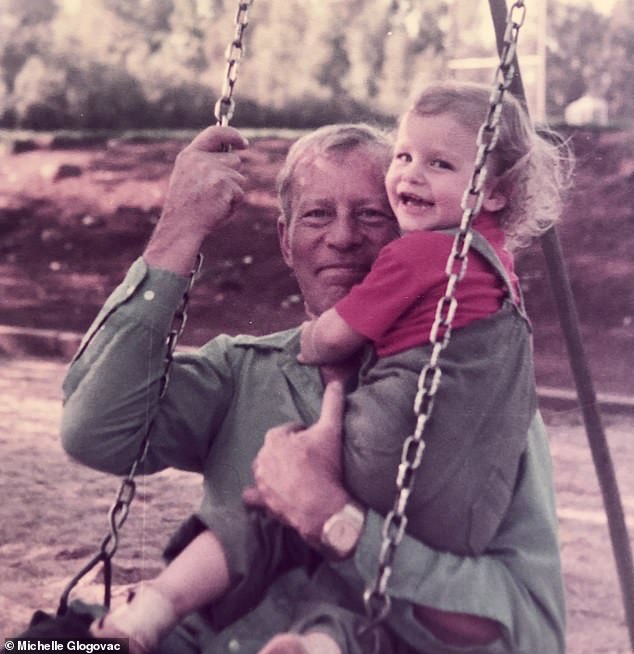 Michelle said she was able to reduce the location of her search after using Ancestry.com and then found mention of her sister in a news article. Pictured: Michelle as a child with her father

‘My father stopped paying child support to his ex-wife and my mother did not get along with my half-siblings, therefore I believe that is why the visits stopped happening,’ Michelle said.

‘My father never fought to see his children and my mother was of the mindset that we were his new family and therefore he didn’t need to have a relationship with his children from his first marriage.’

Bob and Yvonne gave their children a ‘happy and normal’ upbringing in Paradise, California.

Bob was diagnosed with cancer in the fall of 1988, just weeks after his own mother died of the disease. He died 12 days later.

Michelle said her father was ‘pretty unresponsive’ in his final days.

She continued: ‘During the 12 days from when my dad was diagnosed to his passing, he left the hospital and we had a hospital bed put in our living room for him to be comfortable. We had visits constantly from friends, family, the Catholic priest and more.’

Michelle’s most memorable visit came one afternoon after she came home from school to see two women smoking cigarettes in her front yard.

She said: ‘One was a younger woman with reddish hair that I knew right away was my sister. We exchanged looks, but I went inside my home, where my mom confirmed it was my half-sister and her mother and inside was my half-brother. I don’t recall us ever speaking and she left with her mom.’

Michelle began searching for her siblings in the early Nineties. At the time Annette didn’t have a social media presence, the internet was dial-up and Google didn’t yet exist.

She knew her sister Annette had used her mother’s maiden name before getting married and that she lived in San Francisco.

‘I knew I had a brother and sister out there and I wanted to know them as people,’ she said. ‘I also wanted to understand why they weren’t looking for me (and my younger brother).

‘It felt like there was a large part of my own story and life missing just by simply knowing I had relatives out there that I didn’t know. Having lost my father also played a role in my want to get to know them because they were a part of him and a connection to what I had lost when he passed away.’

Michelle said no one in her family would help her search for her siblings.

She spent hours searching the internet and signed up for Ancestry.com to gather more facts about her family as well as potential addresses to help expand her search.

‘Using the search results I got from Ancestry.com, I was able to change my search to different cities and that’s how I found the news article with my sister’s picture in it,’ Michelle explained.

‘It was on August 9, 2010 that I found this article that said my sister had just been promoted as a judge.

‘She had the same hairstyle that I remembered and her face was like looking in the mirror at myself. I felt all the emotions…joy and happiness to have found her, shock to have found her after all these years, worry that reaching out would result in nothing.’

Annette’s contact information wasn’t listed but Michelle was able to find an email address using her new place of work.

She continued: ‘I sent her [Annette] an email that day and told her I’d been looking for her for decades and that I was hoping to get to know her, have a relationship with her, but that I also understood that if she wasn’t open to a relationship, that was her choice.

‘It took about six weeks to receive a reply from her because she’d been out of the country on vacation. Her response was enthusiastic and yes, she wanted a relationship with me, whatever that might look like.

‘We started with just emails over the course of seven years. We’d update each other on our lives, share some bits of our past, but it was mostly about getting to know each other in the present. During these seven years, I got engaged and married.

‘I invited my sister to my wedding, but she declined. It wasn’t until meeting her that she told me she wanted very much to attend my wedding but was concerned over how my mother might react and didn’t want to ruin my day.’

The sisters finally met face to face in 2017 when Michelle and her children joined her husband on a business trip to Oregon, where Annette lives.

Michelle said her relationship with Annette now involves weekly emails and doing FitBit challenges together. They also enjoyed a weekend trip together on the coast of Oregon before the pandemic and hope to see each other again soon.

However, she revealed the relationship with the rest of her family hasn’t been as strong in recent years, saying: ‘My relationship with my mother has been strained since my wedding eight years ago. I decided that I would no longer tolerate the toxic behavior that was being pushed upon me as a child and even as an adult.

‘My mother was not happy about me having found my sister and talking to her when I told her. I’ve only recently started talking to my mother on occasion, but we do not talk about my sister.

‘My brother knows I’m in touch with our sister, but he has made no effort or shown an interest in meeting her. My relationship with my sister is separate from the relationships of my immediate family. It has brought me closer to my extended family though, including my dad’s last remaining sibling and his family.’

Despite the turmoil caused by her reunion, Michelle advises others to make an effort to reconnect with their loved ones.

She added: ‘Take the chance and reach out. It can be very daunting putting yourself out there like that, but if your loved one responds positively like my sister did, then it can and will be life changing for you and for your loved one.

‘There are always three sides to every story; yours, mine and the truth. No matter what you’ve been told is the reasoning behind why you might be out of touch with someone, give them the opportunity to share their side of the story so that you can get the whole picture, instead of just some pieces of the puzzle.’