It’s going down and TikTokers are yelling timber. Coachella’s rogue, unofficial little sister, the Revolve Festival, has been declared “Fyre Fest 2.0″, an unflattering nod to the infamous music festival that burned out in a blaze of drama in 2017.

Revolve attendees have flamed the fashion and music festival held over the past weekend, fuming about having to wait in line for hours in the Californian desert heat without water, just to be shuttled to the exclusive US$2000-a-head ($2700) event, with some claiming they didn’t even make it through the gates. 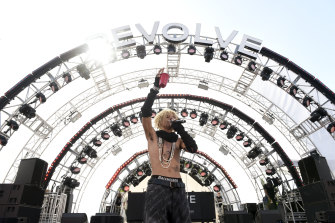 What exactly is Revolve Festival?
It’s an annual invite-only music, arts and shopping event, hosted by online retailer Revolve and held alongside the first weekend of Coachella. Attended by influencers, the festival is known for its social media displays, A-list musical acts and “free” clothes as part of the ticket price.

Ok, so what actually happened?
Picture a desert. Then imagine being stranded there for hours. Hosted at the Moroccan-themed Merv Griffin Estate in La Quinta, California, the only way to get to Revolve Festival was to wait for shuttle buses in a parking lot, more than two kilometres from the event.

“The logistics of getting to the festival were dangerous,” TikToker Averie Bishop said in a video. “There was pushing, shoving, shouting, yanking people in front of the buses, people standing in between the buses while they were moving.”

Photographer Madison Crowley, who attended as a guest, said other transport options were not feasible on the day. “You couldn’t Uber, there was barely any service…” she said. “Even if you got the address … they were not allowing anyone in, no extra Ubers, no walkers, you had to be on the shuttle to enter the festival grounds,” she said.

So, what’s the big deal?
The temperature reached 34 degrees in La Quinta over the two days, and attendees claimed they waited in the heat for hours without water.

They also criticised the security at the event, saying security checks were not adequate and that security personnel weren’t stopping people from cutting through lines.

“[Security] did not check my bag, they didn’t care if anything was going off,” said Kaelyn, another TikToker and influencer. “We ended up being told [we] should know how to form a line and that security didn’t need to do anything.”

Kaelyn waited for four and a half hours but was cut off from the last bus. “We waited for hours and hours in the hot sun to not even get on,” she said.

Revolve’s co-CEO, Michael Mente, said the guest list was about the same length as it was in past years. “For us, it was more about quality over quantity. We didn’t want to lose the intimacy of the event,” he said.

Is everyone torching the event?
Revolve Fest has been compared to the infamous 2017 Fyre Festival, hosted by convicted fraudster Billy McFarland. That event, held in the Bahamas, left attendees stranded with mattresses on rain-soaked floors and disappointing meals.

But not everyone is upset about Revolve, especially the big names.

Crowley said these “elite” people were lined up separately and that “they were escorted right onto the first bus”.

Aside from the transportation complications, Crowley said she loved the experience. “This is not a ‘bash Revolve’ video,” she said. “I had so much freaking fun… I had the time of my life on Sunday.”

Will the backlash amount to anything?

Critics of the event said it was disorganised and that Revolve needed to improve their safety processes.

Bishop, who waited in line for more than two hours and did not get into the event, echoed Kaelyn’s views on the inadequacy of the security at the event. “I really hope [Revolve] takes into consideration everyone’s safety and security next year,” she said.

Revolve did not immediately respond to a request for comment.