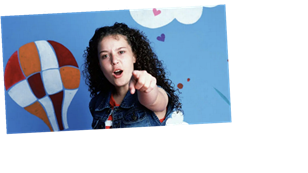 Dani Harmer rose to fame as popular character Tracy Beaker, and quickly became a household name as a result.

Tracy Beaker dominated screens in the early 2000s as we saw the life of Dani’s character play out and all the adventures she had along the way.

But where is Dani Harmer now? Let’s take a look…

Berkshire born Dani is the daughter of a children’s casting agent and a chauffeur.

Dani attended drama lessons from the age of seven and won a scholarship to Redroofs Theatre School.

Then, before her Tracy breakthrough, she popped up in a West End musical and played an extra in Harry Potter and the Philosopher's Stone.

Dani went on to have huge success in the role, and after Tracy Beaker she went on to star in the likes of Trial & Retribution, My Family, Pie in the Sky, The 10th Kingdom, Beast, Touch Me, and I'm Karen Taylor.

The actress, who is now 32 – where did the time go – released an album in 2008 after turning to a career in music, but its released was rumoured to have been pulled after poor sales.

In 2012, Dani went on to compete in Strictly Come Dancing and she reached the final.

The actress recently spoke about her time on the dance show, revealing she was trolled over her weight.

Dani,who previously shared her reaction to Stormzy's cover of the Tracy Beaker theme tune, opened up about the hateful messages she received while appearing on the BBC One show.

The 32 year old told Radio Times: "I got so many messages, people telling me that I'm fat, that I'm overweight and I was like a size six at the time..

"So I was like, 'Holy moly, if I'm fat, God knows what other people must be thinking if they're bigger than me', that must be just horrible.

"I can think of things really logically and be like, obviously, I'm not fat, that's ridiculous.

"This person, obviously, is just bored, or has something wrong with their life that they feel like this is the only way they can get some validation and I actually feel sorry for them," Dani shared.

The star welcomed her daughter with boyfriend Simon Brough, who she often shares adorable snaps with.

In a recent one, Dani penned: “I couldn’t love him any more,” while standing txt to her beau.

Simon’s bio states that he is a “gamer, amateur chef and pop culture referencer.”

Dani and Simon don’t shy away from sharing glimpses inside their home life, and adorable Avarie-Belle often pops up on their feeds.

Dani also runs her own academy now, named the Dani Harmer Academy, where she runs online classes, including drama, musical theatre and arts and crafts.

Dani is set to return to screens as the Jacqueline Wilson character in a brand new series – My Mum, Tracy Beaker.

The series will see Dani play the part of a mum to 10 year old daughter Jess, and it’ll follow Dani’s life as she begins a relationship with her childhood friend-turned-professional-footballer Sean.

Clearly excited about the role, Dani told Radio Times: “I just think I was like everyone else – I was just a bit of fan. I just really wanted to know what Tracy was up to, where she was going, what was happening with her.”