Publish and be damned, goes the old saying. But increasingly the damnation is coming from within industry offices, and is stopping some books from coming out at all.

According to Constance Grady in Vox magazine, the publishing industry in the US is facing an existential crisis. There’s a generational battle going on that challenges the most basic ideas and assumptions about why we publish books. 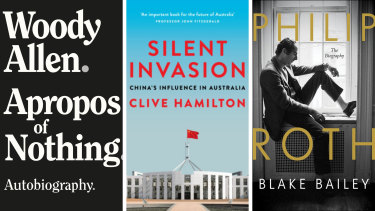 Three books with three highly publicised battles to get them published. Credit:

Grady lists several recent cases where books have either been dropped altogether or have had to find other publishers because of in-house protests from younger staff. This used to happen behind closed doors, but now it’s gone public.

The cases include high-profile titles such as Woody Allen’s memoir Apropos of Nothing, dropped by Hachette after a staff walk-out, and eventually picked up by a much smaller company, Skyhorse Publishing. W. W. Norton published Blake Bailey’s biography of Philip Roth, which was both acclaimed and criticised because it focused on Roth’s womanising reputation. But then the publishers took it out of print after two women accused Bailey of rape.

In those cases, the authors were under a cloud because of allegations about their personal lives. But the biggest blow-ups have occurred when far-right figures and Trumpian politicians have come under fire. 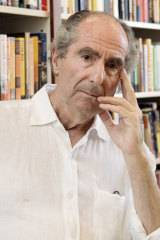 Blake Bailey’s biography of Philip Roth, pictured, was criticised because it focused on Roth’s womanising.Credit:AP

When Simon & Schuster announced two book deals with former Vice President Mike Pence and Trump official Kellyanne Conway, more than 200 staffers (about 14 per cent of all employees) signed a petition calling on the company to cancel the deals, and thousands from outside the company added their support.

Why are staff so incensed? Apparently insiders have said that young and junior employees have seen the work of some authors as potential publicity risks, but have found it hard to get older, more conservative executives to take them seriously. But the rise of such movements as Black Lives Matter and #MeToo has enhanced and legitimised their concerns.

While the publishers say they are committed to publishing a broad range of views and their decisions are based on a moral code, some staffers allege they are only guided by profit. The Simon & Schuster employees argue it’s a betrayal of the company’s policy of opposing bigotry to publish Pence’s memoir.

It’s a tricky, disturbing debate, with few insiders prepared to go on the record. And as Grady points out, it raises fundamental questions. “Is the industry’s purpose to make the widest array of viewpoints available to the largest audience possible? Is it to curate only the most truthful, accurate, and high-quality books to the public?

“Or is it to sell as many books as possible, and to try to stay out of the spotlight while doing so? Should a publisher ever care about any part of an author’s life besides their ability to write a book?”

Here in Australia we haven’t yet felt the full impact of this movement. Pressure not to publish does exist, but it tends to come from outside, as in the case of Clive Hamilton’s Silent Invasion, a critique of China’s operations in Australia that was abandoned by three publishers for fear of legal action from Beijing, until Hardie Grant published it in 2018. And good on the company for doing so.

Of course publishers turn down prospective books all the time, and are not expected to make their reasons public. But don’t expect this escalating debate to go away soon. I believe in airing all kinds of views in print, whether or not I agree with them or find them offensive. Yet somewhere, lines are drawn. The trouble is that at present, nobody can agree on where those lines should be.