Former university vice-chancellor Glyn Davis will steer and shape Australia’s bureaucracy after Anthony Albanese appointed him to lead the Department of Prime Minister and Cabinet.

Davis was most recently chief executive of the Paul Ramsay Foundation and previously led Griffith University from 2002-05 and the University of Melbourne from 2005-18. In the latter role, he also spent terms as chair of peak bodies the Group of Eight, Universities Australia and global network Universitas 21. 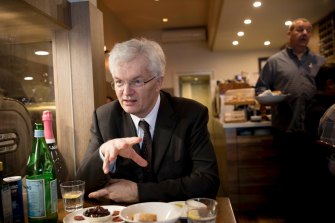 Long-time University of Melbourne head Glyn Davis has been appointed secretary of the Department of Prime Minister and Cabinet.Credit:Arsineh Houspian

He headed up Queensland’s Department of Premier and Cabinet from 1998 to 2002, under Peter Beattie’s premiership, and in 2019 was on the panel for David Thodey’s review of the public service.

Davis was also a co-chair of Kevin Rudd’s Australia 2020 summit, held in 2008 to help the new prime minister develop policies to shape the nation’s long-term future.

Albanese said in his first press conference as prime minister his government would value and respect public servants.

“Professor Davis will bring to the role of secretary a deep understanding of public policy and will work with my government in bringing about positive change for the Australian people,” he said in announcing the appointment on Monday.

The previous secretary of the Department of Prime Minister and Cabinet, Phil Gaetjens, stepped down, with Albanese revealing a week ago that deputy secretary Stephanie Foster was acting in the top job.

Gaetjens was previously Scott Morrison’s chief of staff, and then Treasury secretary when Morrison was treasurer. Labor had criticised his appointment as head of Prime Minister and Cabinet, the top job in the public service, as politicising the role.