The U.S. men’s national soccer team failed to qualify for the Summer Olympics for the third consecutive cycle.

The USMNT lost 2-1 against Honduras during the CONCACAF semifinals on Sunday, effectively ending their bid for the Tokyo Olympics. U.S. men’s national team coach Jason Kreis said the team was “absolutely devastated” by the loss.

“In our locker room, the guys are like it’s a tragedy — a tragedy,” he said. “I think we all wanted this so bad for so many different reasons … At the end of the day, I just don’t think we had enough.”

🎙️ “We are devastated, the locker room is a tragedy. We all wanted to achieve the goal but at the end of the day, I think we did not have much.” 🇺🇸 @USYNT ’s Head coach Jason Kreis coach.

The roster was filled with players younger than 23 years old because of a 1992 agreement between FIFA and the International Olympic Committee that settled on requiring teams to field players that age or under. However, four years later, teams were allowed to bring up three overage players. The team also did not have 22-year-old Christian Pulisic, widely considered to the best American soccer player, who instead played an international friendly with the senior team against Northern Ireland on Sunday.

The USMNT’s failed bid is another major disappointment after the senior team didn’t make the 2018 World Cup. 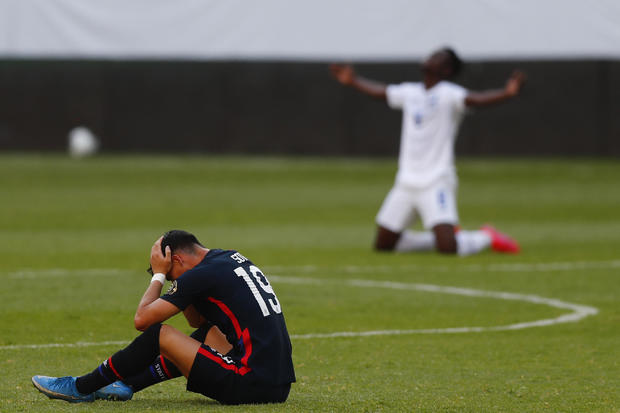 The U.S. women’s national soccer team is a different story. They won the most recent World Cup in dominating fashion — with TV ratings that outstripped the men’s — inspiring demands for equal pay.

Unlike the men’s game, each qualified nation sends their senior women’s national team to the Olympics. The USWNT qualified last year for the Tokyo Olympics, which were postponed until this summer due to the pandemic.

The U.S. men’s team has played in four Olympics but has never won a medal. The team last competed in the Olympics in 2008 in Beijing.