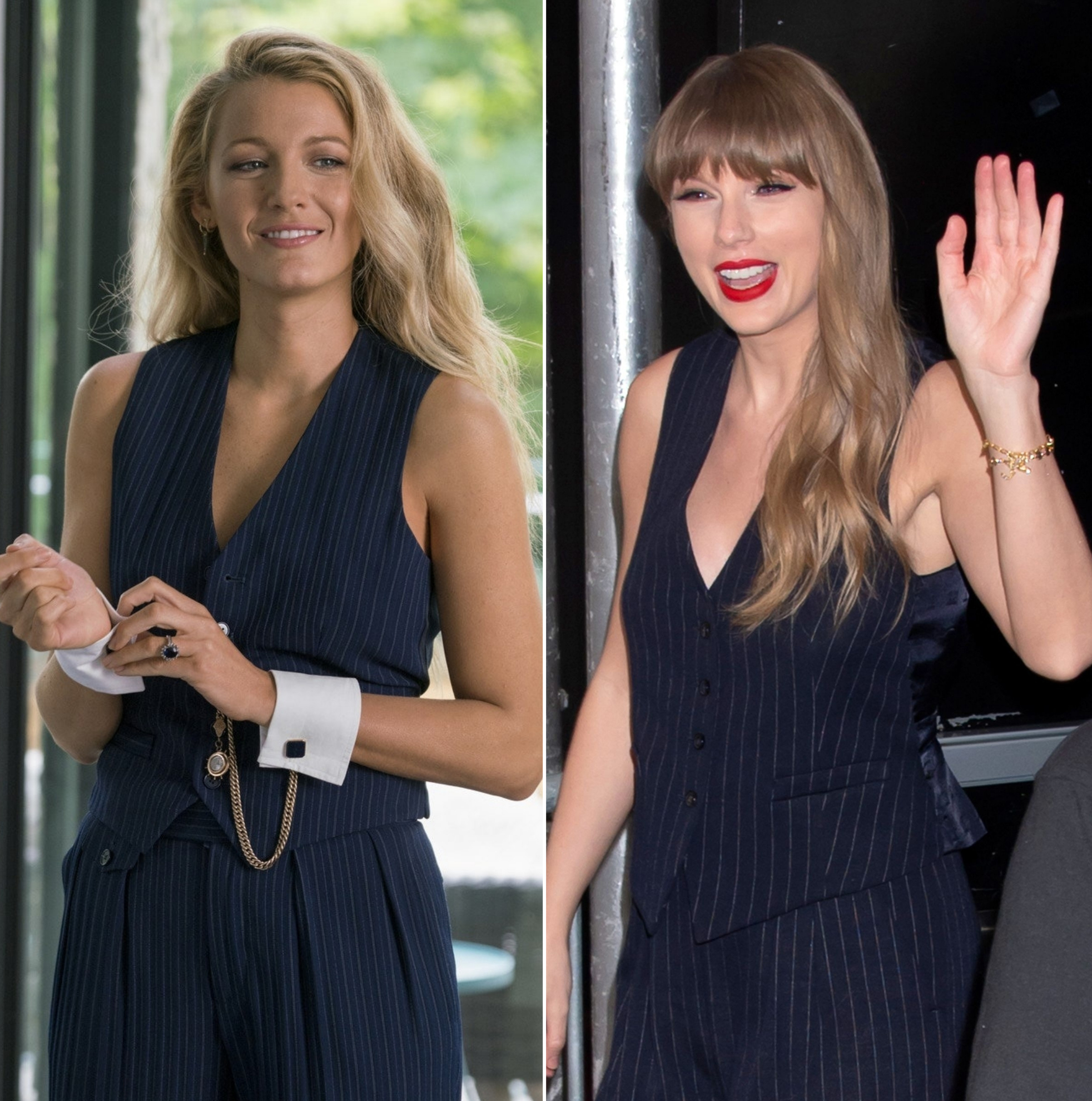 A fashionable BFF. Taylor Swift attended Tribeca Film Festival on Saturday, June 11, to talk about her short film All Too Well, and she had the support of Blake Lively, who also appeared to give her friend some fashion inspiration.

Swift, 32, donned a navy blue pinstripe waistcoat and matching trousers. She topped the look with a simple gold bracelet and relaxed waves in her hair. The “Fearless” singer completed the look with a bold red lip.

The pinstripe outfit is strikingly similar — though not identical — to the Ralph Lauren suit Lively, 34, wore in the 2018 thriller, A Simple Favor. The Gossip Girl alum modeled many menswear looks throughout the movie, which also starred Anna Kendrick, but she paired her navy suit with gold cuffs and a pocket chain. 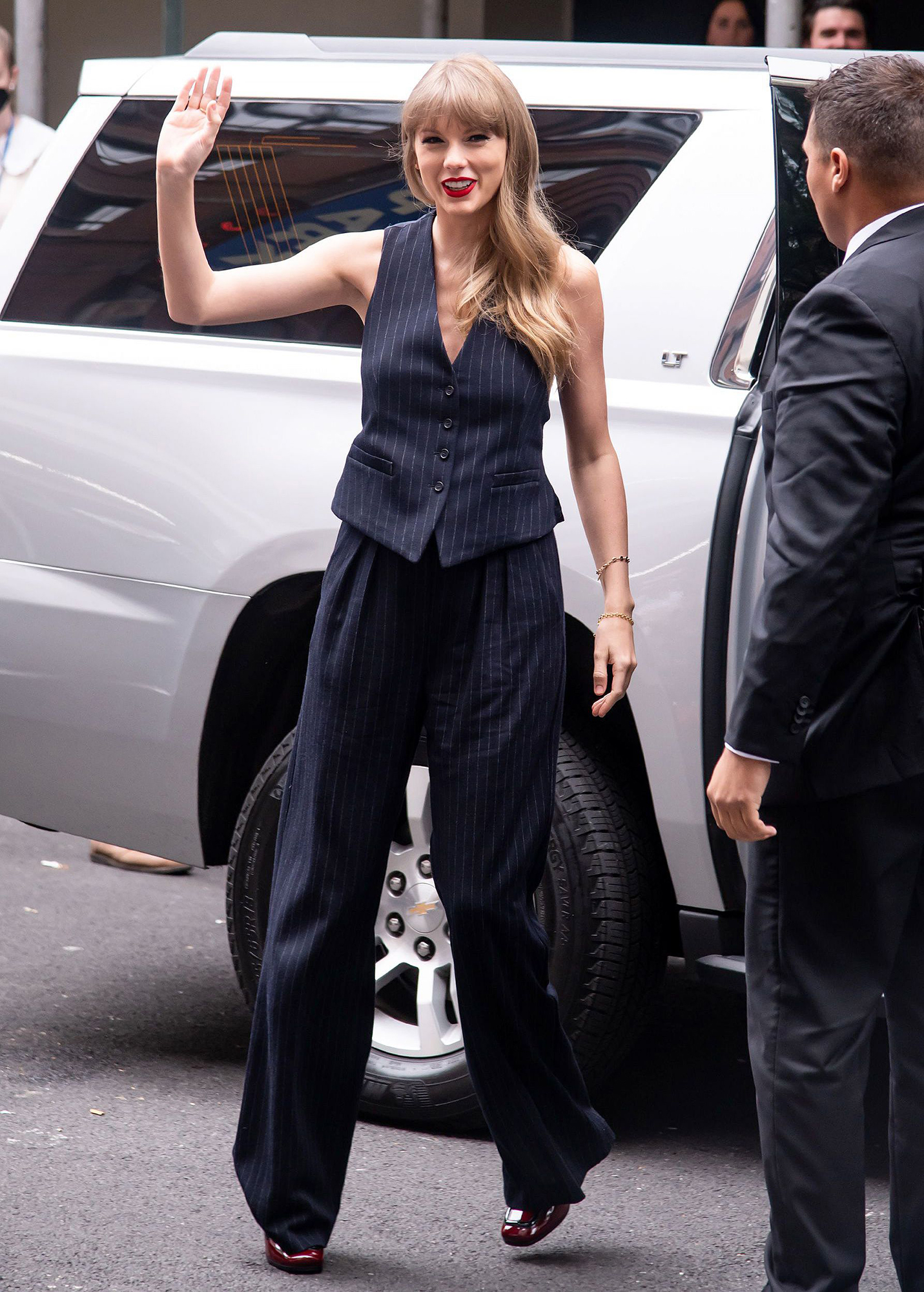 Lively was in attendance at Swift’s Tribeca Talk with husband Ryan Reynolds, but she wasn’t twinning with her pal and sometimes collaborator. The “I Bet You Think About Me” music video director wore a white sundress to the New York City event, which was also attended by All Too Well stars Dylan O’Brien and Sadie Sink.

While Swift handed the camera over to Lively, who made her directorial debut with the November 2021 clip, for her other single off Red (Taylor’s Version), the rerecorded version of her 2012 album, she nearly found another female director for All Too Well.

Inside Taylor Swift’s Friendships With Blake Lively and Ryan Reynolds

“My first instinct was to write the treatment and send it out,” she told the audience during Saturday’s discussion at the Beacon Theatre.

She wanted a female director for the short, but every name the Pennsylvania native asked was booked. Though she was happy for her favorite filmmakers to be in demand, Swift had to reevaluate what she wanted to do with the 10-minute song that her fans had been waiting years to hear. When the idea of her directing came up, she wasn’t so sure.

“I had this imposter syndrome in my head saying, ‘No, you don’t do that. Other people do that who went to school to do that,’” she recalled.

Swift made her directorial debut with 2018’s “The Man” music video, but the All Too Well short film was a different beast, shot entirely on 35mm film and with Swift barely appearing in it. “This is not a music video,” she assured the audience, according to Variety. “We approached everything differently.”

Despite her concerns about her inexperience, O’Brien, 30, praised her instincts as a filmmaker.

“She possesses these innate qualities in a director that I feel like are usually always tied to experience,” the Teen Wolf alum explained to the theater full of excited fans. “Trust, her ability to make a decision in the moment, her confidence, knowing what she wants, allowing her actors to just construct a scene on their own … her ability to just be like, ‘go,’ is so confident and so brave. It’s true. You can be talented and you can have great taste … but the on set ability [to create] that environment is special.”

All Too Well: The Short Film left Swift with an urge to direct a longer project.

“It would be so fantastic to write and direct something … a feature,” she said. “I don’t see it being bigger, in terms of scale. I loved making a film that was so intimate.”