Opposition Leader Peter Dutton has challenged Prime Minister Anthony Albanese to legislate a model for the Indigenous Voice to parliament before this year’s referendum, accusing him of treating the Australian public “like mugs” over the lack of detail ahead of a vote.

In a letter to the prime minister, seen by this masthead, Dutton said Albanese was making a “catastrophic mistake not providing accessible, clear and complete information regarding your government’s version of the Voice” which would, in turn, damage national reconciliation efforts. 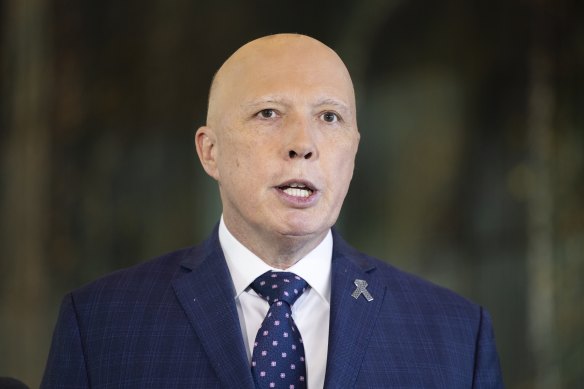 Opposition Leader Peter Dutton has accused Prime Minister Anthony Albanese of making a “catastrophic mistake” over the lack of detail in the Voice referendum proposal.Credit:Alex Ellinghausen

“In refusing to provide basic information and answer reasonable questions on the Voice, you are treating the Australian people like mugs,” the letter reads. “Your approach will ensure a dangerous and divisive debate grounded in hearsay and misinformation.”

Albanese mentioned the Voice as part of his government’s goal of promoting fairness in society, speaking on priorities for Labor in 2023 during a press conference in Geelong, Victoria, on Saturday.

The Liberal leader has thrown down the gauntlet for the government to introduce its preferred model to parliament before the referendum on enshrining the advisory body in the Constitution, which Minister for Indigenous Australians Linda Burney said could occur as soon as August.

“Given your government has been in office for seven months and has the ability to pass legislation in both houses of parliament, legislation for a Voice could be enacted when parliament resumes at the beginning of next month,” the letter says. 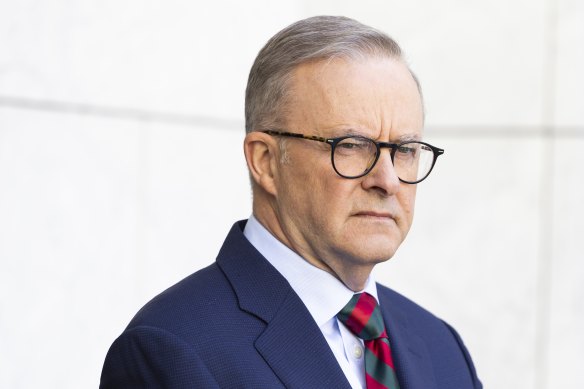 Prime Minister Anthony Albanese said the Voice was part of his government’s goal of enhancing fairness in Australia.Credit:Alex Ellinghausen

“This would allow you to demonstrate the effectiveness of your preferred Voice model in closing the gap.”

The government has a majority in the lower house, but must rely on the Greens and the support of one other to pass laws in the Senate, where two high-profile critics of the government’s approach – Greens senator Lidia Thorpe, and the Coalition’s Jacinta Nampijinpa Price – sit.

Dutton is yet to announce his party’s position on the referendum, but several Liberal moderates have called for the leader to allow a conscience vote on the issue following the resignation of MP Andrew Gee from the Nationals over the junior Coalition partner’s opposition to the Voice.

Tasmanian Liberal MP Bridget Archer said last month that allowing MPs to make up their own minds would be “the path of least resistance” and she hoped the party would learn lessons from the debate over same-sex marriage, which ended up being “harder than it really needed to be”.

Dutton’s letter says: “Your government’s position that detail isn’t needed before a vote and will be contained in subsequent legislation is unreasonable, disrespectful to the Australian public and undermines the integrity of the process.”

Last month Albanese pointed to a 2021 report by Indigenous academics Marcia Langton and Tom Calma, commissioned by the former Morrison government, saying it contained “280 pages of detail about how the Voice will operate”.

The report includes a proposed model for the Voice of 24 members, comprising two from each state, territory and the Torres Strait and a further five members from remote areas of the NT, WA, Queensland, WA and SA as well as a Torres Strait Islander living on the mainland.

But the Albanese government has not formally adopted this model as the one it will seek to legislate following the referendum.

Burney has accused people “wanting Is dotted and Ts crossed” of having their own agenda, but promised ample information in the public domain before the referendum. However, she conceded that the exact model would be settled after the vote.

In his letter to the prime minister, Dutton listed 15 questions he wanted answered about the Voice, many of which he read in parliament on November 30. Some of those include: Who will be eligible to serve on the body?; What are its functions and powers?; and, How much will it cost taxpayers annually?

“You have engaged two of our country’s smartest political operatives, but their advice to you on rushing the referendum and not providing details to the Australian public is wrong and must surely go against your natural instinct,” Dutton writes in reference to Albanese’s chief-of-staff, Tim Gartrell, and campaign strategist, Mark Textor, who are both lending their skills to the proposal.