In his final novel, Tender is the Night, F. Scott Fitzgerald describes one summer’s afternoon in 1925, when his protagonist Rosie, an American actress, is pottering around Amiens in northern France with her future boyfriend, whiling away the hours until dinner. “It was one of those uneventful times that seem at the moment only a link between past and future pleasure,” he writes, “but turn out to have been the pleasure itself.” 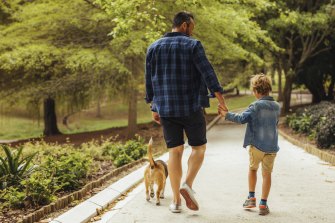 A new generation of happiness scholars point to these small but significant moments as the bread and butter of happiness itself.Credit:iStock

It was an appreciation of those small, fleeting moments of fulfilment. We can all recall our own: a hand held by a loved one; the sound of rain on the roof as you drift off to sleep. Artists and musicians have long considered these joyful vignettes to be the bedrock of human happiness. Think of Lou Reed’s Perfect Day, consisting of nothing more than “sangria in the park” and “feed[ing] animals in the zoo.”

And now neuroscientists are starting to agree.

The past few decades have seen an explosion of research into the so-called “science of happiness”, fuelled by advances in brain-scanning technology, plus a broader cultural shift towards seeing happiness as a key index of human development. New Zealand now claims to focus on “gross domestic happiness” rather than gross domestic product. In the UK, it’s been a decade since David Cameron asked the Office for National Statistics to launch a “happiness index”.

Traditionally, happiness scientists have examined big-picture questions. Looking at your life in its totality, they might ask, are you broadly content? Do you find meaning in your job? Do you feel liked by your friends, and valued by your family? Debates can be controversial, none more so than the question of money. In 1974, economist Richard Easterlin famously found that money does indeed buy happiness – but only up to a point, after which extra cash makes little difference. It became known as the “Easterlin paradox”.

Age is another major area of inquiry. Studies suggest that most (but not all) of us move through life on a U-curve, in which happiness is high during our youth, before dropping in midlife, then rising again in our twilight years.

But now a growing number of happiness researchers are choosing to ignore these big-picture questions altogether. Instead, they’re focusing on short-term cheeriness, or “mood”. How you feel from hour to hour matters, they argue, perhaps even more than your broader life “contentment”, which is famously difficult to define or measure, and thus frustratingly tricky to do anything about.

Are you grumpy because someone has been rude to you on the train? Or are you upbeat because a friend has complimented your new jacket? Economists have usually written off questions such as these as unimportant “noise”, but the new generation of happiness scholars point to these small but significant moments as the bread and butter of happiness itself. Which is good news for anyone who has felt their joy slipping away from them recently. Hold on to the small moments and the bigger picture of gloom doesn’t have to be as overwhelming as it first seems.

A key proponent of the new mood school is Robb Rutledge, honorary associate professor at University College London. In January he launched his new app, The Happiness Project, which has been downloaded more than 15,000 times. It is the largest study of its kind, specifically designed to identify the triggers of our short-term mood.

Users are asked to input demographic data about themselves. Then, they play four games, themed around uncertainty, effort, and learning – attributes thought to be crucial to short-term happiness. In one game, you play as a fisherman, deciding how much energy to give to each catch. In another, you’re an archaeologist unearthing tablets of varying degrees of value.

While playing, users are asked every 30 seconds to rank their happiness on a sliding scale. From tiny minute-by-minute movements, Rutledge hopes to collect vast amounts of data from which he can pinpoint the causes of high and low moods.

“Whether you feel good or bad right now is such a dominant feature of our conscious experience,” he says. “If you’re in a bad mood, you make different decisions. When I started this research, I found it surprising it wasn’t better understood. It changes pretty rapidly, and that’s actually ideal for doing detailed science.”

Last week the project delivered its first results. Data from one of the games – which looks specifically at the role of expectations – suggest that to optimise happiness you should lower your expectations slightly, but not so low for so long that it saps your motivation. Rutledge even produced a formula. More results will follow later this year.

The project could give a particularly useful insight into mental illness. When diagnosed with clinical depression or anxiety, patients are asked about their mood, not their broader life fulfilment. “People [with] specific patterns of happiness in the games might be better treated in certain ways,” Rutledge says. “Some might be really bothered when they have to press buttons faster to get points; others might be most bothered when they know they can’t win any points in the next section of the game. If we can better understand what makes happiness go up and down from minute to minute… then we can ask whether this also helps us predict and understand symptoms.”

His approach challenges the teachings of ancient philosophers such as Plato and Confucius, who were far more interested in explaining happiness through profound concepts such as “virtue” and “harmony” – and, for Aristotle, “serving the greater good”.

But the focus on minutiae is catching on. In recent years, some researchers have become interested in small moments of “awe”, defined by psychologist Professor Dacher Keltner as “the feeling of being in the presence of something vast and greater than the self”. Think of a starry night in the countryside, or catching a sunset from the perfect angle.

In our social lives, too, small moments are getting big attention. We tend to think it is our close relationships that determine the lion’s share of our happiness, but a growing body of research suggests that loose, vaguely held “acquaintances” are more important than we realise. Think of the barista at your local coffee shop whose face you recognise, and whose first name you just about remember.

As fickle as it seems, recording someone’s minute-by-minute mood might also provide a more methodologically robust insight into their state of mind. If you ask a broad question such as “Are you satisfied with your life?” it comes loaded with social pressure. Respondents are incentivised to lie, even to themselves. “They’re thinking, ‘What’s a good answer [my questioner] wouldn’t find weird’,” says Rutledge. “It’s well noted that parents of young children are often unhappy because they’re having to deal with something that’s challenging. But they will usually say they’re satisfied.”

There’s a danger, of course, that some users of Rutledge’s app might develop an unhealthy obsession with charting their mood. A study at the University of California suggested that those who place the highest value on “being happy” are actually less happy than those who don’t care so much. Other experiments suggest that those who actively pursue happiness are more likely to experience existential angst, agreeing with phrases such as “time is slipping away from me”.

Does Rutledge worry he might create thousands of happiness-obsessives? “People don’t have to read what we discover,” he says, with a chuckle. But his findings could be fascinating if we do choose to look at them, he thinks, providing an unprecedented insight into our inner emotional terrain. And they might even cheer us up.