Thousands of people across the state are beginning the mammoth clean-up effort after devastating floods left hundreds of homes uninhabitable, as parts of the state are bracing themselves to see more rain on Sunday.

It comes as Sydney recorded its eighth-wettest July ever after experiencing almost four months’ worth of rain in the past few days. The Sydney Observatory Hill weather station has recorded 281mm of rain this month, well above its monthly mean of 96mm. In 1959, the station recorded more than 330mm of rain in July. 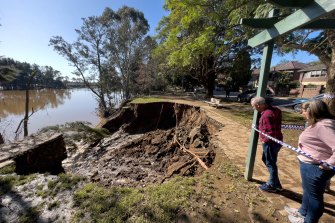 Significant bank damage in Windsor, on the Hawkesbury River, which experienced another flooding event this week.Credit:Nick Moir

More than 2200 homes and businesses have been assessed for flood-related damage, with 239 deemed not habitable and a further 973 requiring repairs, a NSW SES spokesperson said.

There are 44 evacuation orders and 17 warnings in place across the state, impacting 36,000 people. The NSW SES is focusing the majority of its efforts in the Hunter and lower Hawkesbury areas.

Weatherzone meteorologist Andrew Schmidt said while the weather had been clear over the last few days, Sunday could bring a fresh deluge. He said the low-pressure system was still lingering in the Tasman Sea with southerly winds pushing more rain over much of the NSW coast.

Areas around Sydney and the Newcastle region could get between 10mm and 20mm of rain on Sunday, while the Illawarra district is due between 20mm to 40mm.

The rain is expected to move away from coastal areas on Monday, although it could return as soon as Wednesday. Schmidt added cold morning temperatures would hit Sydney next week, particularly in western parts of the city.

It will get as cold as 4 and 6 degrees in Camden and Richmond next week; Parramatta will experience morning temperatures between 6 and 7 degrees.

Earlier this week, Prime Minister Anthony Albanese announced flood victims from 23 regions could access emergency payments of $1000 per adult and $400 per child in financial assistance.

Flood-affected residents from areas in the Hunter Region such as Bayside, Dungog, Lake Macquarie, Maitland, Singleton and Upper Lachlan will also have access to the funds, bringing the total number of regions to 29.

The Bureau of Meteorology said Campbelltown recorded its highest ever daily total rainfall amount for any month in July across more than 30 years of data. Six rain gauges with more than 100 years of observations set a record four-day total for July.

The highest four-day totals, over 400mm at many sites, were across the Hawkesbury-Nepean catchment including at Darkes Forest in Wollondilly Shire, Robertson near Bowral, Audley in the Royal National Park south of Sutherland and Albion Park in Wollongong.