For my generation, the moon landing in 1969 was a huge boost to optimism. There was hope for mankind, despite what was happening in Vietnam. For a later generation, the explosion of the Challenger in 1986 was a galvanising shock: we must do better. 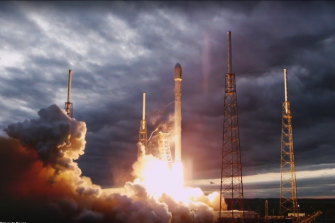 Watching Elon Musk stand nervously in the control room of his SpaceX company as two American astronauts dock at the International Space Station, to be hugged by two Russians and one American, is perhaps a definition of cognitive dissonance. We can do this but not stop a war in Ukraine?

Return to Space is about the triumph of commerce, as well as rocketry. It’s about the return of American business to the great quest, after Challenger sapped the US government’s willingness to pay. Musk wants to commercialise inter-planetary travel – to put a human on the moon and then Mars with re-usable rockets, rather than NASA throwaways. The film shows how much cheaper that is, if not how much money Musk is now making from becoming NASA’s preferred launcher. He may now be the world’s richest man, but to be fair, he bet the farm on this project.

We learn a lot about his energy and manic creativity. It’s like being in the room with Howard Hughes – except that Musk is a product of South Africa and Canada, as well as America. His capitalism is driven by boyish nerdy dreams about becoming a multi-planet civilisation. He doesn’t say how we’re going to avoid wrecking other planets but he wants us to talk about it.

The film is another jigsaw creation by Jimmy Chin and his partner (and wife) Elizabeth Chai Vasarhelyi. Chin made his name hanging off mountain ropes with a camera, filming climbers. These two brought us two excellent adventures in Free Solo and The Rescue, about the Thai kids in the cave. They’re very skilled at assembling a film, rather than just shooting it. They couldn’t go to space, but the cameras were already there. They can and do follow the two Americans who will return to the ISS on the first commercial American spacecraft in a generation; they can and do get close enough to smell Elon Musk’s fear as they launch. Don’t ask whether it’s worth it: the job is to boldly go, and these are the nerds making it happen. No-one in Houston ever said “oh f—” in the control room, but this is “Space, Generation X”, dude.

It’s fabulously watchable, even at 128 minutes, because we learn more about these humans than about their machines. Returning to space is about the dream of a better humanity, not just money. On that level it is good to invest a little hope.