As he pondered reinventing one of ballet’s greatest masterpieces for 2023, the Australian Ballet’s artistic director David Hallberg had a big decision to make: should Swan Lake have a happy ending?

The ballet, which premiered at the Bolshoi in 1877 to Tchaikovsky’s infectious, heartrending music, is a folk tale about a princess cursed into swan’s form, who (sorry, spoilers) leaps to her death with her princely lover. 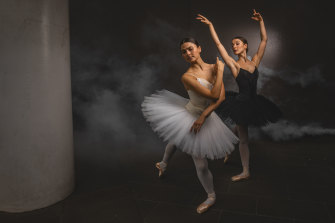 Australian Ballet dancers Valerie Tereshchenko (white) and Benedict Bemet (black) who will be performing in the brand new production of the ballet classic Swan Lake.Credit:Scott McNaughton

At least, that’s how it usually goes, as the orchestra swells and ballet-goers sob into their sleeves. But from time to time over the decades directors have taken pity on the couple and given them a happy ever after.

It’s not an entirely outrageous move. There is licence in Tchaikovsky’s score: at the thunderous climax the famous ‘flight of the swans’ motif suddenly switches from a tragic minor to a triumphant major key.

“That’s kind of the big question,” says Hallberg. Dancing as the prince, he’s played the happy ending, he’s wept alone on the cliff after his love’s leap, and he’s joined her.

All options were open to him when he persuaded the company to leave behind its Graeme Murphy Swan Lake – a rather radical 2002 reinvention loosely based on Princess Diana and Prince Charles’ marriage breakdown – and premiere a more “classic” take.

In the end, he decided they both had to go off the cliff.

“I think it adds something poignant,” he says. “Like, the things that you will do for true love.

“Waking up and it being all happy and everything’s resolved isn’t really my cup of tea. It’s not really the way I like to see art – I personally like a little bit of struggle.” 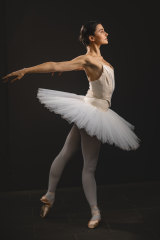 Hallberg, who joined the company two years ago, quickly decided it had to say farewell to the Murphy reimagining. Though the production, commissioned by then brand-new artistic director David McAllister, had been a huge success story for the company (an attempt at a return to a more traditional version in 2012 fell flat with critics), the contemporary references had aged and it had started to feel dated.

“I think every major ballet company in the world has to have Swan Lake in their repertoire and this was a gap that I knew I needed to fill,” Hallberg says.

He went into the company’s archives, which detailed every version it had performed, right back to its first-ever show in 1962. And he found Anne Woolliams’ iconic 1977 production, which lasted for 25 years until it was replaced by Murphy.

“And I thought, why try and reinvent the wheel?” says Hallberg. “Sometimes, you know, the classical repertoire is there for a reason and it has stood the test of time. So I thought, why not go back to a version that was so important to the company, but give it fresh life?”

He watched footage from a 1986 production in Adelaide – with David McAllister as a jester – and was captivated.

There were “beautiful nuances” in the choreography, he says – wonderful unison in the swans, a geometry in their intersecting dance.

There will be additions, of course (Woolliams herself made major changes in 1991).

“I’m very respectfully and sensitively going through certain sections and updating them,” Hallberg says. It’s partly because he can: he has 20 more dancers to work with, and in the intervening 35 years the technique of dancers has vastly improved. He can ask more of them than the old version did; steps can be harder, more clarified, more precise.

And there will be a new set design and new costumes, at vast expense. The Ballet went to philanthropists to find the funds to make it happen. “We want to do it justice,” Hallberg says.

“Swan Lake is the most famous ballet in the world. And you have to have a version that upholds the timelessness of the work, but also gives it the validity of being still performed to this day.

“My artistic vision is to show Australian audiences the best classics in the world. And this is absolutely number one.”

The Australian Ballet will announce its full 2023 season later this year. A waiting list for Swan Lake tickets can be found at australianballet.com.au.