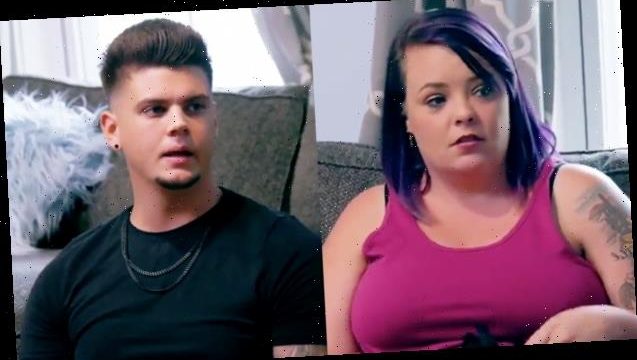 Are Catelynn Lowell and Tyler Baltierra ready for another kid? We’re not too sure after watching the Feb. 9 episode of ‘Teen Mom OG’, during which they had a huge blowout fight.

Pure chaos ensued during the Feb. 9 episode of Teen Mom OG, when one of the show’s producers told Tyler Baltierra and Catelynn Lowell that a bouncy house might be closed. Tyler and Catelynn had taken their daughter, and Tyler’s mom, to some sort of apple orchard in hopes of treating Nova to some time on the inflatable jumper, but when Nova heard it might be closed, she started panicking. And unfortunately for Tyler and Catelynn, they suffered the consequences.

Tyler “felt bad”, so Catelynn took Nova over to the bouncy house to confirm whether or not it had closed. Luckily, the bouncy house didn’t appear to be closed yet, so Tyler started screaming at Catelynn and told her to take Nova into it immediately. “Just go! Go! Take her, go!” he yelled, before she questioned whether or not he and their youngest daughter, Vaeda, would be joining them. “I’m going to sit here with her!” Tyler yelled back, as his voice got even louder. “You go take her before it closes.”

“Whoa,” Catelynn replied, before asking Tyler why he was yelling at her. “Cause you’re looking at me like I don’t know what the f*** I’m doing,” he snapped back. “I’m going to sit with the baby — so take our other child before it closes. It’s going to close!”

“Don’t be a d*** to me,” Catelynn said, as she grabbed her purse and went to take Nova to the bouncy house. Tyler later apologize, but not until after he requested that Catelynn also apologize. He claim she “snapped” at him, but to be honest, we didn’t see that. Either way, they both apologized and decided to move forward with plans for another baby — something they discussed earlier in the episode — despite the headache that just two of their children caused them this week.

Meanwhile, the other ladies dealt with their own individual drama. For Mackenzie McKee, it was the unexpected news of her dad needing quadruple bypass surgery, which put a pause on her move to Florida. And for Maci Bookout, it was son Bentley’s performance in school — apparently, he failed an open book test. So she and husband Taylor McKinney had a tough talk with him about prioritizing schoolwork (not before his faith, though).

Amber Portwood also dealt with some feelings when Gary and wife Kristina invited her to go on a boating trip near her old home — the one her ex, Andrew Glennon, is currently living in. And Cheyenne Floyd finally told her friends she had reunited with Zach — news they didn’t initially love. But once Zach answered some tough questions from them, they gave Cheyenne their seal of approval. We’re just not so sure Cory Wharton will react the same way.