Lithuania’s Foreign Minister Gabrielius Landsbergis says Australia should impose tough sanctions on Russia and send resources to Ukraine if it invades the country, warning there would be consequences all over the world unless Moscow was punished.

Speaking at the National Press Club in Canberra on Thursday, Mr Landsbergis said the Russians “have what they need for a full-scale invasion, the likes that we haven’t seen since the Second World War”. 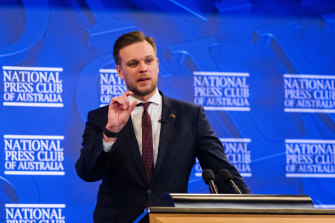 Lithuanian Foreign Minister Gabrielius Landsbergis said it was in Australia’s interests for Russia to not invade Ukraine.Credit:James Brickwood

It came on the same day Defence Minister Peter Dutton said China and Russia were forming an “unholy alliance” that “should cause great concern right across the world but in particular in our own region”.

There is growing concern that Russia will invade Ukraine in the coming weeks after it has amassed more than 100,000 troops near its border and sent warships towards the Black Sea.

Ms Landsbergis said Europe and its allies needed to impose “unbearable” sanctions on Russia to make Vladimir Putin think twice about any invasion, adding he believed the Russian president was a “rational actor”.

“So what’s in Putin’s mind? Some sort of calculations that we’re not aware of. And the only way we can convince him [to not invade] is actually to show him the price that he would need to pay,” Mr Landsbergis told The Sydney Morning Herald and The Age after delivering his speech.

“The price would have to be larger than any benefit they see from the incursion.”

Asked whether Lithuania expected Australia to join in sanctions and contribute resources to Ukraine in the event of a Russian invasion, Mr Landsbergis said “all of those”.

“But in any case, I think Australia is in a position really to join in this global alliance for the support of the global rules-based order.

“And one way, yes, is to join in the sanctions. Another is send the resources to Ukraine, but I’m sure that the government in Australia will make the right choice.”

Mr Landsbergis said it was important for like-minded countries like Lithuania and Australia to join together to push back against authoritarian countries including China and Russia, which he believed were trying to “disrupt” the “rules-based order”.

China hit Lithuania with numerous trade strikes last year after it agreed to exchange mutual representative offices with Taiwan, which Beijing regards as a breakaway province. This included suspending rail freight to Lithuania and halting export permits for the country’s agriculture and timber industries.

Mr Landsbergis said Australia and Lithuania both responded to China’s trade strikes in a similar way because “we understand that if you give in to bullying, basically you just open a path for others to be bullied, and the same measures would be used against others”.

He said it was “not easy” to push back against countries like China so it was important to be transparent with Australians and Lithuanians that there was a “price” for “standing up for what’s right”.

In his speech, Mr Landsbergis said Lithuania believed the people of Taiwan have the right to call their representative office whatever they want.

“We’ve been very specific that we adhere to our One China policy. We didn’t break our rules and obligations,” he said. “We figured that China would be upset, and we would be upset that they would be upset, but it should end there.”

An Australian parliamentary inquiry by the Joint Standing Committee on Foreign Affairs, Defence and Trade, headed by Liberal MP Ted O’Brien, on Thursday released a report urging the government to consider striking a free trade agreement with Taiwan, which would likely anger Beijing.

The committee also recommended Australia should support the expansion of the Comprehensive and Progressive Trans-Pacific Partnership (CPTPP) to include new members such as Britain, South Korea and Taiwan.

But Mr O’Brien, said new members should not be allowed in “unconditionally”, suggesting China would have to commit to no longer using coercive economic measures.

The committee also recommended Australia should consider negotiating a separate trade agreement with Taiwan, which the federal government has so far resisted.

“A lesson from our experience with the UK is that benefits accrue from negotiating a bilateral FTA and the CPTPP at the same time, and we see merit in replicating this approach with Taiwan,” Mr O’Brien said.