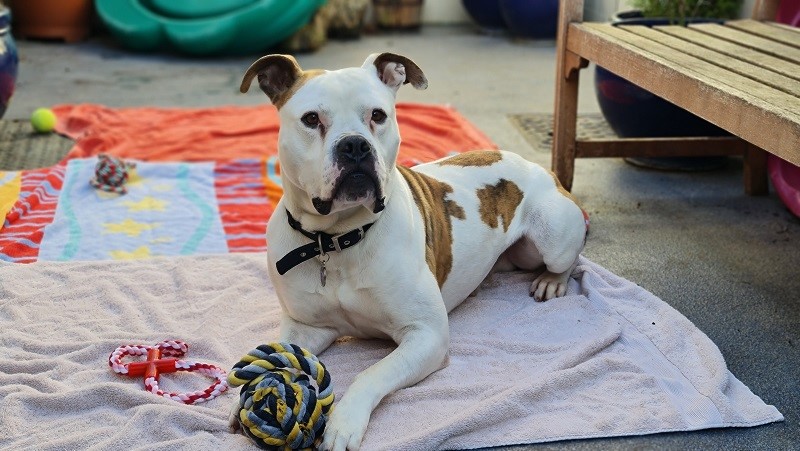 An animal charity is appealing for a home for its longest-staying rescue dog, who they believe has been overlooked due to stereotypes about bull breeds.

American Bulldog, Zeusy, has been at Mayhew’s Kensal Green animal shelter for 11 months now, and is facing Christmas without a family.

Zeusy, five, was first spotted tied to a lamp post in North Wembley in January, when two concerned passers-by untied him and brought him to the charity.

When he first arrived at Mayhew, his initial response to the animal welfare team was one of fear and anxiety, manifested by his barking and growling.

He was examined and found to be in good overall health, but although Zeusy was microchipped, the named previous owner didn’t respond to outreach attempts.

Merryn Walker, Mayhew Head of Kennels, Dog Adoptions and Fostering says: ‘Zeusy is of those sad stories you read about over Christmas. When Zeusy came to us, he was clearly terrified and traumatised after having been left tied to a lamp post on a cold January night.

‘We have no idea how long he had been left there and it is only thanks to the concerned people who spotted him that he is with us today. Who knows what could have happened to him otherwise.

‘As we have been unable to contact the owner, we have no history whatsoever about Zeusy which would be incredibly useful for us.’

Despite the scared pup’s reactions at first, she describes his temperament as ‘affectionate and intelligent,’ saying that Zeusy ‘needed the right support and training,’ to come out of his shell.

As part of this process, Mayhew Clinical Consult Behaviourist, Beverley Saucell, has worked closely with Zeusy to address associative behaviours or reactions triggered by certain experiences.

She assessed the dog’s history and found that he was socially motivated but unsure how to interact, creating a training plan that focused on improving his confidence.

Beverley explains: ‘The main feature of Zeusy’s training was about making it fun. Play was the focus to help with him overcoming his issues.

‘We worked on strengthening Zeusy’s bonds with people by giving him choices about approaching, and used rewards-based training by giving him praise, treats and toys when he showed courage when engaging with people.

‘This then encouraged Zeusy to offer more of the behaviour we were looking for. Zeusy is very trainable and biddable and would do well in a fun-loving home.’

Not only has the rescue become better at being around people and other dogs, he’s also been taught to say ‘hi’ to people using his nose, which gives him a way to bond in a controlled way.

‘It’s lovely to see him react like this,’ says Merryn. ‘He just needs an owner to give him the time and patience he really deserves after having been neglected and abandoned by whoever owned him.’

All this work was in aid of getting Zeus his forever home, but unfortunately his breed seems to have put potential adopters off.

The Mayhew team is now urgently appealing for people to look past the stereotypes, in the hope that Zeus will find his perfect family before Christmas.

Merryn explains: ‘We all have different personalities, some of us like to be reserved whilst others like to be the life and soul of the party. Bull breeds have a tendency to be stigmatised from the way they look to how they’ve been portrayed in the media.

‘Please don’t judge a dog by how it looks, just like we shouldn’t judge a human by how they look.

‘Zeusy is a smart and loving dog who we hope to find a loving forever home for so he isn’t alone this Christmas. That would be heart-breaking for the team at Mayhew.’

Ideally, staff would like Zeus to go to a rural or semi-rural home away from the hustle and bustle of the city where he can enjoy walks in quieter surroundings.

Could you be the person to make an overlooked dog’s Christmas dream come true?

If you think you could offer Zeusy a forever home, find out more and contact to adopt via the Mayhew website.