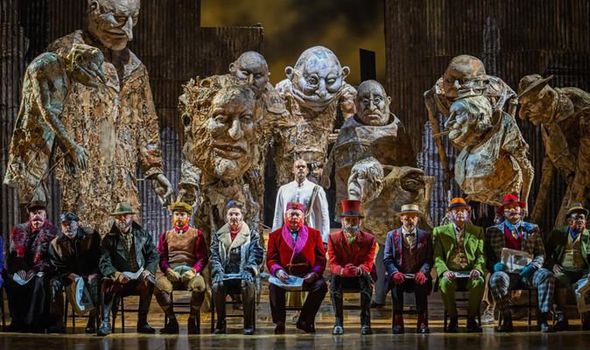 The strikingly imaginative production by Phelim McDermott and the Improbable theatre company relieved the tedium a little, but the composer’s idea of having it performed in Sanskrit increased my bewilderment.

The second time I saw it, four years later, (I thought its sheer originality deserved another chance) I began to understand it a little and was impressed by it. Satyagraha is, after all, based on the life and ideas of Gandhi; the title itself translated as ‘truth force’ and underlies Gandhi’s concept of non-violent resistance.

The repetitive nature of Glass’s music seemed to me to underline the patience needed to sustain his long, slow fight while the changing rhythms of the orchestra exemplified the turmoil of the world which the calm, measured singing of the performers had to overcome.

The return of the English National Opera to their home at the Coliseum gave me a chance to see it for a third time, after which my feelings are even more confused than before.

The singing, particularly by American tenor Sean Panikkar in the demanding role of Gandhi, was astounding; Phelim McDermott’s production, as before, was spectacular; the music was mesmerising and the orchestra, brilliantly and meticulously conducted by Carolyn Kuan, was glorious, but I am quite unsure whether I really enjoyed it.

Perhaps this is not an opera to enjoy but something to experience ‑ for it is certainly an experience.

My three-star rating, of course, is a complete cop-out. I strongly suspect that the majority of people seeing it will find it either a one-star piece of musical tedium (as I did the first time I saw it) or a five-star piece of remarkable theatre and music (which was my second opinion).

Philip Glass’s operas are quite unlike anything else one might see or hear.