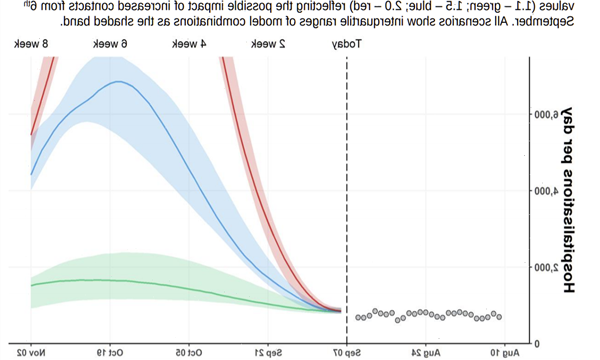 Even continuing at the current trajectory, admissions could double to 2,000 per day, according to some of the country's leading scientists – half the level seen at the January peak. 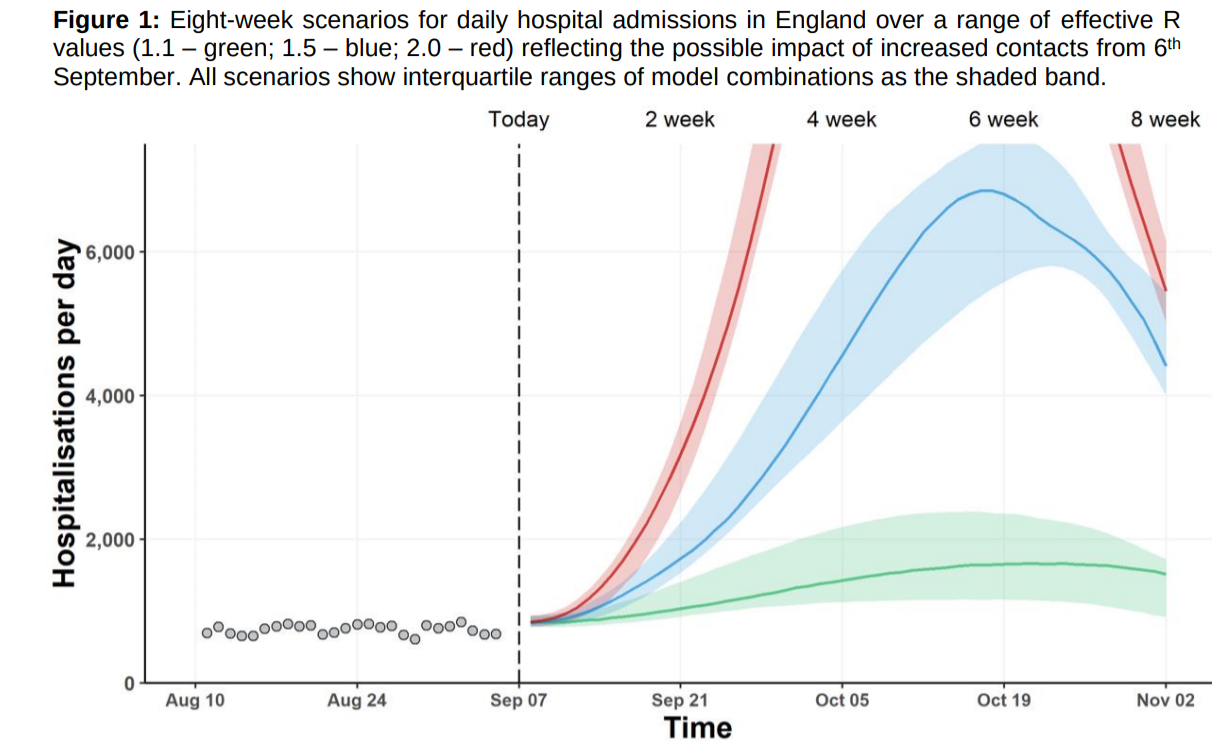 The Scientific Pandemic Influenza Group on Modelling (SPI-M-O) said either way, the UK is “currently experiencing high prevalence and likely entering a period of growth”.

A statement released on Tuesday but dated September 8 said there is still “the potential for another large wave of hospitalisations” as the coronavirus pandemic continues.

How the outbreak plays out is unclear, but SPI-M-O notes a number of factors that give the virus advantage – reopening of schools and offices, colder weather and waning immunity.

It said today: “It is highly likely that a significant decrease in homeworking in the next few months would result in a rapid increase in hospital admissions.”

Up until now, working from home has “played an important role in preventing” a growing outbreak, the group said.

The document also suggested that a peak of infections may occur in October to December instead of August to October, as previously expected.

Earlier modelling had considered a fourth wave peak in the late summer.

However, a return to normal behaviour has been slow, scientists said, suggesting is will now pick up again.

By combining the estimates of several modelling groups, SPI-M-O made projections for the next six weeks, based on the current trends.

“If combined with other winter pressures or seasonal effects; this could lead to a difficult few months for the health and care sector,” the paper said.

An R of 1.5 would see hospital admissions soar far higher than 8,000 per day, which was not visible on the graph.

The paper said this scenario was deemed to be “extreme”, and although “possible”, it was “highly unlikely”.

“A scenario of this scale might be more likely were waning immunity to play a greater role or if a new variant of concern were to emerge.” 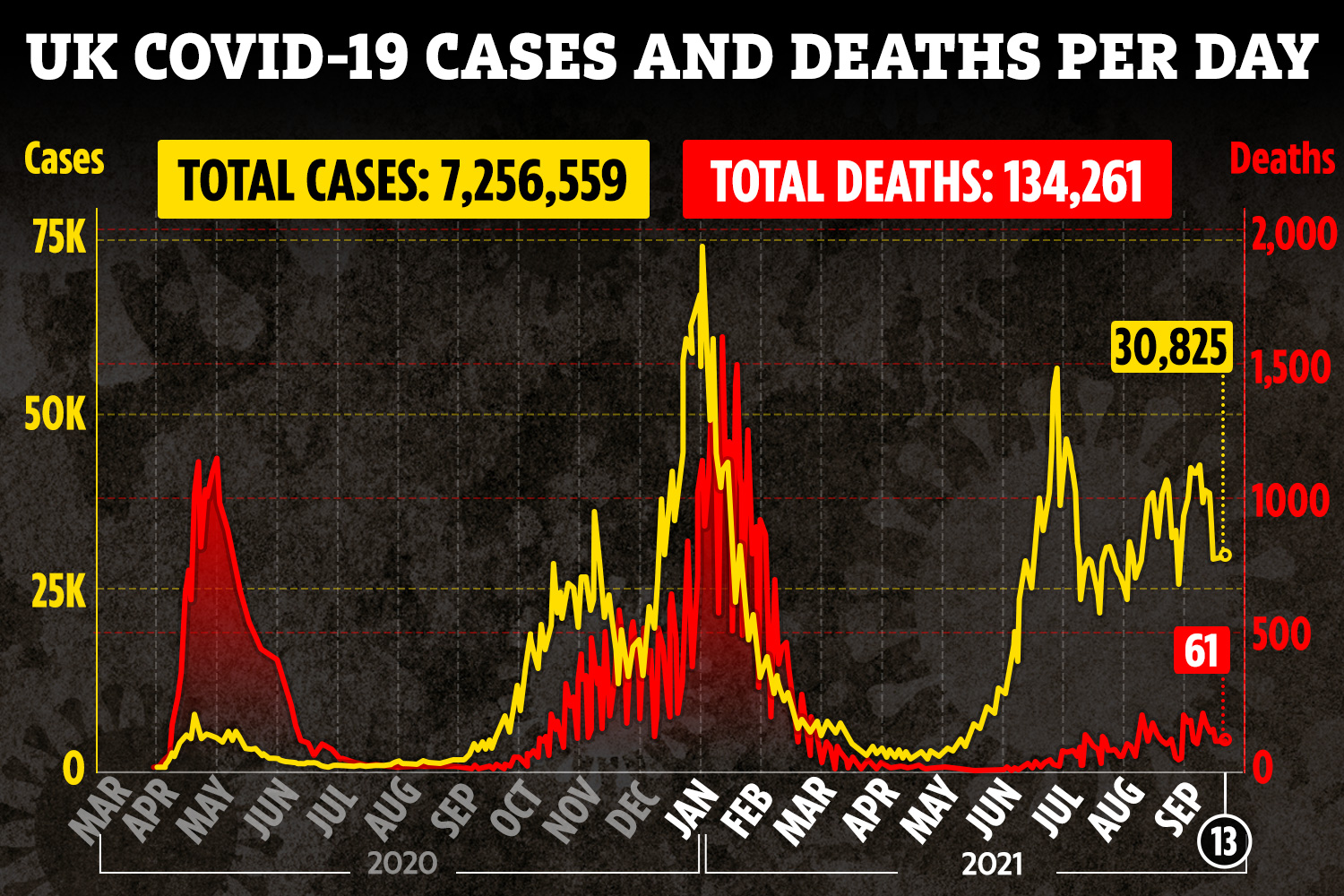 The virus is constantly evolving and the real threat is a version that can dodge immunity created by the vaccines in use.

There are five variants of concern in the UK which have emerged over the course of the pandemic.

Two – Alpha (Kent) and Delta (India) – have significantly changed the course of the pandemic because they were faster spreading and vaccine evading.

But hundreds of other coronavirus variants have been insignificant.

A separate paper documenting the Sage meeting on September 9 said the epidemic is “entering a period of uncertainty”.

It added: “Key uncertainties include the potential impact of any waning of immunity and any significant changes in contact patterns associated with increased attendance at workplaces and reopening of education settings.”

It comes as Boris Johnson lays out his plan to tackle Covid over winter – by learning to live with it.

A booster campaign that will reach all over 50s and the most vulnerable in society is at the core of the plan, providing optimal protection against severe disease.

Measures such as mandatory mask-wearing, home working and vaccine passports are being kept in reserve under “Plan B”.

Speaking in the Commons earlier, Health Secretary Sajid Javid said the tools in Plan B are “only if they are needed and supported by the data to prevent unsustainable pressure on the NHS”.

But there is no indication at what level of hospital admissions and occupancy and deaths are deemed acceptable.

Outlining a perfect storm, Mr Javid said: "We must be vigilant as autumn and winter have favourable conditions for Covid-19 and other seasonal viruses.

"Children have returned to school, more people are returning to work.

"The changing weather means that there will be more people perhaps spending time indoors, and there's likely to be a lot of non-Covid demand on the NHS including flu or norovirus."

And the Chief Medical Officer Prof Chris Whitty said: "Winter is coming, and people should still take this seriously."