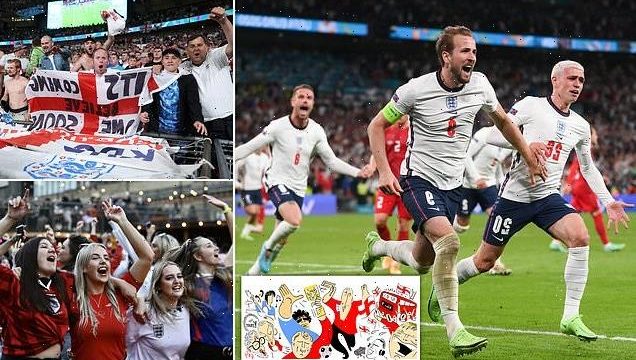 RICHARD LITTLEJOHN: I thought it was all over for me and football… it’s not now

Some people are on top of a bus. They think it’s all over. It isn’t, but what the hell. The tidal wave of young faces dancing, singing, waving the flag of St George was a joy to behold.

This was a moment of national catharsis, the day the dam burst and we threw off the mask, both physically and metaphorically.

There will be those who looked at the teeming crowds along Wembley Way, in Central London and across the country with horror.

All I could see was a nation casting off the shackles of Covid. Win or lose on Sunday, the game’s over for the merchants of doom who would keep us in lockdown for ever.

More importantly, this was a reassertion of Englishness, a liberated people unashamed of our nationality.

When I saw those fans bouncing up and down on the roof of a red Number 9 double decker at Piccadilly Circus, I could hear the opening bars of Sunny Afternoon, which was No 1 when England won the World Cup. 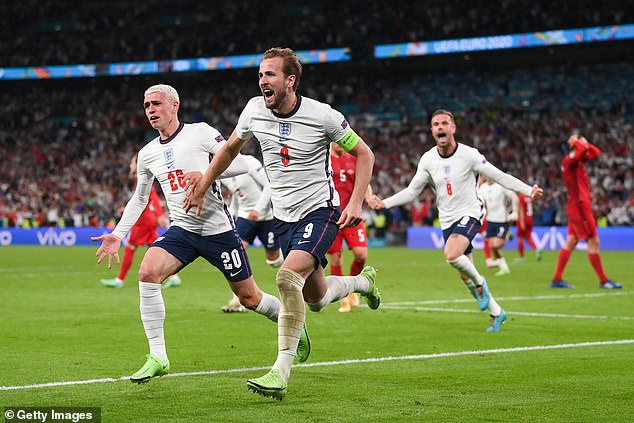 Every generation of English football supporters has its own soundtrack. For many it’s Three Lions. For me, it’ll always be The Kinks and the voice of BBC commentator Kenneth Wolstenholme.

OK, so in recent years I’ve made no secret of the fact that I’ve long since fallen out of love with the self-styled Beautiful Game.

How many times have I written that I hate everything about football, except the football? I can’t stand the cynical commercialism, the cheating, the spivvery, the bogus wokery, from the ludicrous rainbow laces to taking the knee.

But all that has been forgotten as England have progressed throughout this tournament. How could I not be captivated? Like it or not, football is part of my DNA.

In 1966, I was a star-struck kid, my bedroom walls plastered with pictures cut out of Charles Buchan’s Football Monthly.

Thirty years later, I was writing a football column for the Daily Mail and presenting TV and radio programmes. I was a guest manager on Frank Skinner and David Baddiel’s Fantasy Football series, along with John Motson and Peter Cook. 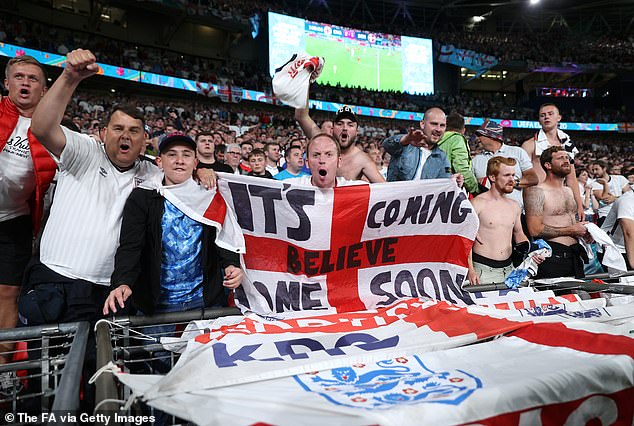 Jubilant fans celebrate with an ‘it’s coming home’ flag after England beat Denmark in the Euro 2020 semi-final, reaching their first final in a major tournament in 55 years

So did The Kinks’ Ray Davies, who sang, obviously, Sunny Afternoon in the run-up to Euro ’96.

And until this week, I’d almost forgotten that I also made a commercial video for Euro ’96, featuring Ken Wolstenholme. As Michael Parkinson once told me: ‘The great thing about our game, kid, is that you get paid to meet your heroes.’

I went on to present a football show for ITV and spent five years hosting BBC Radio 5’s flagship phone-in, 6-0-6. In that capacity I was on air the night a young tyro called David Beckham managed to get himself sent off against Argentina in the 1998 World Cup.

This was one of those legendary switchboard meltdown moments. We had 10,000 people trying to get through before the show even started.

So I shouldn’t need reminding how much football matters. We’ve all got that movie running through our subconscious, never more so than over the past couple of weeks.

So near and yet so far.

And so to Wembley on Sunday. So near once again, a first final in 55 years against a revitalised Italy, widely considered to be the best side in the tournament.

Yet England’s progress has been no fluke.

Until Wednesday night, they hadn’t conceded a single goal. And as for England’s advance being down to home advantage, which some allege, that doesn’t explain the 4-0 victory over Ukraine in Rome. How many times, too, have we seen previous England teams fail at Wembley?

Credit must go to Gareth Southgate, a modest, unassuming manager, moulded in Middle England, who got the job almost by accident.

Dismissed as a bland committee man in a blazer, he has emerged as a shrewd tactician with a streak of ruthlessness, who has assembled a group of talented young athletes with an admirable commitment to the collective.

Individual egos have been checked in at the door.

They are captained by Harry Kane, now ‘One of Our Own’ not just to Spurs fans but to the whole country. Kane, a kid from North-East London, is cut from the same cloth as the Class of ’66. 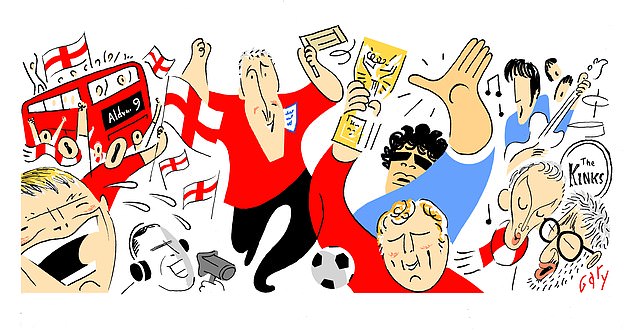 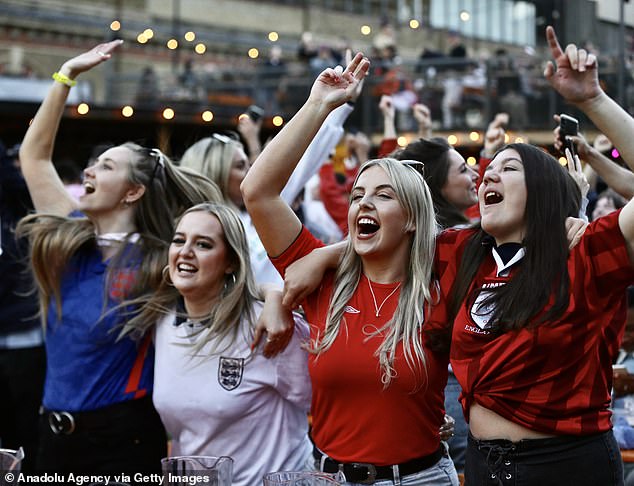 But unlike those World Cup winners, drawn pretty much exclusively from the white working class, today’s squad hail from more diverse backgrounds.

The outstanding performer so far has been Raheem Sterling, who moved to Britain from Jamaica at the age of five.

Bukayo Saka, the breakthrough star, was born in London to Nigerian parents. Others such as Kyle Walker, at 31 the oldest member of the team, are mixed-race.

Jack Grealish and Declan Rice qualify for the Republic of Ireland, but both chose England.

Listen to West Ham’s Rice talking with awe about his distinguished claret and blue predecessors Moore, Hurst and Peters from England’s 1966 victory and you know he isn’t simply sailing under a flag of convenience.

That this squad is truly representative of our modern multi-cultural society exposes the great lie of those who claim constantly that England is a cesspit of racism.

Try telling that to the young white kids wearing replica shirts with ‘Sterling 10’ on the back, or the black fans proudly sporting the Cross of St George on their cheeks.

What’s changed since the 1966 final is that back then supporters on the terraces tended to wave the Union Flag. England’s embrace of the St George’s Cross is a consequence of the rise of Welsh and Scottish nationalism, not evidence of racism.

Too often, the Left sneers at those who fly the flag of St George. Remember Labour’s Lady Nugee — aka Emily Thornberry — pouring contempt on a white van man flying flags from the window of his house? And Labour wonders why it lost the Red and White Wall.

On St George’s Day this year, I harked back to a column I wrote in this newspaper in 1996. I argued that far from being the xenophobic backwater of the Left’s imagination, England was a uniquely tolerant country, even then.

‘Over the past 25 years, we have absorbed and embraced millions of immigrants, not just from the Commonwealth and Europe but from all four corners of the world, without serious social unrest.

H ow many European governments can boast as many ministers from ethnic minority backgrounds as there are sitting around the Cabinet table?’ 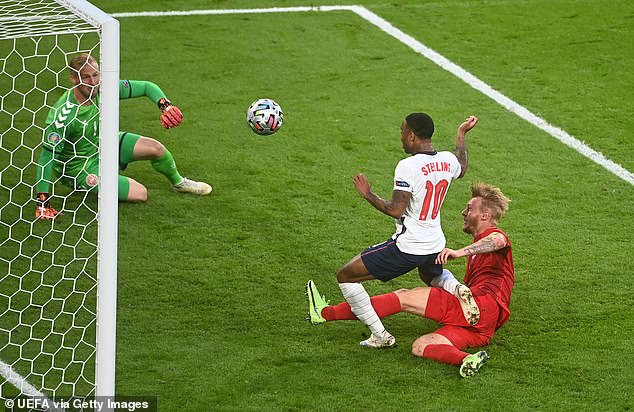 Denmark’s Simon Kjaer scores an own goal, giving England their first goal, whilst under pressure from Raheem Sterling during the Euro 2020 Championship’s semi-final match

To that, I would add: how many other countries could rustle up tens of thousands of expat foreign supporters to fill Wembley?

With Covid travel restrictions still in force, there’s been no shortage of support from Danes, Italians and Spaniards now living in England.

We’re always being told that the English must reclaim the flag from the Far Right.

Well, we’ve certainly done that during this tournament in grand style, thanks to Gareth Southgate and his band of brothers.

We all hope and pray that England win on Sunday. But if they fall at the final hurdle, they are a young, improving team and will come again. Whatever the result, they will still have done the nation proud.

Great sporting events always have the capacity to bring people together. The 1948 Olympics marked the start of Britain rebuilding after World War II.

We are just emerging from the most difficult period in our history since that awful war. Southgate’s heroes have not only given us hope, they have given us something to cheer and we have celebrated by taking back our liberty.

If nothing else, they’ve even managed to rekindle this old cynic’s love of football, just when I thought it was all over.

Come on England. Everybody back on top of the bus!