Households in NSW may soon be able to select renewable gas just as they can buy their electricity from clean energy sources, allowing users to buy gas produced from wastewater, food and garden waste.

In what the NSW government claims is a national first, one of Sydney’s main sewage treatment plants will soon be supplying raw biogas into the city’s gas network when the new Malabar Biomethane Injection Project comes on stream. 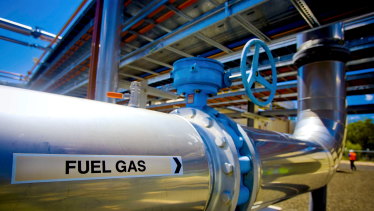 Some customers in NSW may soon be able to access so-called renewable gas sourced from one of Sydney’s main sewage treatment plants.Credit:Glenn Hunt

Energy Minister Matt Kean said the Malabar plant will be given a renewable gas certification that will unlock a voluntary market for users.

“Replacing natural gas with hydrogen or biomethane can help NSW industries meet their net-zero emissions targets, putting them ahead of the pack in low carbon global economy,” he said.

Melinda Pavey, who as Water Minister oversees Sydney Water’s Malabar Wastewater Treatment Plant that will host the plant, said the utility’s existing biomass and waste streams would turn the material into a new clean energy source.

“Sydney Water processes wastewater [at Malabar] from 1.4 million households in Sydney,” Ms Pavey said, adding the biogas was about 60 per cent methane, a potent greenhouse gas.

“From 2022, approximately 95,000 gigajoules of biomethane will be generated each year through Australia’s first biomethane-to gas project – enough to meet the gas demand of 6300 homes.”

The $14 million pilot plant is being developed by Jemena and the Australian Renewable Energy Agency, which contributed $8.1 million and $5.9 million, respectively.

The project is the first of its kind in Australia, and could lead the way for similar ventures at other wastewater treatment plants around the country, according to the NSW government.

At present, most of the biogas output is being used for electrical power generation and water heating, Jemena said. The rest of the gas is flared off.

Our Morning Edition newsletter is a curated guide to the most important and interesting stories, analysis and insights. Get it delivered to your inbox.