Russian President Vladimir Putin’s press secretary and pro-Kremlin journalists have been slapped with travel bans and financial sanctions by the Australian government, as western countries crackdown on the firehose of disinformation surrounding Russia’s illegal invasion of Ukraine.

The information war has been a key front in Putin’s bid to justify his attempted take over of Ukraine, with Moscow’s propagandists pushing the false narrative that Russia is seeking to “de-Nazify” the country. 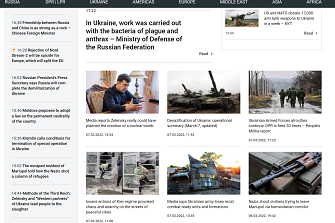 A screenshot of Russian news agency News Front’s website. The founder and financier of the site have been hit by financial and travel sanctions by the Australian government for their role in disseminating pro-Kremlin propaganda.

In total, Australia has sanctioned 10 individuals regarded by the federal government as promoters of pro-Kremlin propaganda. This list includes Putin’s spokesman Dmitry Sergeyvich Pesko, and the Kremlin’s director of information and press Maria Vladimirovna Zakharova.

Foreign Minister Marise Payne, who signed sanctions regulations naming the individuals and their role in Russia’s propaganda machine on Monday, said they had been targeted for trying to legitimise the “unprovoked, unjustified invasion” of Ukraine.

“This includes driving and disseminating false narratives about the “de-Nazification” of Ukraine, making erroneous allegations of genocide against ethnic Russians in eastern Ukraine, and promoting the recognition of the so-called Donetsk People’s Republic and Luhansk People’s Republic as independent,” Ms Payne said.

In comparison with the UK and other European countries, where many members of Russia’s elite have significant property holdings and bank accounts, Australia’s sanctions are not expected to have the same impact. Instead the sanctions are aimed at keeping Australia in lockstep with western allies, and to avoid creating financial safe havens for pro-Kremlin backers.

The list of propagandists includes eight high-profile Russian journalists, TV hosts and media identities, some of whom have already been subject to sanctions by the US and EU. Among them is Konstantin Knyrik, the 32-year-old founder and editor of online news site News Front, and Yuriy Sergeyevich Fedin, 32, who is identified by the Australian and US governments as the organisation’s financier.

News Front proclaims to “objectively” cover events in Russia, Ukraine, and Syria, among other places, so that readers can “draw conclusions about the events by themselves”. The two men were added to the US government’s sanctioned list last week, with the Treasury department identifying Newsfront as a Crimea-based disinformation and propaganda outlet that was backed by Russian security agency FSB.

Articles published on Newsfront’s website in recent days include claims that Ukraine President Volodymyr Zelensky planned to assemble a nuclear bomb, and repeatedly endorsed Putin’s characterisation of the invasion as a “special operation to denazify Ukraine”.

Yuriy Anatolyevich Prokofyev, president of online journal Strategic Culture Foundation, was also named in Australia’s sanctions list. The US State Department, in a 2020 report into Russia’s disinformation apparatus, identified the foundation as an example of “longstanding Russian tactics” to conceal direct state involvement in propaganda outlets and to create “surrogate messengers”.

“One of its core tactics is to attract authors who are Western fringe thinkers and conspiracy theorists, giving them a broader platform and obscuring the Russian origins of the journal,” the report states.

TV hosts Vladimir Rudolfovich Solovyov, Anton Vyacheslavovich Krasovsky, and Arkady Viktorovich Mamontov – all identified as “propagandists” in the federal government regulation – have also been sanctioned. Editor-in-chief of news agency Regnum, Modest Alexeyevich Kolerov is also on the list, as is Yevgeniy Nikolaevich Prilepin, writer and chair of the A Just Russia – Patriots – For Truth party.

In addition to the media personalities, the Australian government extended sanctions to six senior Russian military commanders it identified as responsible for implementing naval, ground and air attacks on Ukraine. It also designated the Russian Armed Forces, which Ms Payne said would have the effect of prohibiting the export of goods from Australia to all Russian military end users.