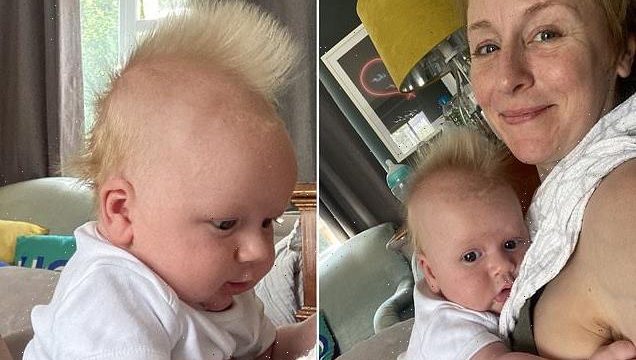 Pint-sized punk! Baby, 10 weeks, has a natural mohawk that started sticking up when he was just a few days old

This six-week-old baby is already a pint-sized punk rocker – as he was born with a natural perfect mohawk that leaves strangers stunned in the street.

Nicolle Green, 41, from Lewes, East Sussex, was stunned when at just a few days old Emerson Blake Nutley’s blonde locks stuck up in a natural mohawk, quipping it looks as though he’s been electrocuted.

Since then, the pint-sized punk’s locks have gotten even longer but continue to defy gravity and stand up on end in the rebellious style.

Cute photos of Emerson show him sporting the shocking do, and in one snap the banana baby grow-clad tot even appears to strike ‘the sign of horns’ hand sign – completing his punk persona.

The mass of blonde hair causes the home organiser business owner to be stopped every time she leaves the house with admiring passers-by flocking around her pram commenting on his striking ‘do. 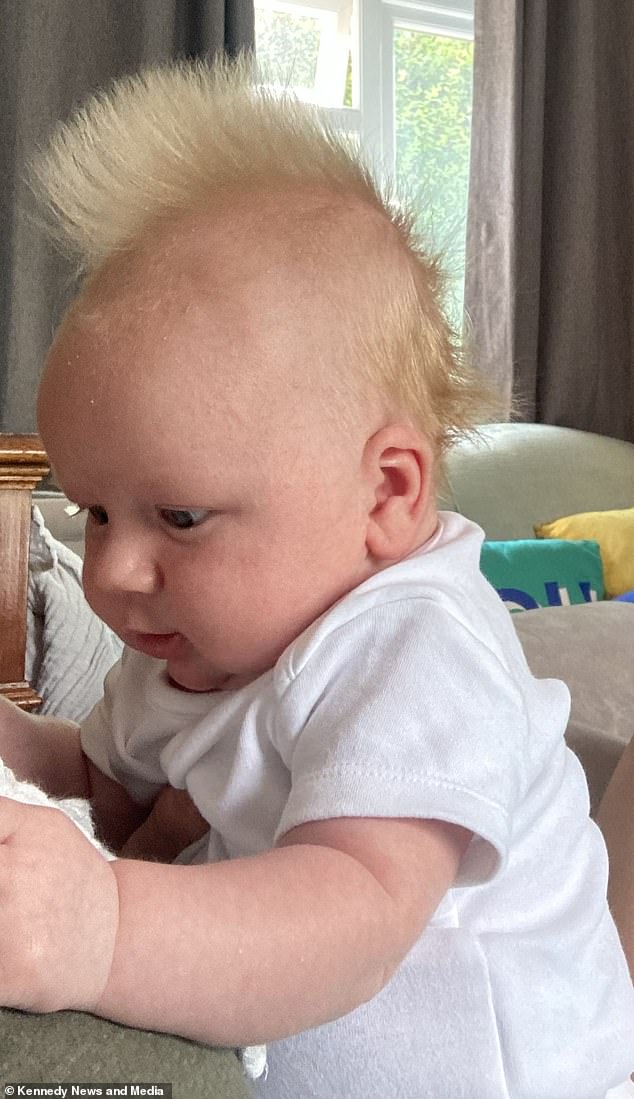 Six-week-old Emerson Blake Nutley, from Lewes, East Sussex, was born with a natural perfect mohawk that makes him look like a pint-sized punk

Nicolle Green, 41, from Lewes, East Sussex, was stunned when at just a few days old Emerson Blake Nutley’s blonde locks stuck up in a natural mohawk, quipping it looks as though he’s been electrocuted

And his mum says that she hopes Emerson Blake will live up his unusual name and natural rebellious hair by becoming an artist or rock star.

Nicolle, from Lewes, East Sussex, said: ‘It’s just the middle bit on the top of his head that sticks up. It’s quite thick at the back, especially around the bottom of his neck.

‘It doesn’t stick up anywhere else, it looks like he’s been electrocuted.

‘He looks like an 80s punk rocker with the mohawk. I think if it gets longer we’ll be able to do a little ponytail to go with the mohican. 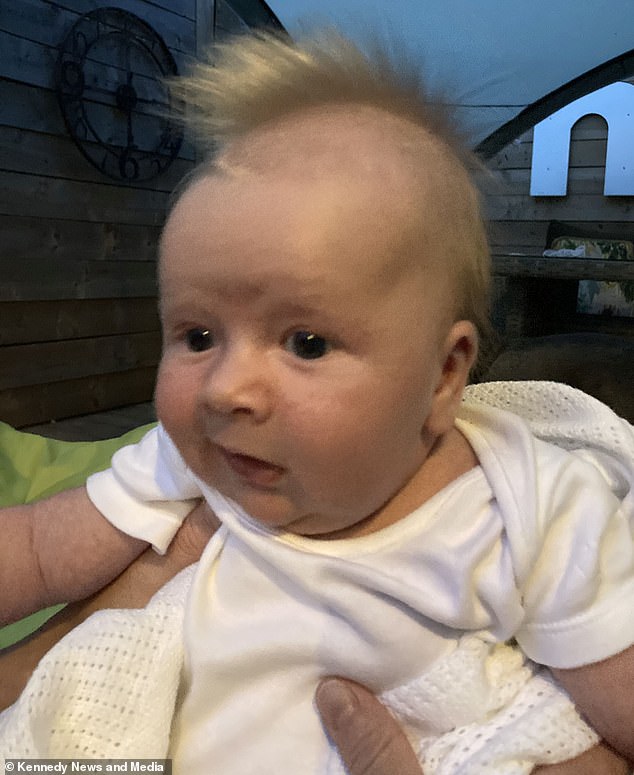 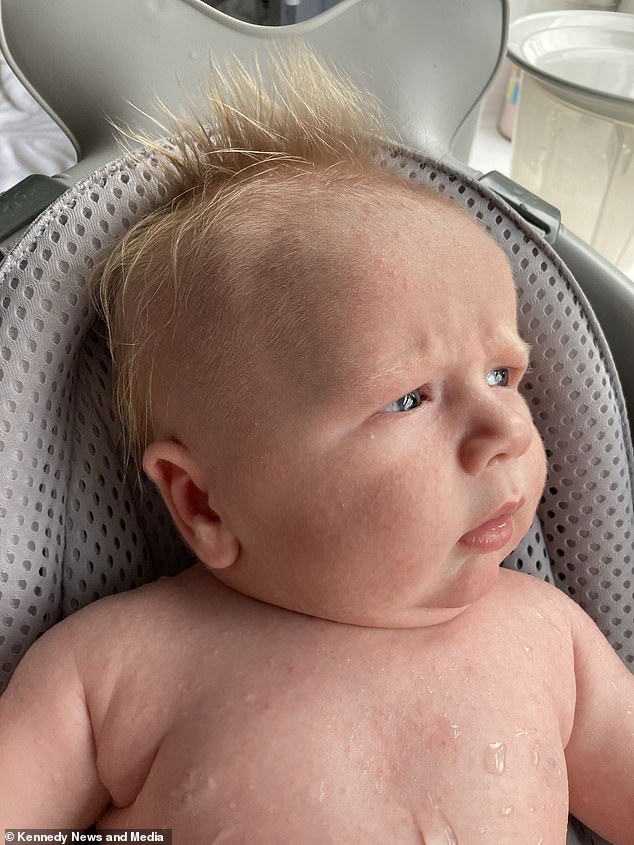 Emerson was born with a full head of blonde hair, and even when it’s been washed, his mohawk still sticks up

‘I went to a cafe recently and as soon as I got him out of the pushchair to feed him everyone came over and said, “Oh my gosh look at his hair”.

‘It happens on a daily basis when I’m out and about with him, it’s constant.

‘It’s like leaving the house with a really cute puppy, you know how everyone stops you in the street?

‘As soon as they peer into the pram they start ‘oh what a cute baby’ and then you push the hood back and they see the hair and then you have to talk to them about it for ten minutes.

‘He gets a lot of attention when we go out, it’s almost like going out with a celebrity.’

The mum-of-three says the tot, who was born on June 21st weighing 8lbs 14oz, was born with a full head of hair and after a few days it started sticking up. 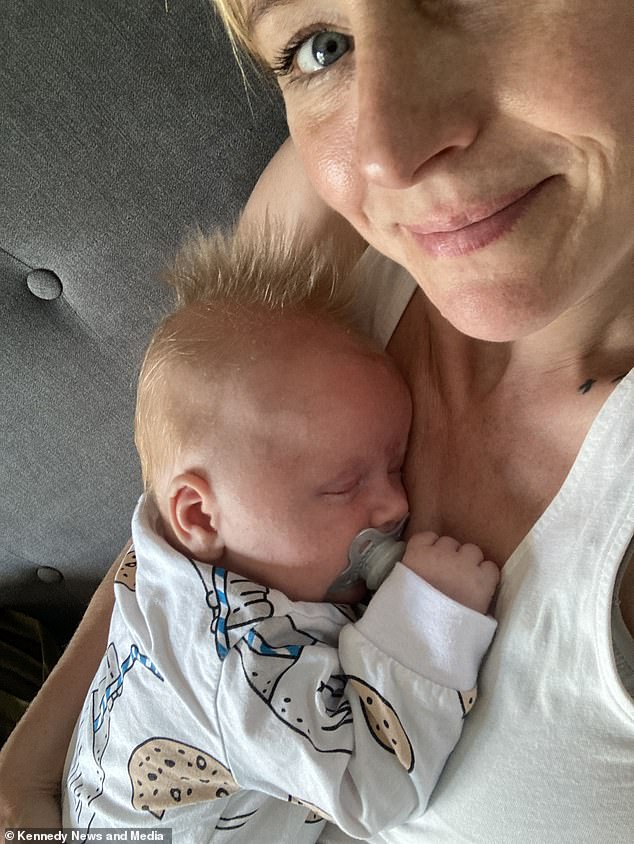 Now, regardless of what she does with Emerson’s hair, including wetting, washing and brushing it – it sticks up in the air.

But it appears the tiny tot takes after landscape gardener dad Tom Nutley, 40, who Nicolle describes as ‘the other one with the crazy hair’ who also sports spiky locks.

But unlike his hirsuite dad, Emerson’s hair style is au naturale.

Nicolle said: ‘He was born with a full head of hair. It was sticking up within a few days.

‘One of the first photos we took of him when we got home, his hair was shorter but it was sticking up. 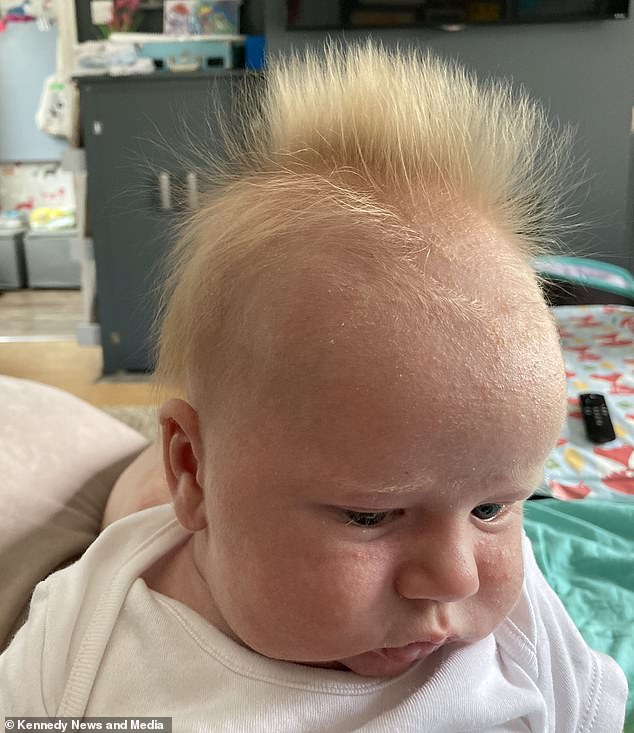 Nicole hopes that with a funky hairstlye and the name Emerson, her son will grow up to do something ‘cool’ 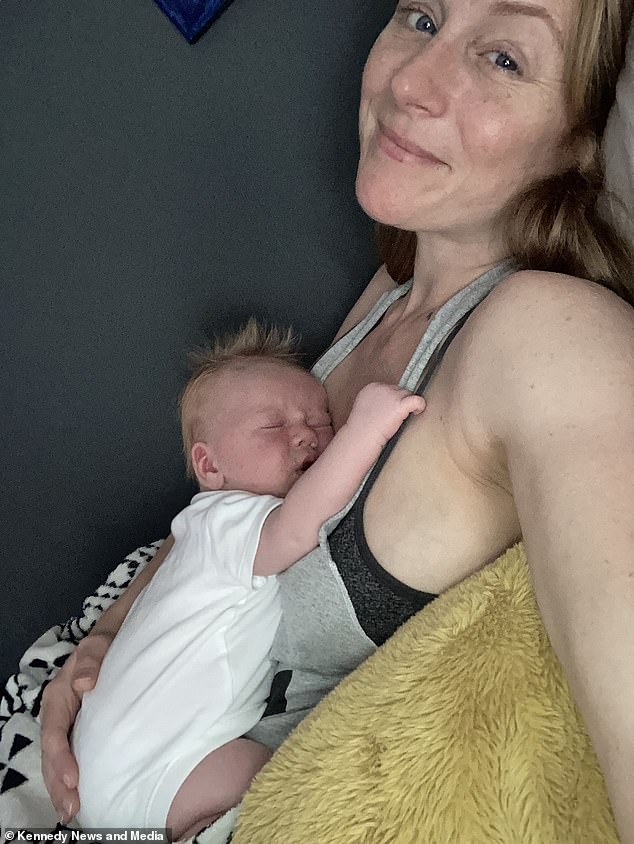 ‘Tom’s hair is spiky by design. It doesn’t look like that when he wakes up in the morning, he has to put his ten tonnes of gel on it.

‘There’s no styling involved [with Emerson’s]. His hair is like this from first thing in the morning, it never lays flat.

‘You brush it down with your hand and it just springs back up again.

‘It only lays flat when it’s soaking wet, the second he’s out of the bath and it sticks up again.’ 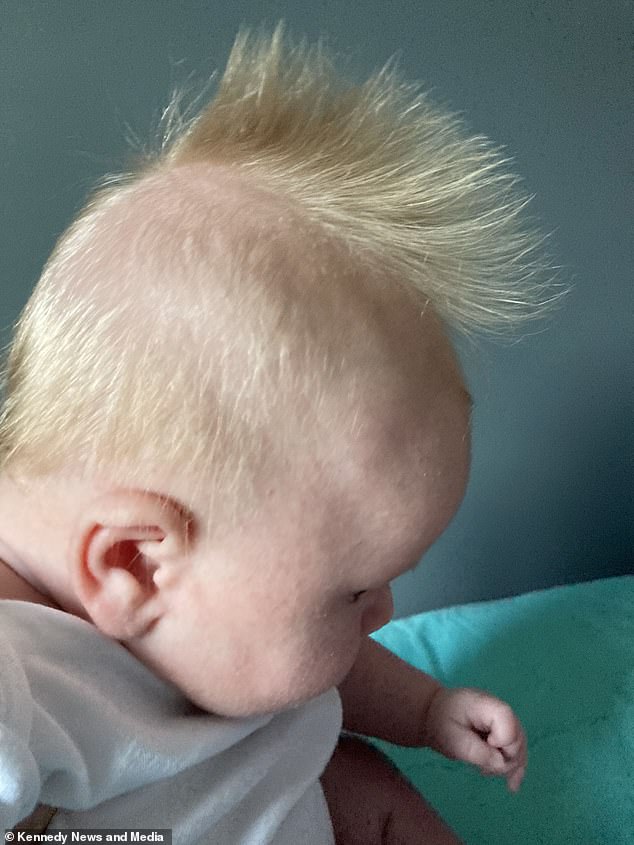 Emerson’s impressive hairstyle: His mother siad that no matter what she does, his hair refuses to lie flat

‘Family and friends love his hair, every photo I put on social media they comment on his hair.

‘I wonder when it’s going to lay flat, I hope it won’t for a while because it’s very cute and it suits him.

‘I really hope he will grow into his hair style and be a bit rebellious. With a name like Emerson Blake I’m thinking rock star, artist, something really cool.’