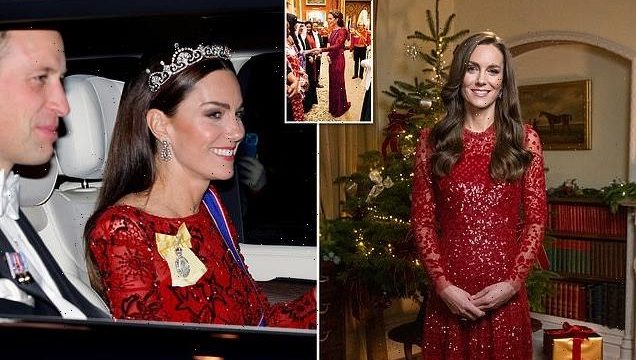 Kate goes on the front foot: Princess of Wales wows in a dazzling red dress ahead of royal carol concert – just days after stunning in Jenny Packham gown as she shows no sign of hiding away despite Harry and Meghan Netflix furore

The Princess of Wales has made a dazzling statement in a red sequin-embroidered gown – putting aside the turbulence of Meghan and Harry’s Netflix documentary ahead of her royal Christmas carol concert next week.

Kate, 40, will host the service on Thursday in Her late Majesty Queen Elizabeth II’s honour, in what will be her first Christmas Carol service since she was given the Princess of Wales title.

In a newly released palace portrait, the princess wowed in a show-stopping sequin gown, with sheer embroidered sleeves and a cinched waistline.

She wore her hair in loose waves and kept her makeup fresh with a glossy nude lip, letting the bold dress take centre stage.

In the background, the Christmas tree was lit with fairy lights, draped with golden and red bows and baubles.

The service will recognise the selfless efforts of communities throughout the UK, highlighting the importance of coming together to support one another.

The new picture comes after it was revealed her husband, the Prince of Wales, is unlikely to ever make up with his estranged brother after his betrayal in the Netflix documentary.

William, 40, is said to be angry about the disrespect he feels Harry showed to their grandmother when she was alive during the Megxit saga.

And sources believe the bombshell documentary – which it is understood the heir to the throne has not watched, but is likely to do so at some point – will do little to change his mind. 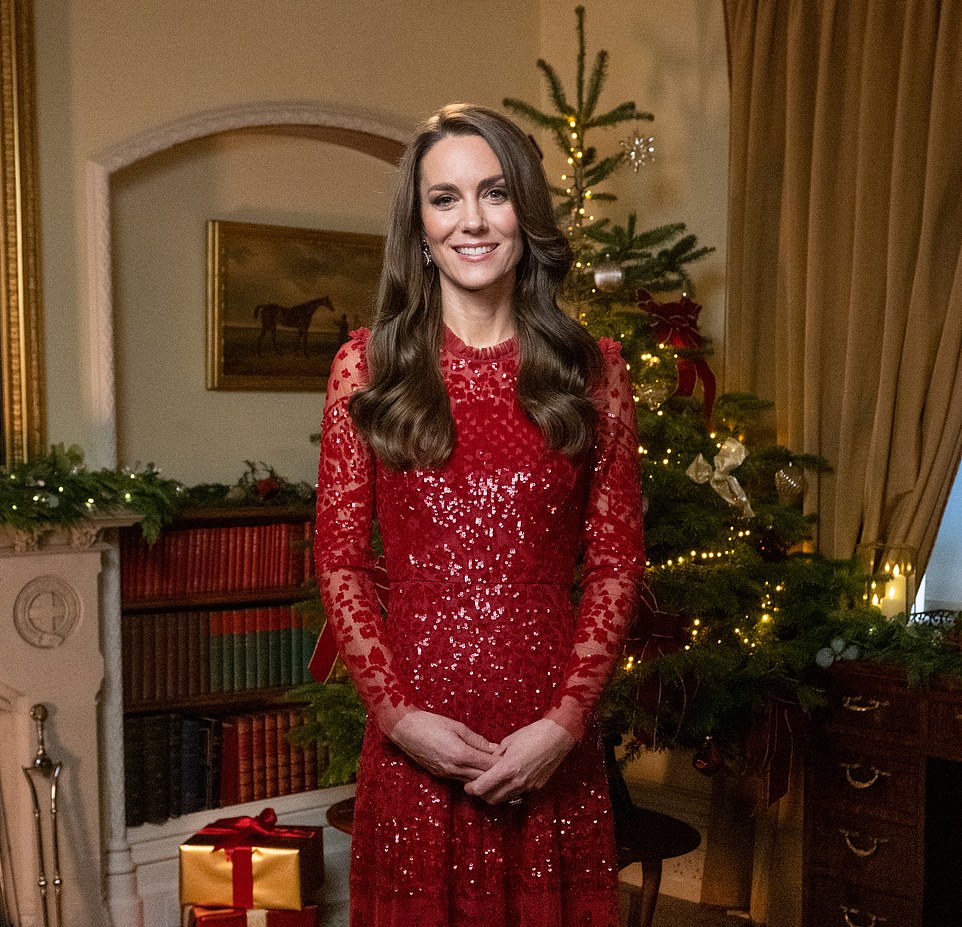 In a newly released palace portrait, the princess wowed in a show-stopping sequin gown, with sheer sleeves embroidered with sequins and a cinched waistline

Harry and Meghan described Britain as racist and appeared to take aim at the ‘formality’ of the royal family – even behind closed doors.

Meghan said: ‘Even when Will and Kate came over and I was meeting her for the first time I remember I was in ripped jeans, I was barefoot. Like I was a hugger, I have always been a hugger I didn’t realise that is really jarring for a lot of Brits.’

The Prince and Princess of Wales have reportedly not yet watched the documentary, nor have they addressed any of the stories the Sussexes shared in the first three episodes.

While nothing particularly salacious was revealed, William is said to b  distrustful of Harry’s motives given he has a book coming out early next year.

A friend said: ‘The prince is a very private man and what Harry is doing is the anathema of everything he believes. On that alone, many believe it is unlikely he will ever be able to repair his relationship with them. Too much water has gone under the bridge.’

But royal insiders say the firm are particularly upset with any criticism of Queen Elizabeth and her Commonwealth legacy, which was dismissed as ‘Empire 2.0’.

In the first three episodes of the six-part series, Harry has accused the royals of having a ‘huge level of unconscious bias’ and colluding with a media that wanted to ‘destroy’ Meghan.

The Princess of Wales has not addressed the comments. Instead, she got on with royal business.

The upcoming carol service, spearheaded by the Princess, will combine both traditional and modern elements, reaching people of all faiths and none.

It is also set to pay tribute to the late Queen, and will see Westminster Abbey flooded with festive decorations as the world renowned Abbey Choir sing carols and special guests deliver special readings.

The King and Queen Consort will join the Princess of Wales for the service, which is taking place on the same day as the second instalment of Harry and Meghan’s documentary airs on Netflix.

Kensington Palace confirmed that ‘The New Fab Four’ as they have been dubbed will attend the ceremony together. 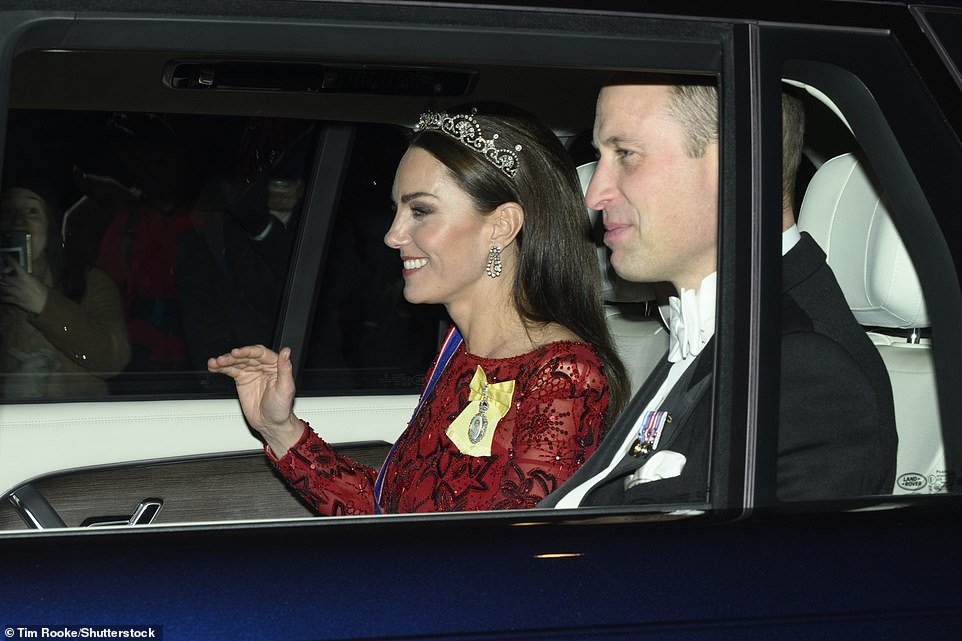 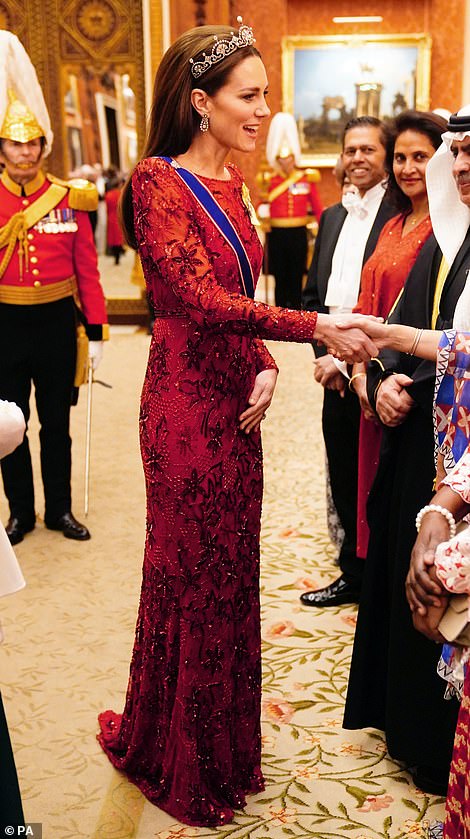 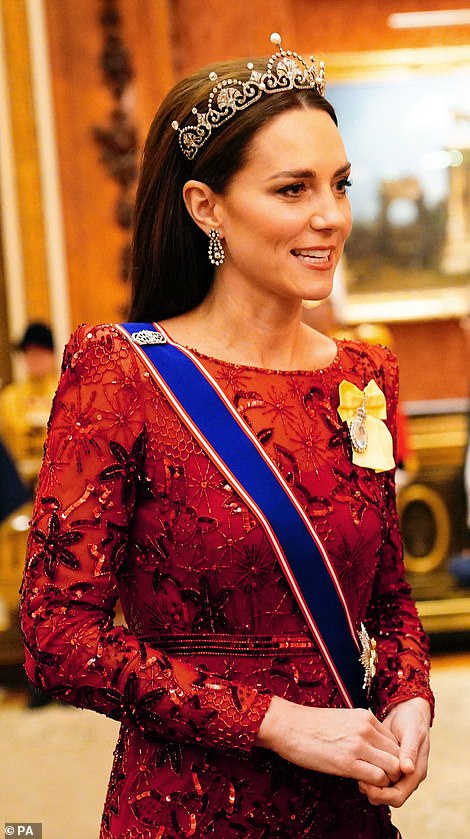 Last year, the Princess’s event was attended by her husband Prince William, as well as Zara and Mike Tindall and Sophie Wessex.

Princesses Beatrice and Eugenie were also in attendance and were pictured singing along to the carols and hymns.

It was also a family affair for the Princess, with her parents Carole and Michael Middleton, as well as her siblings James and Pippa, also in attendance.

Kate’s latest look marks the second time in just a week she’s stepped out in a dazzling red gown.

For the annual Diplomatic Corps reception on December 6, the Princess of Wales wore a gem-embellished scarlet Jenny Packham gown and the Lotus Flower Tiara alongside her husband, King Charles, 74, and Queen Consort Camilla, 75.

She showed off the Queen’s Diamond Frame earrings, which she teamed with Queen Elizabeth II’s Royal Family Order and her blue Royal Victorian Order sash.

The Prince and Princess of Wales have spent the week focusing on parenting duties and sticking to ‘business as usual’ as royal watchers around the world eagerly awaited Netflix’s ‘global special’ on the Sussexes.

The duke and duchess signed lucrative deals, thought to be worth more than £100 million, with Netflix and Spotify after quitting as working royals.

An insider said earlier this week the royals are reluctant to engage in a tit-for-tat battle over the series.

In the first half of the series, which was released this week, Meghan recalled her first ever encounter with Prince William and Princess Kate. 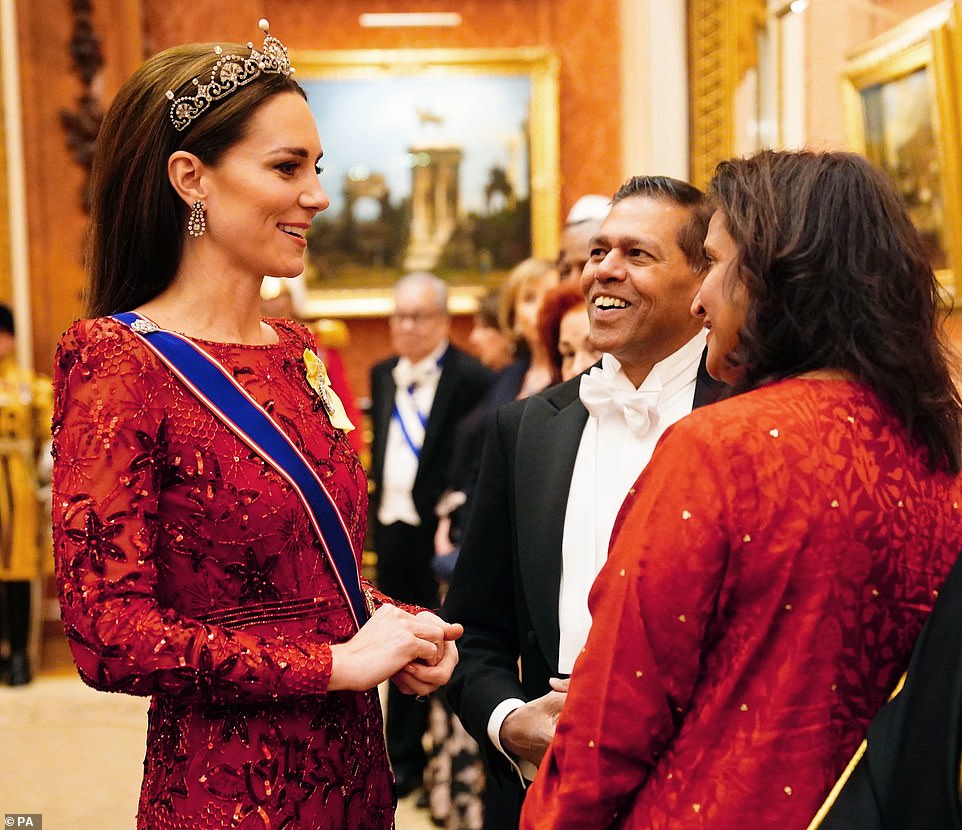 Radiant: A glamorous Kate speaks to guests at the Diplomatic Corps reception at Buckingham Palace this evening 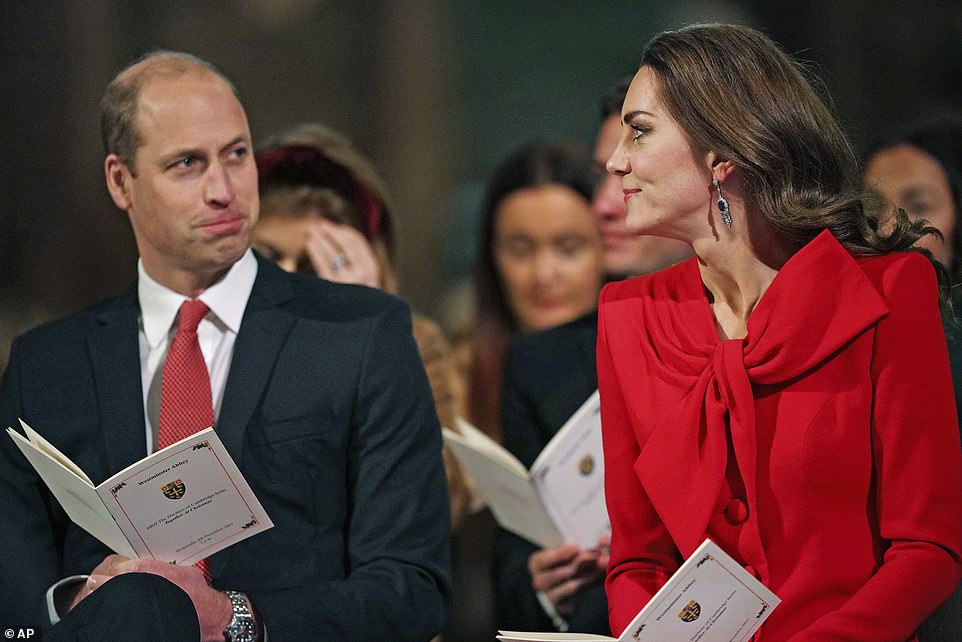 The Prince and Princess of Wales, pictured at last year’s event at Westminster Abbey, which was also broadcast on Christmas Eve

The Duchess of Sussex, 41, said she did not know the ‘formality’ carries through behind closed doors and that she is a ‘hugger’ – which she did not realise was ‘jarring for some Brits’.

She admitted she was ‘surprised’ there is a ‘forward facing way of being and then you close the door’.

‘I started to understand that the formality on the outside carried through on the inside, that there is a forward facing way of being and then you close the door and think ‘OK we can relax now’. But that formality carries over on both sides and that was surprising to me.’

Harry has accused the royals of having a ‘huge level of unconscious bias’ and colluding with a media that wanted to ‘destroy’ Meghan, as well as slighting his father and brother about their choices of bride. 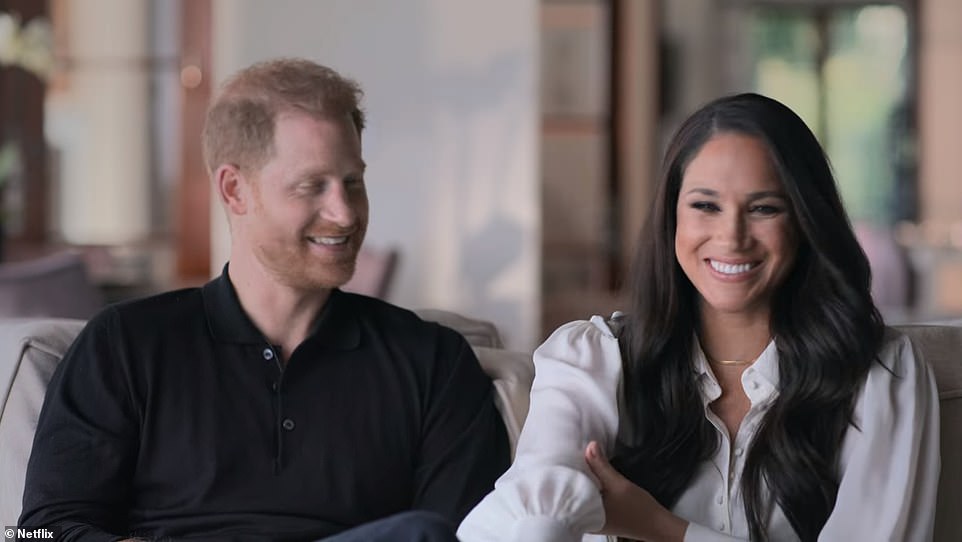 Prince Harry’s claim that his decision to marry Meghan set him apart from his family because it was ‘from his heart’ and not because she ‘would fit the mould’ is ‘simply not true’, a royal expert has insisted 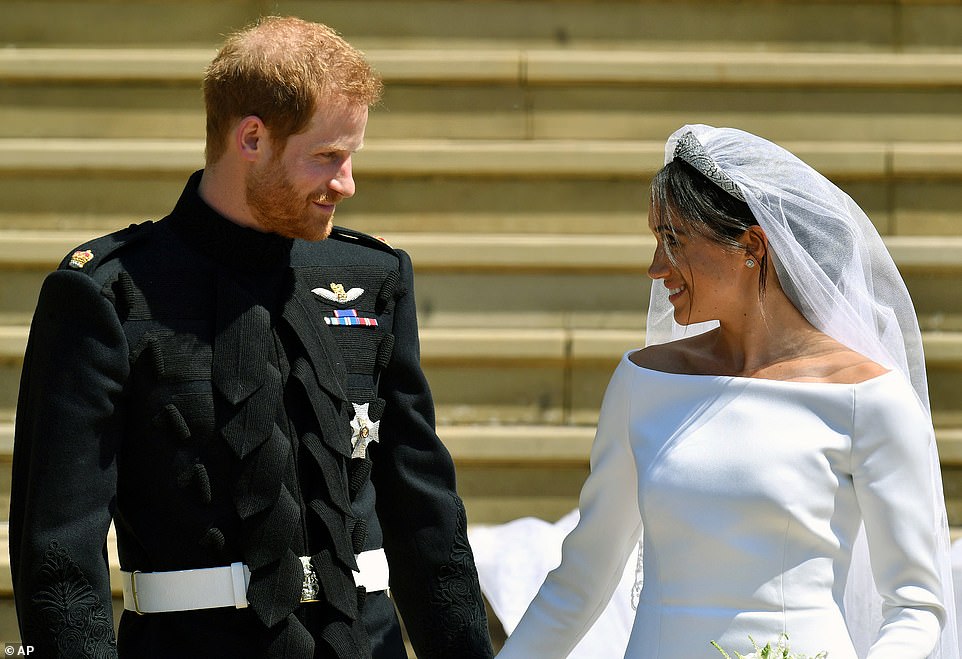 He said his decision to marry Meghan set him apart from his family because it was ‘from his heart’ and not because she ‘would fit the mould’.

‘I think for so many people in the family, especially obviously the men, there can be a temptation or an urge to marry someone who would fit the mould as opposed to somebody who you perhaps are destined to be with.

‘The difference between making decisions with your head, or your heart. And my mum certainly made most of her decisions – if not all of them – from her heart. And I am my mother’s son.’

The comments have been perceived as a slight against his brother, while others say it’s clearly an observation on his father’s unhappy marriage to Diana before he went on to marry Camilla, who is now Queen Consort.

Elsewhere in the highly anticipated documentary:

The couple revealed what really happened on their first date

Meghan lifts the lid on her ‘amazing’ first Christmas at Sandringham

Netflix show is branded a ‘TV bomb’ for the royal family 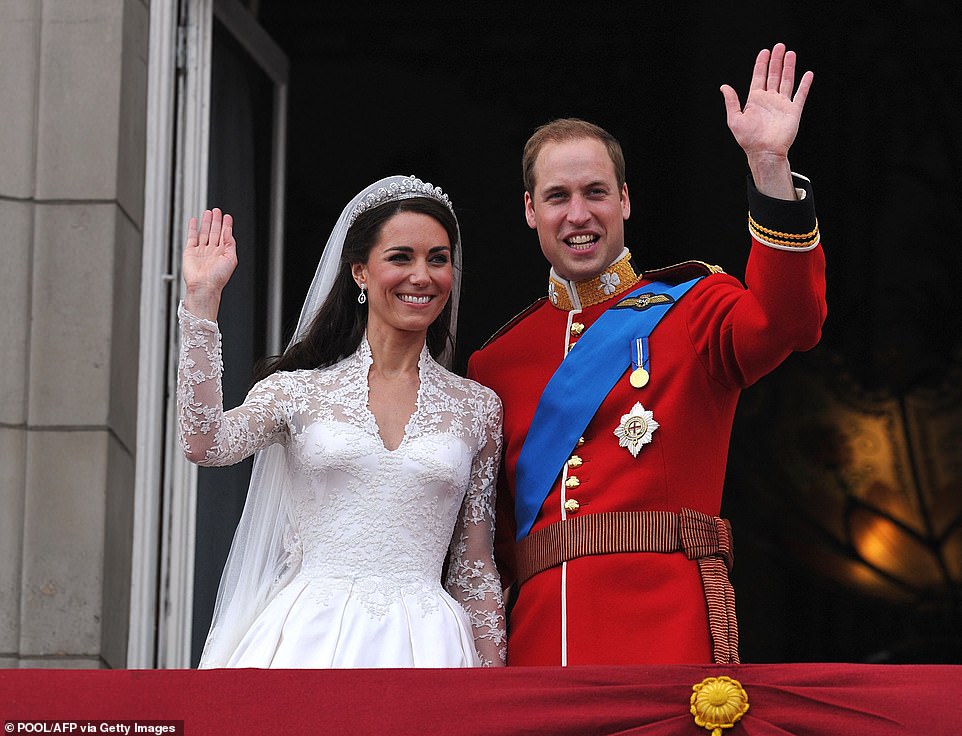 William and Kate tied the knot in 2011 after nearly a decade together. Above: The pair on the Buckingham Palace balcony after their wedding 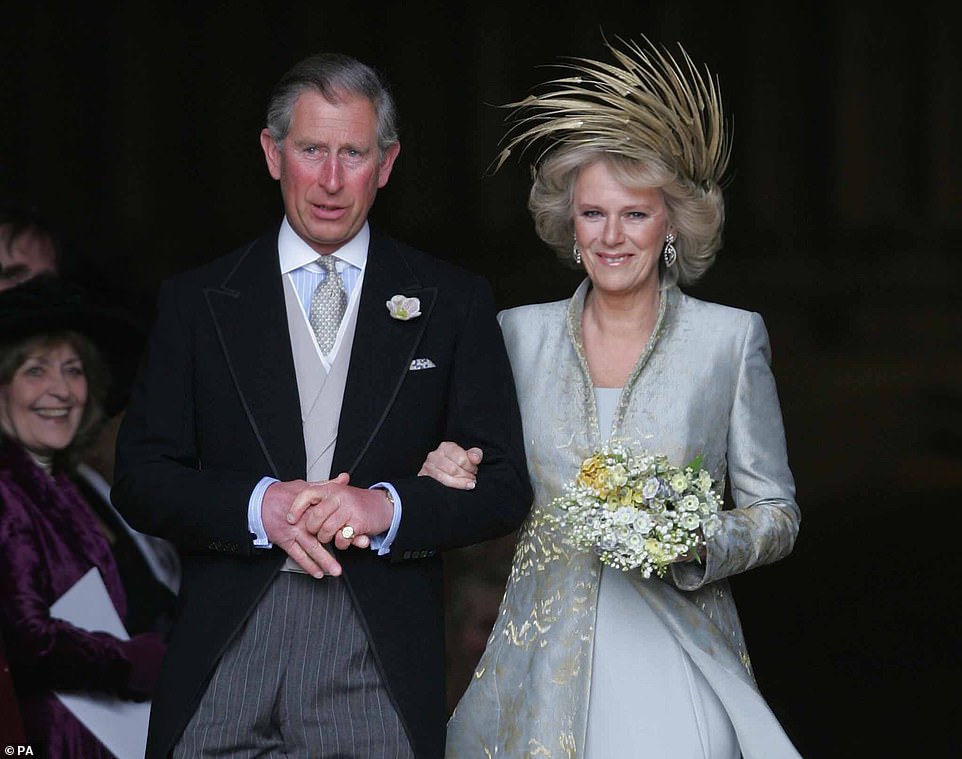 Whilst still married to Diana, Charles is known to have been romantically involved with Camilla, whom he went on to tie the knot with in 2005 (pictured)