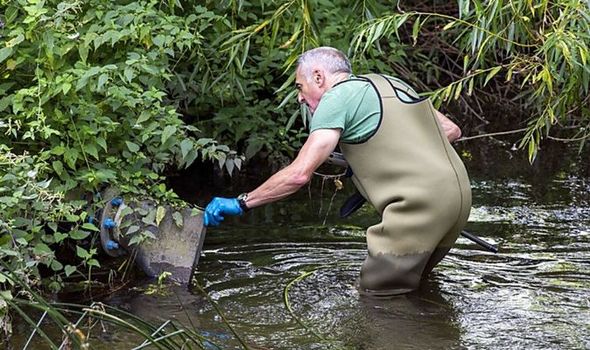 As recently as 2010 ducks sat on the clear water of his beloved local river – with healthy green weeds growing beneath the surface. But today that is just a memory, compared to the muddy brown murk of the Windrush, in Oxfordshire.

Untreated sewage is being spilled into the river by Thames Water.

The company has admitted this filth pouring in for 3,644 hours on 228 occasions from four of the sewage works along the river.

Mr Smith, 63, who founded Windrush Against Sewage Pollution, said: “Plant-life is being choked out of existence by sewage fungus and algae.

“Some species of fish such as barbel and grayling are struggling to breed.

“But it’s more profitable to pollute than to act sustainably.”

He warned things will get worse. He said: “Our rivers are in a dismal state. They are in a state of emergency as countless new houses are connected to an already failing sewage system.”

What is happening where you live? Find out by adding your postcode or visit InYourArea

Mr Smith first got involved when he saw the decline in the Windrush and was disappointed by the response from the government body supposed to protect rivers.

He said: “The Environment Agency has been debilitated by Defra which had made it impossible for it to be effective and the water industry exploits this.

“Polluting is profitable. That has to come to an end.”

A Water Quality Analysis Simulation Program showed that 95 per cent of illegal sewage spills to watercourses from Thames Water’s sewage treatment works may go unrecorded by the Environment Agency.

A spokeswoman for the water company said: “It’s our view that discharges of untreated sewage are simply unacceptable, even when they are legally permitted.”

The number of rivers in good ecological status in England has fallen to a dismal 16 per cent.

The target was for all of them to be in good status by 2015 which was put back to 75 per cent by 2027. Now even that low target is being abandoned by embarrassed environmental regulators.

It may be a coincidence but in 2009 our water companies, which handle the sewage network, were given the right to monitor themselves and their pollution.

And today our fun water activities risk us getting sick from bacteria in someone else’s sewage, dumped by a multi-million pound water company saving money.

Corner cutting which should have been stamped on at the beginning, crept in and criminal convictions for pollution started to appear on the company books.

It’s shocking but Thames Water, as an example, has 180 criminal convictions. The fines for criminal pollution were laughable for many years, in the low thousands.

Even what sound like high figures now of a £20million fine for Thames Water in 2017 and £90million for Southern Water this year don’t stop the offending as it is still cheaper to pay up occasionally than fix the broken infrastructure.

Every winter, people all over the country are unable to use their sinks and toilets for long periods because it is cheaper for the water industry to use tankers to move sewage around than fix the failed network. Pollution in homes, gardens, streets, rivers and seas mostly goes unchallenged.

The new Environment Act will make things worse. Its provisions will not stop sewage pollution. Dodging the law is business as usual for the water companies.

The emerging public health threat needs the Government to act now. More and more people are getting sick from sewage and as resistant bacteria develop at sewage works, it is only a matter of time before someone dies from it.

Do we really have to wait until then until something is done?