A million Australian children will be hospitalised at least once in their life for heat stress and the Great Barrier Reef will die along with the east coast’s eucalyptus forests should climate change not be halted, a federal court judge has said in a case brought against Environment Minister Sussan Ley by eight school students.

The court found that Ms Ley had a duty of care to protect them and the environment from the impacts of climate change, but dismissed their application to have her blocked by injunction from granting an extension to a coal mine as a result. 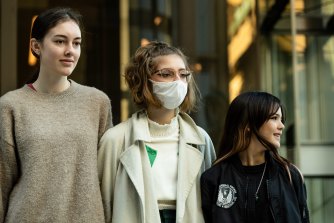 Laura Kirwan, 17, Ava Princi, 17 and Izzy Raj-Seppings, 14, who are among the eight students who sought to have Environment Minister Sussan Ley blocked from approving a coal mine due to climate impacts.

“Those potential harms may fairly be described as catastrophic, particularly should global average surface temperatures rise to and exceed 3 degrees beyond the pre-industrial level,” the judge found.

The children, who met through the School Strike for Climate movement, had argued that due to Ms Ley’s duty of care to them and other children the court should grant an injunction preventing her from approving an extension to the Vickery coal mine owned by Whitehaven Coal and located near Gunnedah in NSW.

The federal court judge accepted evidence that climate change was caused by carbon dioxide emissions, that it was probably already unlikely to be halted without temporarily passing the target of 1.5 degrees, and that if allowed to continue above 2 degrees unchecked it would cause tipping points to be triggered leading to average global surface temperatures to rise by four degrees by the end of the century, unleashing massive environmental destruction.

“Many thousands will suffer premature death from heat-stress or bushfire smoke. Substantial economic loss and property damage will be experienced,” Justice Mordecai Bromberg wrote in a summary of his judgement. 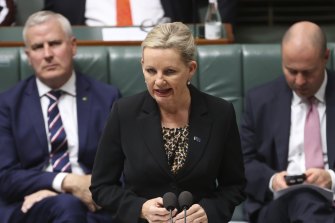 Minister for the Environment Sussan Ley was sued by children arguing she had a duty of care to them. Credit:Alex Ellinghausen

The lawyer representing the students, David Barnden, described the finding as a world-first victory.

He said that the judge accepted the evidence about the causes and impacts of climate change was a “step change” in the law.

“This is an amazing recognition that people in power must not harm younger people by their decisions,” he said.

After the hearing, one of the students, 17-year-old Ava Princi, said she was relieved and thrilled by the judgement.

“There will be further submissions on what the duty of care means for the minister’s decision and the mine.

“I am thrilled because this is a landmark decision. This is the first time a court of law, anywhere in the world, has recognised that a government minister has a duty of care to protect young people from the catastrophic harms of climate change.

“My future – and the future of all young people – depends on Australia stepping away from fossil fuel projects and joining the world in taking decisive climate action.”

“Our consistent position has been that this legal claim was without merit. The company sees a continuing role for high quality coal in contributing to global CO2 emissions reduction efforts while simultaneously supporting economic development in our near region,” a Whitehaven spokesman said in a statement.

A spokesman for Ms Ley said she would consider the judgement.

Our Morning Edition newsletter is a curated guide to the most important and interesting stories, analysis and insights. Get it delivered to your inbox.