Constabularies have noticed a rise in pets being unattended in vehicles during the 30C heatwave and officers have, in some cases, broken windows to help the dogs. Kent Police, for example, issued a reminder on Facebook, in which the force said dogs suffer hugely in the heat – and it can cause their deaths.

The post, liked by hundreds of people, read: “Never leave your dog unattended in a car in warm weather. This appears to be quite commonplace in supermarket car parks, where the owner thinks they will be a matter of minutes but inevitably ends up taking longer.

“Leaving your dog in a car on a hot day can be fatal and officers will not hesitate to break a car window to rescue a dog suffering in the heat.”

Temperatures are expected to rise again potentially to a staggering 33C on Sunday, which some forecasters believe will be the hottest day on record in the UK.

According to the Met Office, “substantial changes in working practices and daily routines” are likely to be needed, while “delays on roads and road closures” as well as “delays and cancellations to rail and air travel” are possible this weekend.

In the face of expected transport disruption as a result of the heatwave, Network Rail said it had introduced temporary speed restrictions at the hottest times on parts of the network, including in Essex, to keep trains running and mitigate the effects of rails expanding in the heat, which can cause buckling. 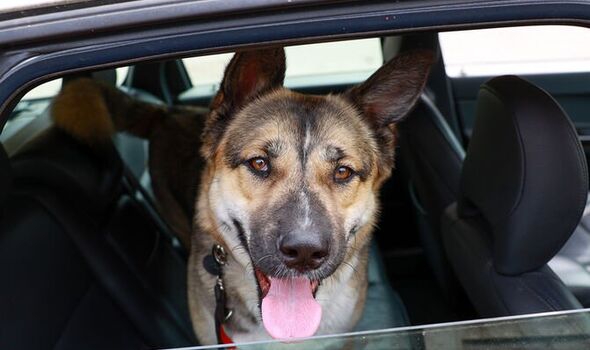 Dog owners have also been warned that they should keep an eye out for their pooch licking their paws.

This is because dogs will often lick their paws if they are in pain from paw burn.

Dogs are at risk in hot temperatures because they are not able to cool down through sweating, as humans do – and breeds with long coats are especially prone to overheating.