Absolute, insane joy. That’s how Evelyn Araluen felt on hearing she’d won the 2022 Stella Prize for her book of poetry Dropbear. “I just started squealing and ran around the house like a child who’d just found out about the Easter Bunny or something,” she says. 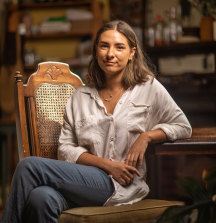 It’s a particularly notable win given it’s the first time poetry has been eligible for the $50,000 prize. “It’s been a really unprecedented response and I’ve been very surprised and honoured that as many people have liked my strange little book,” Araluen said. “I am now a tiny bit terrified about what’s next.”

Established in 2013, the Stella Prize is designed to champion work by Australian women, in response to historical gender bias in literary prizes. The list of previous winners is a who-who’s of our top writers, fiction and non-fiction, including Charlotte Wood and Alexis Wright.

Bundjalung-born and raised in Dharug country, Araluen says Dropbear was written over several years in response to what she calls settler colonial literature. It’s the stuff Australian children are raised on including Snugglepot and Cuddlepie, Dot and the Kangaroo and Blinky Bill. She argues there’s been a resurgence of this material recently, which has shocked her, given how problematic she considers it. 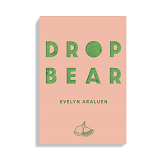 “It’s designed around themes of anti-Australiana, to be in dialogue with ideas of cultural cringe and the kitsch and the ironic and the uncanny in Australia,” she says. “Particularly thinking about the ways as an Aboriginal person I’ve inherited that literary culture, however complicatedly, with however much resistance is to be expected.”

Her work also speaks to other aspects of Australian culture such as the poetry of Banjo Patterson, films such asWake In Fright and Nick Cave’s music.

Araluen is studying her PhD in contemporary Aboriginal literature – focussing on work by Alexis Wright, Melissa Lucashenko, Ellen van Neerven and Tara June Winch – and works part-time as an academic at Deakin University. She is also co-editor of the literary journal Overland.

“The good thing about the Stella Prize is I can go down to two part-time jobs and focus on the creative writing,” she says.

Despite having received a litany of awards, including the Nakata Brophy Prize for Young Indigenous Writers, the Judith Wright Poetry Prize, a Wheeler Centre Next Chapter Fellowship and a Neilma Sidney Literary Travel Fund grant, Araluen doesn’t see herself as a career writer. “My own writing is something I do right now and I do in the time that I’ve got available. I’m not one of those people who expects that I will always have something to say. I’ve got a few things to say, I’ll say them and then see if I have more to say.”

Now in its 10th year, the Stella Prize has achieved its financial goal of $3 million to endow the prize in perpetuity. That was made possible through the Stella Forever Fund, set up in 2016 with a campaign led by patrons Paula McLean, who donated $1 million, and Ellen Koshland; it is one of Australia’s most ambitious female-led philanthropy campaigns to date. Since its inception, the Stella has invested more than half a million dollars in women’s writing, through the distribution of prize money.

Even now, Araluen says she gets “very nervous about calling myself any kind of writer. Whenever I tell people I’m a poet, it creates a strange energy. Most of the time they don’t just believe you, or their version of being a poet is you sit in a dark room and scribble out work and no one ever reads it. People already have a perception about writing and writers anyway, that they’re not social, which is not true. And poetry is considered such a deviation from normal social behaviour … so unless I know people know about it, I just say I work in books. It’s not a lie but it’s definitely an evasion of the question.”