Environment Minister Tanya Plibersek may be asked to approve up to 140 developments that could worsen the koala extinction crisis, in a test of the government’s pledge to halt the decimation of native species.

Habitat destruction triggered by urban and agricultural expansion is a key threat to the survival of the Australian marsupial, listed as endangered species in NSW and Queensland in February following a series of devastating losses from bushfires, feral predators and vast land clearing. 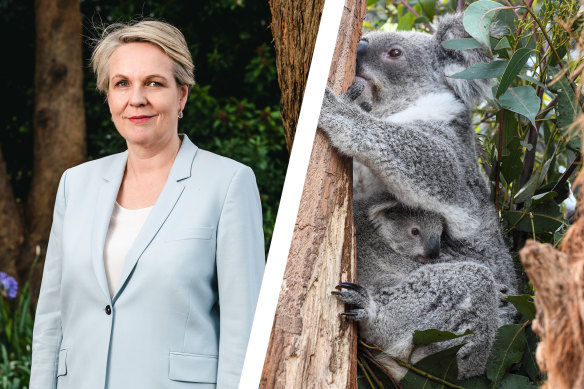 Environment Minister Tanya Plibersek may be asked to approve up to 140 developments that could worsen the koala extinction crisis.Credit:James Brickwood/Peter Rae

New documents tabled with the Australian parliament in response to a query by Greens senator Sarah Hanson-Young show the federal Environment Department is assessing 140 proposals with the potential to have a detrimental impact on koalas.

Plibersek is the ultimate decision maker on developments that affect threatened species, and will be required to approve any projects that progress to the final stages of the government’s complex assessment process.

The volume of potential approvals sets up a test of the government’s commitment to animal protection, which Hanson-Young claimed lacked urgency given the scale of the threat to koalas.

“We can’t be waiting until after the next election for koalas and their homes to be saved, we need action from the minister now if Australia is serious about meeting the zero extinction target,” she said.

A NSW government report from 2020 found koalas would be extinct across the state by 2050 without an intervention to stop habitat loss.

State governments are the primary authority for planning approvals and environmental management. However, any development proposal that could impact matters of national environmental significance, including threatened species such as koalas, must be assessed by the federal government under the Environment Protection Biodiversity Conservation Act.

Plibersek has said she will add new wildlife protections to the national laws and promised to release draft legislation by the middle of next year, but the details are yet to be finalised and there is no deadline to complete the changes.

A spokesperson for Plibersek said the government understood the urgent need for action and was already responding, including via a $75 million investment in habitat conservation and reforming federal environmental protections to boost oversight of development approvals.

“A key element of this reform is the establishment of an Environment Protection Agency which will make independent decisions on proposed developments,” the spokesperson said.

“The new laws to be introduced into the parliament in 2023 will deliver better environmental protection as well as speed up decisions and make it easier for companies to do the right thing.”

The federal government has also started working with NSW and Queensland governments on a “traffic light” system for development assessments, with green zones where projects would be exempted from national laws and red zones where development would be banned. 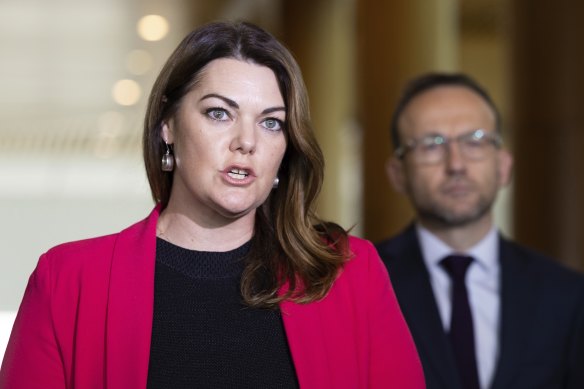 Greens senator Sarah Hanson-Young says the Labor government is showing a lack of urgency when it comes to koala protection.Credit:Alex Ellinghausen

It is estimated as many as one-third of NSW’s koalas – about 10,000 animals – perished in the 2019-20 Black Summer bushfires and preceding drought, while Queensland’s population shrunk by about 50 per cent in the past decade.

Experts have said the new planning regime could increase the impact of development on threatened species unless the proposed national environment standards deliver greater protections for habitat loss.

Australia leads the world in mammal extinctions, and since European settlement about 100 unique species have been wiped off the planet. The rate of loss is as bad in Australia as anywhere in the world and has not slowed over the past 200 years.

Humane Society International head of campaigns Nicola Beynon said the Albanese government must rule out further habitat losses and reverse the trend of dwindling koala populations in NSW and Queensland.

“The national threatened species standard likely won’t be in place until sometime later next year. But if we’re going to stop extinctions we need to draw that line in the sand now, not wait for the standard to be agreed by parliament,” Beynon said.

Get to the heart of what’s happening with climate change and the environment. Our fortnightly Environment newsletter brings you the news, the issues and the solutions. Sign up here.