When Baz Luhrmann was living in New York, shortly before coming home to Australia to shoot a biopic of Elvis Presley, there was one question that visitors would regularly ask.

“Friends would come to town and say ‘can you get me into Moulin Rouge?,” he said. “I’d say ‘probably. I’m not sure’. And I wasn’t kidding.” 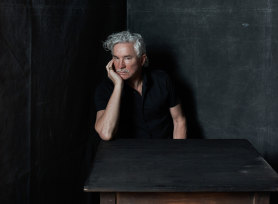 “The Goldie is a great filmmaking environment”: Baz Luhrmann.Credit:Hugh Stewart

That was a sign of how successful Moulin Rouge! The Musical had become on Broadway.

The director of the 2001 film on which it was based – not to mention Strictly Ballroom, Romeo + Juliet, Australia and The Great Gatsby – had to scramble to get tickets.

The first Australian-produced musical to originate on Broadway, the Global Creatures production’s triumphant run included 14 Tony Award nominations before it was shut down by the pandemic.

Now Moulin Rouge! The Musical is about to have a post-COVID-19 life by opening at Melbourne’s Regent Theatre in August then reopening on Broadway.

Almost exactly 20 years after Moulin Rouge had its world premiere opening the Cannes Film Festival, Luhrmann remembered how much negativity he and Catherine Martin, his wife and long-time collaborator, faced making it. And how many critics wrote scathing reviews.

“I can’t tell you how many people said the movie musical will never be successful again,” he said. “Think how much pushback there was when I took an old musical idea: to use mainly old music and reorganise it to tell a story.”

Despite those reviews, Moulin Rouge performed solidly at the box office – especially in this country – and was nominated for eight Academy Awards including best picture. Martin won two Oscars for best art direction and costumes.

Luhrmann has no doubt that the success of Hamilton on stage and the coming movies In The Heights and West Side Story shows the musical is well and truly back.

He has been editing his still-untitled Elvis movie after a shoot on the Gold Coast that was famously shut down when Tom Hanks tested positive to COVID-19 – and was only able to resume late in the year. 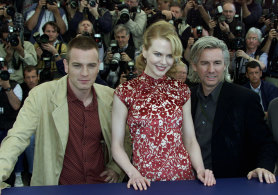 Luhrmann is guarded about revealing too much about the film.

“It’s like a pregnancy,” he said. “It might be all going really well but you don’t want to talk about your child until your child is safe.”

But Luhrmann is happy to say the performances, headed by Hanks and Butler, are “terrific” and that he has enjoyed working on the Gold Coast. 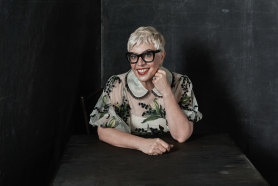 “The Goldie is a great filmmaking environment,” he said. “The food is on fire, the weather is great and the studio is great.

“Everyone just dug in deep. I think they were just aware of the privilege of being able to actually make something.”

Martin, also a fan of the Gold Coast and the safety of working in Australia during the pandemic, said it did not feel like 20 years since the Moulin Rouge premiere.

“I always think ‘oh my god, that just happened yesterday’,” she said. “I feel like I’m just getting going.”

But the now-four-time-Oscar winner – having won two more for The Great Gatsby – said what had become apparent was that Luhrmann’s movies improved with age.

“Moulin Rouge was such a fabulously risky adventure,” she said. “Back in the day, when we were making it, what did the studio hate most of all? Break-out-into-song musicals, hats and facial hair.

“So Baz just has this incredible ability to swim against the current and show people what they really want.”