The United States must lift its game and step up its economic engagement with the Asia-Pacific if it wants to compete with China, Foreign Minister Penny Wong will tell Australia’s closest ally in a speech in Washington.

In a blunt warning to the Biden administration, Wong will say investing more in regional free trade agreements and foreign aid needs to become a “core alliance priority” for the US and Australia. 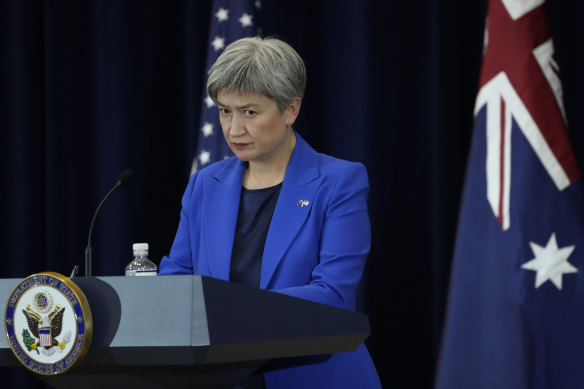 Wong’s first ministerial speech focusing on the US-Australia alliance comes a day after she and Defence Minister Richard Marles agreed to strengthen defence and foreign policy ties with the US in meetings with their American counterparts.

“US policy needs to be based on a clear understanding of what the rest of the Indo-Pacific wants,” Wong will say in a speech to the Carnegie Endowment for International Peace at 6am on Thursday (AEDT).

“The region sees development, connectivity, digital trade and the energy transition as vital domains in which consistent US leadership and influence would be welcome.”

Australia and the US, according to Wong, need to demonstrate to countries in the region that “we want to do business and create wealth with them”.

“Second, we need to demonstrate that we have interests we want to nurture beyond security interests,” she will say.

“That their interest in stability and development is an interest we share – that we have skin in the game.”

Noting the US-Australia alliance has traditionally been focused on military co-operation rather than economics, Wong will say: “To be effective in managing strategic competition, our alliance needs to be more effective in the Indo-Pacific.

“That means we have to compete not just in the traditional domains set out by our alliance. It means we need to offer the region sustained value.”

‘US policy needs to be based on a clear understanding of what the rest of the Indo-Pacific wants.’

Wong will say the US decision not to join the Comprehensive and Progressive Agreement for Trans-Pacific Partnership – a sweeping trade pact involving 11 nations – was still being felt in the region years later.

The Biden administration has stuck with former president Donald Trump’s decision to ditch the pact, reflecting a recent turn away from global free trade in the US.

The rapid take-up of the US-led Indo-Pacific Economic Framework – designed to deepen regional co-operation on trade, supply chains, clean energy and anti-corruption initiatives – since its creation in March demonstrates the appetite for US leadership in the region, Wong will say.

The annual Australia-US Ministerial consultations, held on Wednesday, resulted in an agreement to integrate Japan into joint US-Australia military activities in Australia, a significant deepening of the relationship as the three nations work together to push back on China. 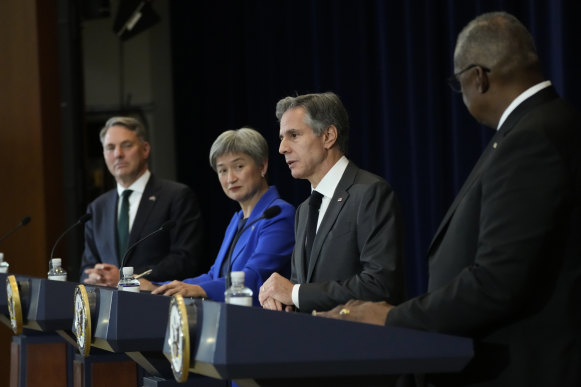 The US will also increase rotations of troops and military equipment in Australia to strengthen the alliance, US Defence Secretary Lloyd Austin announced.

“That includes rotations of bomber task forces, fighters, and future rotations of US Navy and US Army capabilities,” Austin told reporters.

Calling out Beijing for its “dangerous and coercive actions throughout the Indo-Pacific”, Austin promised the US “will not allow Australia to have a capability gap going forward”.

This was a reference to the possible period between the end of the life cycle of Australia’s current Collins class submarines and the arrival of a fleet of nuclear-powered submarines under the AUKUS pact.

Marles said the coming years “will see an increased level of activity between our two countries across all domains, which will be really important”.

“We’re also looking at increased force posture cooperation in enhancing the capacity of facilities in Australia,” he said, describing the US-Australia alliance as “completely essential to our national security”.

In her speech in Washington, Wong defends the AUKUS pact and Australia’s plan to acquire nuclear-powered submarines.

But she will argue that diplomacy, as well as greater military capability, is needed to prevent US-China rivalry from spiralling into conflict.

“Heads of government need assurance that nationalistic domestic posturing won’t sink their efforts to build safeguards,” she will say.

“We need to do more than establish military deterrents to conflict. We need to work together to create the incentive for dialogue.”