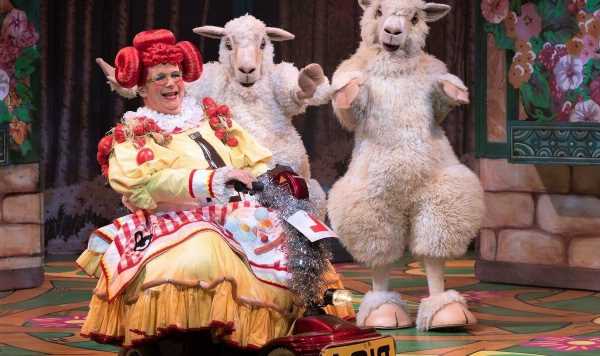 Taking the family to see Christmas pantomime is a national tradition, up there with singing carols (drunkenly) at Midnight Mass and listening to the Queen’s – or, this year, the King’s – speech stretched out on the sofa after a turkey dinner with all the trimmings. Yet despite being an integral part of the country’s theatrical heritage, the great British panto has always faced criticism and snobbery from the so-called cultural elite.

Back in the 1720s when John Rich, an actor and theatre manager, was putting on comic Harlequinade plays – forerunners to the modern panto, derived from the 16th century Italian Commedia dell’Arte – his slapstick humour was derided by high-brow thespians who believed theatre should be reserved for serious works like Shakespeare.

Despite this, panto has fans at all levels of society as well as all ages.

During the Second World War, a teenage Princess Elizabeth and her sister Margaret used to put on Christmas pantomimes for their family at Windsor Castle. They staged four productions between 1941 and 1944 and one of them, Aladdin, in which Elizabeth played the title role, may have even helped nurture a royal romance when Prince Philip, who was visiting for the holiday, saw her in it.

These days, panto is again under attack, this time from politically correct “woke” campaigners who take offence at its double entendres and risqué jokes, labelling them crude and outdated. Yet whatever its detractors may say, the fact is that people love panto, especially children. And the centuries-old formula of satirising current events through traditional folk or fairy tales works just as well for grown-ups.

We all enjoy the spectacle on different levels, and the familiarity of the scenes and sketches – slightly adapted each year to reflect what’s in the news or on the radio or TV – feeds into our childhood love of being told our favourite stories over and over again.

If John Rich has a modern-day heir to his title of Lord of the Pantomime, then surely it is Christopher Biggins who, at the age of 73, is starring in his 44th panto this year.

Speaking from his dressing room at the Darlington Hippodrome, where he is playing Mrs Smee in Peter Pan, he told the Express how panto has changed over the years.

“When I started, the principal boy was always played by a girl in fishnet tights, beautiful legs, short little dress-coat, all very glamorous,” he says. “Slapping her thighs and saying ‘12 o’clock and still no sign of Dick’… meaning Dick Whittington of course!

“But I understand why producers changed the principal boy from a woman back to a man because they wanted to give the boys in the audience a hero to look up to.

“Nowadays everyone is saying that dames should not be played by men, which is ludicrous. Because, although there is the odd dame played by a woman, it is, in essence, the man who takes that character, like in Shakespeare’s day when men played women.

“And also it’s funny to see a man in a woman’s costume, a dress and funny wigs, it’s part of the humour. Every time I come on I wear something different for every entrance and always have done. I usually have about 12 or 14 costumes for each panto.”

Originally from Lancashire, Biggins comes across as easygoing with a resilient “show must go on” attitude to his profession – the exact opposite to the overly sensitive types who are trying to take all the fun out of panto. It’s quite possibly this just-get-on-with-it approach that helped him win the seventh series of I’m A Celebrity… back in 2007.

“The trouble is that these days a lot of comics have to be careful what they say because of the woke thing,” he continues. “It’s getting ridiculous.”

Describing a previous production, he reveals: “We were in Richmond and another member of the cast did a gag which involved asking a member of the audience to kiss parts of his body. That member, who was in his twenties, complained afterwards and there was almost a lawsuit. The police had to be brought in and a statement signed. It’s utterly ludicrous because it was just a gag.”

Given the above sort of reactions, is it not enough to make a dame want to hang up her panto frock?

“Not at all, what keeps you going is the audience, they’re fantastic. You could be feeling quite low, or had a late night, and when you go to the theatre, the last thing you want to do is put on a frock.

“But the audience are so up for it, they really make you sail through a panto with their energy. And you have to give as much energy back, it’s a natural thing to do, it’s just wonderful.”

The money also helps, of course, as Biggins himself is the first to admit: “When I was asked to do my first panto in 1976, which was Mother Goose here in Darlington, I was quite appalled that they’d asked me,” he says, with mock disdain.

“I said ‘no’ because every dame I’d ever seen was in their eighties – and also I was a professional actor, I didn’t do pantomime.

Audiences north of the border, Biggins reveals, are some of the best to play to.

“I was in Dick Whittington in Glasgow with [panto legend] Allan Stewart. I’d been terrified beforehand as I was the only Englishman in a Scottish panto, I felt like an alien. But it was like a pop concert, they screamed with laughter, they loved it. Scottish audiences are something else, they’re a riot.”

While the knockabout antics on stage may make acting in a panto look easy, it’s actually all very tightly planned and orchestrated.

Newcastle-born David Wood is a choreographer who has worked with everyone from Diana Ross to Kylie Minogue and the Spice Girls. He is the go-to man for pantos wanting to put the zing into their dance routines.

David spoke to the Express as he was putting the finishing touches to His Majesty’s Theatre Aberdeen’s version of Peter Pan, which stars ex-Strictly star Brendan Cole as Captain Hook.

“Dames have had to tone down their gags to take in an awareness of what’s going on,” he says, referring to modern “woke” culture. “But dancers are taking more risks. There are more dancers around but possibly less work out there so they have to up their game.

“Everyone gets faster and fitter and so does the competition. Being a great dancer isn’t enough these days, now you have to be able to act and sing too. And the way they dance now is different to 20 years ago; it’s more physical. That’s evolution; dancers keep developing and getting better. He adds: “Choreographing a panto is like doing a musical. But whereas a West End or Broadway musical can take months to prepare, we only get two weeks.”

David reveals that doing panto, even at amateur level, is a great way for youngsters to get into the performing arts:

“Pantomime is the perfect first job because they’re learning all about the theatre and how it works – backstage, onstage, the build-up, how it’s put together. So if they go on to do a musical in the West End they have a full understanding of what the props are, what the entrances and exits are, the whole thing. It’s the perfect production for an audience to watch and for a young dancer to take part in for experience and to learn. I learnt my craft through pantomime.”

Although this will be panto number five for professional ballroom dancer Brendan, he grew up in New Zealand where pantomime isn’t really well known.

He revealed: “There was a learning curve at first. When I saw my first panto, I thought ‘What is all this about?’ for the first 15 minutes. But then you see the magic of it, how the silliness and the spectacle all comes together.

“When you have children of your own – my daughter is coming up to 10 and my son is five – you see them enjoying it, and to be in one now and part of that magic is phenomenal. It’s the job I look forward to most each year now.”

Despite the challenges and the need to adapt to changing sensibilities, panto’s days are far from behind it. As Biggins reveals: “I was worried this year about panto because there’s a lot of things going on. Money is short, people are worried about the cost of eating and heating. But we’re actually up from last year. People want to go out and have a good laugh. They don’t want to sit at home and mope. They’re saving up for a great night out, which is what we’ll give them.”

While he might not be quite such a household name as Biggins, professional dame David Rumelle – appearing in his 36th panto this year, Dick Whittington at the Epsom Playhouse – feels just as strongly about the value and sheer joy this 300-year-old British tradition brings, whatever your age.

“Pantomime is a Christmas pudding full of make-believe, magical spectacle and escapism,” he says. “It’s one that audiences new and old can return to time and time again secure in the knowledge that it’s always money well spent – to get away, even if just for a couple of hours, from the harsh reality of these hard times.

“And that’s something we all need right now.”

Long may the old dames reign!