The NSW Liberals are on track for half their candidates for next year’s federal election to be women after the state party executive quietly adopted a target in consultation with Prime Minister Scott Morrison.

The NSW executive unanimously adopted the 50 per cent target for female candidates in May but is yet to widely communicate the decision to members, The Sydney Morning Herald can exclusively reveal. 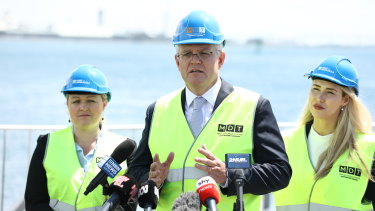 Prime Minister Scott Morrison in Newcastle with Liberal candidates Nell McGill and Brooke Vitnell. The NSW division of the party has set a target for 50 per cent of federal candidates to be women.Credit:Dominic Lorrimer

However, the target only applies to the 2022 federal election, due to be held by mid-May. The party executive would have to make a further decision if it wants a similar target in future.

At the moment, about a quarter of federal Coalition MPs are women, compared with 48 per cent for Labor. The ALP introduced a quota for female representatives in the mid-1990s and ratcheted up the level over the years since.

Ms Jarvis said it clearly made sense to have more women in a team for the perspective they brought to the table.

“At this point, we’re on target to meet the target,” she told The Herald.

The preselection timing of some key seats, including the marginal electorates of Hughes, Gilmore, Eden-Monaro, Warringah, Parramatta and Dobell is still up in the air.

However, a number of female candidates have already been chosen, such as Nell McGill in Shortland and Brooke Vitnell in Paterson. They both appeared at events with Mr Morrison during his mini-campaign tour last month. Other female candidates are expected to be announced for higher profile seats within weeks.

Ms Jarvis was confident members would “do what’s right for the party” during the preselection process but said backers of the target did need to put forward arguments as to why it was important women be chosen.

“I think they recognise on the back of what’s happened in Parliament this year, the Brittany Higgins issue, the Jenkins report earlier this week – I think there is a greater appreciation of the need to make sure that our party reflects the views of the electorate that they want to serve. And without wishing to state the bleeding obvious, 50 to 51 per cent of those people are women,” she said.

“There is a recognition that we need to have more women at the table.”

Amid intense scrutiny about the treatment of women in politics earlier in the year, Mr Morrison said he was open to quotas or targets given his party had tried the “other way” and barely lifted the proportion of women among its parliamentary ranks.

NSW cabinet minister Matt Kean and his powerful moderate faction pushed the proposal ahead of the state executive decision.

The state branch set a 40 per cent target for female candidates at local government elections in 2019.

Ms Jarvis said there was hesitancy in some quarters about both targets but in the end, “not just the women but the men came on board” and ahead of Saturday’s local government election, men had proven they were prepared to either stand aside or recognised the value of having women in the team.

“The Liberal Party is proud of the contribution made by Liberal women in politics. We continue to put forward outstanding candidates across the state, from a range of backgrounds and experiences,” the spokesman said.

“The NSW Women’s Council continues to bring women together from across the Liberal Party, to support their aspirations and campaigning, and helping to bring more exceptional women into the party.”

On Tuesday, Mr Morrison said he’d been working on the issue with the NSW division “for a very long period of time”.

This week, Sex Discrimination Commissioner Kate Jenkins recommended all political parties adopt 10-year strategies to achieve gender equality and better diversity among MPs and staff, including targets and specific actions to achieve them.

Her landmark report into the workplace culture of federal Parliament, released on Tuesday, found that gender inequality and a “boys’ club” environment was a key driver of bullying, sexual harassment and sexual assault.