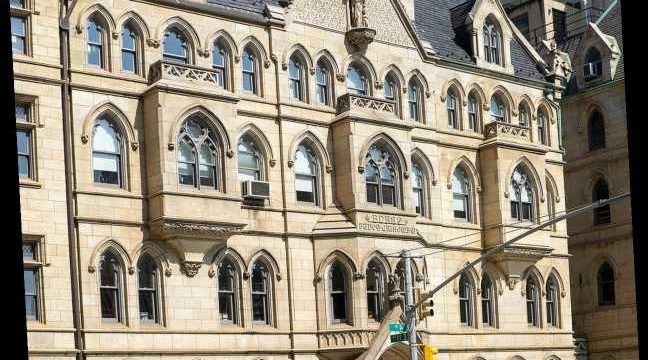 A New York City private school is defending its decision to encourage students to use more inclusive language by ditching assumptive words such as "parents" or "mom and dad," and using phrases like "grown-ups" or "family" instead.

Grace Church School, a co-ed school in Manhattan, released its "Inclusive Language Guide" in September as a way of providing the school community with language that better aligned with its mission.

"We can use language to create welcoming and inclusive spaces," the document says. "This guide addresses ways we can remove harmful assumptions from the way we interact with each other."

In recent days, however, the guide has made headlines for its suggestions, which also encourage students to use words like "people," "folks" and "friends" instead of "boys and girls," "guys" or "ladies and gentlemen."

"We're not telling people not to call their parents mom and dad. That's the silliest thing anybody ever came up with," Head of School George Davison told WCBS. "And it's not even a word police. It is rather a guide to inclusive language, if you want to use it."

In a letter to the school community, Davison said he was "proud" to be "in the eye of the culture war storm," and that having the guide would have prevented him from making an embarrassing mistake in the past.

"One lesson I learned a few years ago is that I should never assume the familial relationship between any student and the adult that is with them," he wrote. "I was embarrassed, to say the least, when I once presumed that two adults with an applicant were his grandparents (They were not). Offense was caused that could have easily been avoided."

The guide contains many other inclusive phrases for things like sexual orientation, religious observations, differently abled students and socioeconomic status.

Students are encouraged to avoid phrases like "diverse" and "minority" in favor of "person of color" or "marginalized identity/population," and to trade words like "husband" and "wife" for "spouse" or "partner."

"Not every student at Grace has two living parents; that is one reason why we encourage teachers to use language that does not presume that all of their students do," Davison wrote in his letter.

Davison told NBC News that the school is not banning certain words or phrases, but is instead just trying to avoid assumptions before they happen.

"We have been trying to help families find the right words for years and this was designed as an aid to that process," he said. "Families come in many shapes and sizes and always have. The recommendation to use the formal of 'your grown-ups' or 'adults' when you don't know is a way of ensuring that you do not needlessly hurt or alienate before you do. This is a sign of politeness and respect that we have subscribed to for decades."