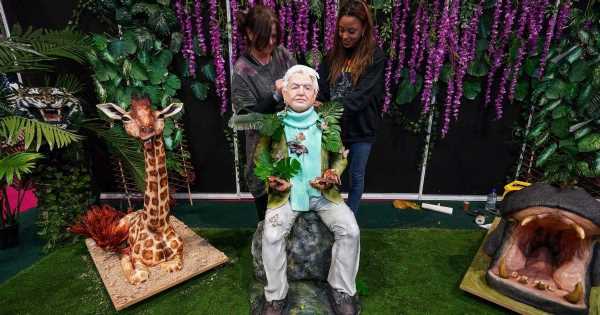 A mum-of-three has revealed how she spent 260 hours creating a life-size replica of Sir David Attenborough.

Stephanie Would, 37, is showing off her 4.5ft-high creation at the Cake International "Into the Wild" event at the NEC in Birmingham.

The artist and her team of four helpers dedicated the life-sized cake to the British broadcaster, who turned 95 in May.

To top it all off, Stephanie and her team filled it with 7kg of buttercream.

Alongside the main piece, the mum also made small replica cakes of a giraffe, tiger, hippo and an alligator.

Stephanie, from Bradford, said: "David Attenborough is a legend in the animal kingdom as well as our own.

"He celebrated his 95th birthday in May and I thought this would be a great way to celebrate.

"Elsa, who helps me, printed off many images of David Attenborough to work from.

"She usually starts with the head and then the structure through the centre of body to support the weight."

She added: "We started off making the outline which would become the sponge, which was all baked piece-by-piece."

Next the team started to slowly build it together using the printed outlines.

She continued: "We chose David Attenborough to be seated, surrounded by smaller cakes of other animals.

"By seating David, it allowed for more support to carry the amount of ingredients that went into the cake."

Stephanie admits the hardest part was to get the details of his face.

She concluded: "The tricky bit was baking from everybody's homes, then piecing in together.

"I don't have any type of industrial warehouse or ovens; it is all baked piece by piece then added slowly together."

Stephanie has run her Cake Nation business for seven years, she has previously won a silver and gold award at the Cake Show.